What great news today! My all time favorite PSN game has another sequel on its way. Deathspank, and Deathspank: Thongs of Virtue are by far my favorite PSN released games to date. Not only are they great games, but I have never laughed so hard in a game as I have with these two. The dialog is amazingly funny. With the promise of “a greatly improved follow-up” to these releases, I anticipate another, romping good time, on Deathspank’s “quest for the Fires of Bacon.”

The following Press Release sums it up best:

DeathSpank returns for an all new adventure in The Baconing as he faces his most dangerous foe yet in the Anti-Spank as he tries to locate the Fires of Bacon. Players will settle in for the fun and familiar Monkey Island meets Diablo experience as the Vanquisher of Evil sets out to meet new acquaintances and some old friends in an all new science fiction post apocalyptic world with lots of exciting surprises, quests, puzzles and enemies.

Battle four all new bosses like the Minorque, fight alongside a new sidekick named Bob from Marketing, tame an all new insane level of difficulty and visit all new locations such as The Forbidden Zone, The Forest of Tomorrow, Barnacle Lake and others as you seek out to find the locations of the infamous Fires of Bacon to once and for all destroy the evil power of the thongs.

Enjoy the feel of countless gameplay improvements to the combat system. Dizzy enemies with the shield bash, deflect ranged weapons back at enemies and use devastating charged attacks to send a message to foes. Players will feel more in control of the battle situations than in previous DeathSpank games, providing gamers with opportunity and choice when engaging the enemies which stand in DeathSpank’s way.

DeathSpank begins the game within the confines of the city of Spanktopia which will eventually lead him to the first opening boss fight with the Minorqueâ€¦let the quests of Justice begin. Get ready for an all new and improved adventure with everyone’s favourite Vanquisher of Evil in “The Baconing!”

The developers at Hothead told Kotaku, that this new game will include “more than 100 new quests, a new story, more than 70 characters (mostly new), more than 80 new weapons, new areas and a new, tougher difficulty level.”

The Baconing is scheduled for a PSN release this summer.

Sony Reports Yet Another Security Breach. 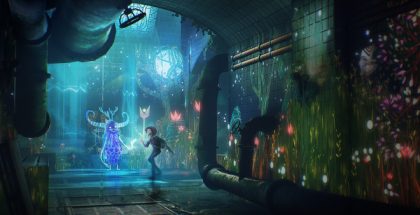