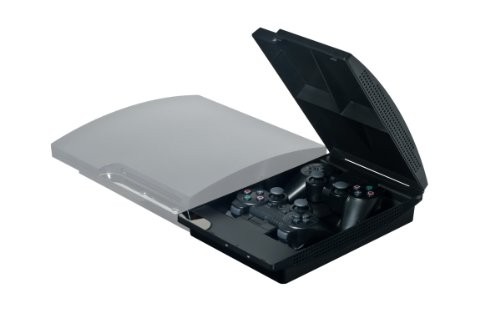 Duracell announced today the Duracell Extender for the PlayStation 3. The expansion bay attaches to the PS3 Slim Model and adds additional ports, SD card ports and the ability to charge multiple Dual shock’s. Here is the official announcement:

Wireless controllers for the PlayStation 3 provide comfort and freedom during a game. Until they need charging: then the controllers have to be attached to the console with a cable again. Tiresome untangling of the mess of cables before the next game is therefore unavoidable. The Duracell Extender offers a much more practical solution. Specially adapted to the design of the PlayStation 3, this charging device hides two USB inserts for two wireless controllers under its lid. These can then be easily inserted into each USB port and can thus be charged in parallel. At the same time the sturdy, hard case is ideal for keeping controllers safe and protected. In this way they are safely stowed away and ready at any time for the next game. The box matches the PlayStation 3 in its look and depth. With the guide rails on its base, the charging station can be attached to the console, integrating seamlessly into the appearance of the console ensemble.

In addition, the Duracell Extender has five additional inputs. At the front there are two slots for memory cards: one for SD cards, one for memory sticks. By connecting up the PlayStation 3 and the Duracell Extender, it’s not just photos, music and videos that can be viewed or played on the television directly from the storage medium. States of play during games, for example, can also be conveniently stored this way on a memory card or stick and kept ready for the next gaming session. The Duracell Extender also boasts three further USB ports, which are at the back of the device and are therefore unseen by the observer. Peripheral devices, such as a USB adapter for Singstar microphones and radio dongles can be plugged into the device conveniently and without spoiling the look. The Duracell Extender therefore offers a logical upgrade of the somewhat minimally equipped PlayStation 3 with its two front USB ports.

With its own power supply, the Duracell Extender remains independent of the PlayStation. The console can also remain switched off while charging. To ensure that the user always has an overview of the controllerâ€™s battery status, two status displays give information on the current level of charge.

Thanks to its straightforward operation for charging and its additional ports for storage media, the Duracell Extender offers the perfect addition to the PlayStation 3.

So what do you think of this being released for only the Slim model line?

Further Down The Rabbit Hole