If you’ve watched some of the gameplay demonstrations of the Vita during the conference, besides the obvious hit that will be Uncharted: Golden Abyss, a couple other titles were shown based on PS3 franchises, namely LittleBigPlanet and ModNation Racers, the two games that really spearheaded the Play, Create, Share movement we’re starting to see from other developers. And I gotta say, these titles seem to be right at home on this handheld. Much more so than PSP. I would even go so far as to say that these versions of the games may very well be the best versions.

ModNation Racers was shown first, showing off much improved load times over the PS3 version. But that wasn’t the coolest bit. What really stood out was the use of the touchpad on the back and the touchscreen. You can literally draw out your track on the screen, and when you’re editing the track after drawing it out, you can easily use your fingers to create jumps, or raise or lower the background scenery/terrain. Although it looked a little jumpy, being able to do that is still a very intuitive way of editing tracks. You even have access to all of the creations from the PS3 version as well.

And then you have LittleBigPlanet. After seeing the trailer for this one, I was awestruck. It looks great (could pass as PS3 quality), and the new types of play mechanics available (that, from a gameplay standpoint, aren’t even possible on the PS3 titles) instantly makes this a must-have. From using the system’s tilt functionality to being able to play little board games with friends on the same screen, there’s a lot of possibilities as far as creativity goes, and I will definitely have to pick that title up upon release. Be sure to watch the videos below! 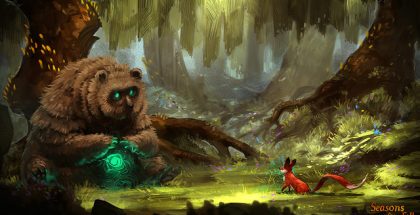