I couldn’t pass up a chance to try this out. In the demo you can control a helicopter or a fighter jet. First I tried out the helicopter, the battle takes place in a city. You assist other troops on the ground. Targets include regular guys with rocket launchers, anti-aircraft guns, trucks & tanks. When you are close enough you can lock onto a target and use your mounted machine guns or 2 different types of missiles in this demo. Sometimes when you take out a target you get a nice quick cut scene of the destruction then right back into action. Near the end of the demo you get to take on a few enemy helicopters. Then you finish the demo off with taking out a bridge with supply trucks on it. 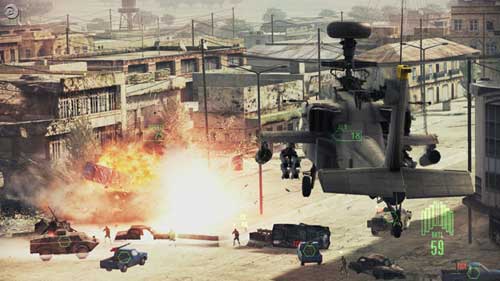 The helicopter is easy to control after you get used to the layout. I didn’t like using cockpit view in the helicopter because sometimes the target is hidden behind the pillar of the cockpit. So I stayed in either 3rd person view or 1st person view. The graphics of the game are good too, everything is pretty detailed. Sometimes on the close up cut-scenes it didn’t look as polished, but then again this is a early build of the game. It was very satisfying to launch missiles and in the process take out a big cluster of enemies on the ground with a grand explosion.

I didn’t play the full demo with the fighter jet, be enough to get a good feeling on the game. I jumped in halfway threw the demo after somebody left the game. My goal at the time was to take out the leader and following planes. When you get close enough you can press L1+R1 (I think) and that takes you into the close up chase view you have seen in the trailers. The game auto-pilots for you at this point so it follows the plane wherever it goes. But don’t think it’s easy at this point. You can’t just sit there and fire off bullets or rockets. It’s still a challenge to take the plane down. It’s very rewarding when you finally take them down.

Overall I enjoyed the game, just wish I had more time with it to really get used to the plane as well. I’m really looking forward to Ace Combat: Assault Horizon which is out October 11, 2011 in the USA and October 14, 2011 in the UK.

Vita Likely to be Region Free