Playstation Vita, The Meat and Potatoes. 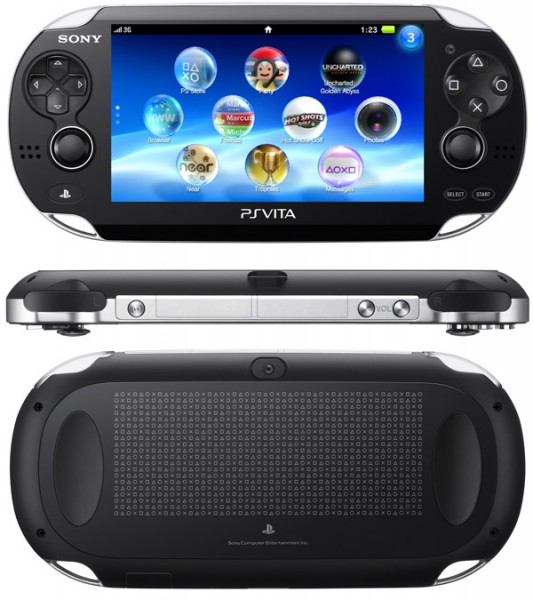 Sony Playstation Vita has a specification 6-axis motion sensors, dual analog controller, front and rear camera, OLED touch screen type, and the touchpad on the back. Vita has a 4-core ARM Cortex-A9 CPU and a 200 MHz SGX543MP4+ GPU.

Sony and other devs have praised the power behind this little (well not so little) machine so much as to say porting HD games to it will be very simple. This seems to be leading to a lot of cloud based game saves in which you can play a game on the PS3 and pick up where you left off on the Vita (or vice versa).

Hit the Jump for “The Potatoes”

BlazBlue-Continuum Shift II Plus
Description: BlazBlue is a high definition 2D fighter from the makers of Guilty Gear. Players throughout the world can participate in online matches, or enjoy the immense story mode featuring individual stories for each character. This is a second edition of the Continuum Shift arcade expansion edition (which originally added two new characters: Tsubaki and Hazama.) For Continuum Shift II, the character Valkenhayn R. Hellsing is now a playable character

Call of Duty
Description: Some form of the popular war fps title.

Dragon’s Crown
Description: Dragon’s Crown thrusts you into a fantastical medieval world packed with labyrinthine dungeons to explore, vile monstrosities to smite, and nearly endless online adventure. Your mission is to dive into the dank underworld, uncovering treasure and strengthening your mettle as you unlock the secret behind the ancient dragon threatening the world. Simple, easy-to-learn controls allow anyone to dive into the fray and enjoy the breathtaking sword-and-sorcery action. In addition to long-lasting gameplay, the game also features a vast array of character customization features – with six wildly different classes to play as, raiding the catacombs for epic loot remains fresh and engaging.

Dungeon Defenders
Description: Dungeon Defenders is an original hybrid of two hot genres: Tower Defense and online Action-RPG! The game puts players in the role of one of four distinctive hero classes, tasked with fending off hordes of invading beasties by strategically summoning a variety of Defenses & Traps throughout their castle.

Dust 514
Description: DUST 514 is a PS3-exclusive persistent shooter focused on intense infantry combat augmented by powerful vehicles. Uniquely, it is set in, and directly connected to, the thriving player driven universe of EVE Online.

Dynasty Warriors
Description: In this Tactical Action game players can enjoy the thrill of taking down thousands of enemies and become the greatest hero in Chinese history. This version of Dynasty Warriors, built for the Playstation Vita, will allow players to use the systemâ€™s touch pad and sensor for intuitive controls and also allow players to connect together and enjoy an epic experience. The game will utilize the breakthrough hardware that is the NGP to deliver a new dimension to the famed Dynasty Warriors series!

F1 2011
Decription: In F1 2011 players will be challenged to Ã¯Â¿Â½Be the driver, live the life, go compete,Ã¯Â¿Â½ with wide-ranging technical and gameplay advancements on and off track and vastly extended competitive and co-operative multiplayer components. F1 2011 will feature all of the official teams, drivers and circuits from the highly anticipated 2011 FIA FORMULA ONE WORLD CHAMPIONSHIP, including the current FIA FORMULA ONE DriversÃ¯Â¿Â½ World Champion Sebastian Vettel. The 2011 season also sees the debut of the 2011 FORMULA 1 GRAND PRIX OF INDIA at DelhiÃ¯Â¿Â½s Jaypee International Race Circuit and the return of the iconic NÃ¯Â¿Â½rburgring to the calendar.

Little Devients
Description: Little Deviants is a 3D Platformer game, developed by Bigbig Studios and published by SCEA, with no announced release date.

Little Big Planet
Description: A spin off of the popular PS3 series LBP that takes your custom created sackboy or girl on great adventures.

Modnation Racers
Description: ModNation Racers is a Kart Racing game, developed and published by SCEA, with no announced release date.

Rayman Origins
Description: One of the first multi-platform handheld games that will be on both the Vita and the 3DS. This game will also be on the PS3.

Resistance
Description: Resistance (working title) is a Sci-Fi First-Person Shooter game, developed by Nihilistic and published by SCEA, with no announced release date.

Rugby Challenge
Description: Rugby Challenge is a Rugby game, developed by Sidhe Interactive and published by Home Entertainment Suppliers, scheduled to be released in 2011.

Ruin
Description: Ruin is a Beat-‘Em-Up game, published by SCEA, with no announced release date. Ruin will share cloud game saves with the PS3 to where you can save your game and pick up where you left off on the other system.

Smart As
Description: Smart As is a Logic Puzzle game, developed by XDEV and published by SCEA, with no announced release date

Stardrone
Description: In StarDrone, players pilot their Drones across the galaxy, collecting pieces of Equilibrix in order to restore the equilibrium of the universe and stop the evil…

Street Fighter X Tekken
Description: “Street Fighter” is best known for its well-polished 2D game play, and “Street Fighter IV” is an exemplary addition to the series. And now, based on the “Street Fighter IV” engine, the “TEKKEN” characters will be stepping into the ring to fight. Featuring two on two “Tag Team Fighting”, and together with Battle and Training Modes, this title will push the series beyond its limits.

Super Stardust Delta
Description: Based on the popular PSN title Super Stardust HD where you shoot asteroids made from different elements so large and fast it makes your eyeballs sweat.

Top Darts
Description: Top Darts is a Miscellaneous game, developed and published by SCEA, with no announced release date.

Uncharted: Golden Abyss
Description: Follow Nathan Drake on this exclusive Vita adventure that puts the feeling of the PS3 Uncharted in your hand.

Virtua Tennis 4
Description: Virtua Tennis 4 with the PlayStation Move is more than just hitting the ball; it’s about the angle of the racquet, the spin and speed of the ball and the power of the shot. The advanced motion sensors of PlayStation Move precisely track both the fast and subtle movements of the controller allowing for pinpoint accurate shots as players improve their racquet skills. Virtua Tennis 4 will also support 3D technology delivering unprecedented realism to the tennis experience, bringing you closer than ever to being out on the court.

Wipeout 2048
Description: WipEout 2048 is a Futuristic Racing game, developed by Studio Liverpool and published by SCEA, with no announced release date.

WWE ’12
Description: WWE ’12 will celebrate the rebirth of the iconic and authentic simulation franchise through a bigger game, badder presentation and better gameplay than ever before, delivering long-awaited critical improvements to the core gameplay experience, the most creative and extensive feature set to date and a visceral, edgy and polished presentation.

A lot of things about the Vita are still largely unknown. To start with, Konami’s “Transfarring” phrase that was coined prior to E3 and mentioned numerous times at Konami’s pre-recorded E3 video.

Konami has stated that all future Kojima Productions games will be Transfarring enabled. Does that mean that the games will be playable on both the PS3 and the Vita or some other type of connectivity? If they are playable on both, will we need to purchase both copies individually or will they come bulked together?

Above and beyond simply playing the game, many online modes are said to be cross platform between the PS3 and the Vita. Wipeout 2048 is one example of this happening. The way it sounds, only certain maps will be playable between the two units. Capcom’s Streetfighter X Tekken also states that there will be some connectivity between the Vita and the PS3 which I assume means online competition.

While we are discussing online, how about Dust 514? A battle taking place in the universe of the MMO Eve, yet Dust is an MMO in its own right or so the dev says. Somehow this game will have a Vita connection that will be playable and works with the PC/PS3 version of this MMO.

The ingredients making up the Vita and its online seems to be largely unknown and a company secret.

I had a chance to test out several little morsels of Vita that left me wanting more. Each had their own palatable sapidity.

I had some alone time with this game in the SCEE private showing room on the top floor on the very last day. I have to admit that I am not very aware of the BlazBlue series and I have not played it before. The game moved and played flawlessly yet the characters movements felt clunky. I attribute that to the type of game it is and my ignorance of said game rather then a subsequent Vita issue. The game looked glorious however. BlazBlue-Continuum Shift II Plus tastes like a chocolate covered biscuit/cookie a la Pocky. Surely to appease the Japanese fans.

Another game I fiddled with and had no idea what I was doing. While looking beautiful, I could not figure out how to hit the ball. Trying to use the touch screen, I kept lifting my golfer off of the fairway and into the air scaring the bejesus out of her. I’m sure had I started the game from scratch, there would have been a tutorial explaining everything to me. For Hot Shots Golf fans, I think you will be pleased. Reminds me of a subway sandwhich. Then again, maybe I watched too much Happy Gilmore.

A collection of mini-games using all of the Vita’s new control schemes yet it feels full. I played a few different levels of this game that used the camera, touch screen, back touch pad and sixaxis. Many of them at the same time to the point I was even worried about dropping it at one point. Despite the fear I would drop “my precious” into the fiery pits of Mordor, I had a great time wiping green slime from the Vita screen. This will be a fan favorite for fans of Eye Pets and most iPod games. Little Deviants gives a sweet but salty flavor with a hint of green slime.

The classic and ever popular LBP but this time on the Vita. I will say one thing about this game. Best version ever! The multiple touch controls on both the front and back as well as many other types of controls that come natively with the Vita allow for a much deeper experience. From moving objects with your finger, spinning wheels or making your sackboy (or girl) follow your finger underwater inside of a bubble, this version rocks. This is a hot fudge sundae covered in caramel and whipped cream with brownies!

Music at your fingertips in the form of an artistic platform game. Making music by solving the puzzles of many puzzles to progress through a basic but beautiful platforming world. The game was fun but I often got annoyed at trying to jump to other platforms without dying. It surely will be a favorite among many Vita owners however. I get a ring pop flavor from this one.

Nathan Drake? On a handheld? Thats just as good as the HD versions? No need for a description of this game. It tastes like Winning!

Not a tennis fan, but I did enjoy my time with this game. I was capable of putting top spin or bottom spin on the tennis ball with the front touch screen. It can be a little easy at times, but that could just be the demo itself that I played. Tastes like Avian water.