The line for Starhawk was never very long at E3 for some odd reason. I usually just had to wait for the current game to finish for my turn at the game. When you spawn, you get a top down view of the battlefield and you get to choose where to drop your pod in your home base. You can steer it slightly when it’s falling in mid-air. What’s cool is you can actually kill others when you land! I never got to see this in person, though. After you land, you press square to burst out of your pod. 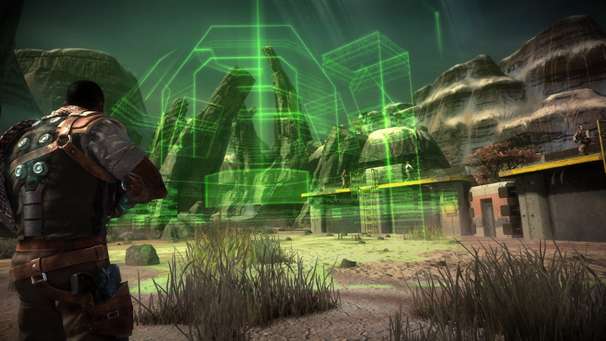 You slowly earn rift energy, even if you don’t actually kill anyone. You earn it quicker if you kill or steal flags, etc. You lose your rift energy after you die, so use it or lose it. After you earn enough rift energy, you can start to build structures like walls, vehicles, tracking lasers, and, most importantly, a Starhawk hanger, which costs a whopping 8 slots of your rift energy. For vehicle structures, it comes with a jeep you can hop in right away, but if you want another, you have to use some rift energy to make a jeep appear. The mode available at E3 was capture the flag, so it was important to set up walls and tracking lasers to slow down the other team.

Unfortunately, our team didn’t do very well at setting up walls and lasers, so when I made a run for the flag in a jeep, I could barely drive around the walls they had set up. Actually, I had to drive on the side of the mountain a little bit; managed to get a flag back once. A lot of my kills where running over people in my jeep. 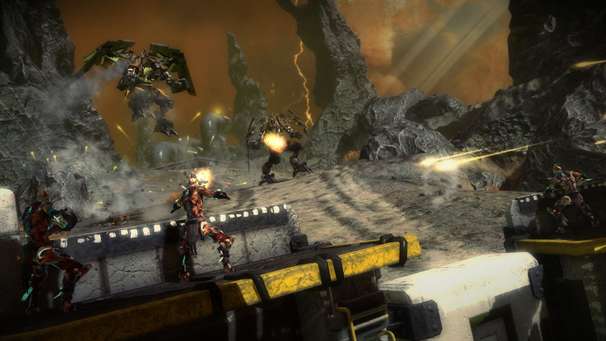 The Starhawk is fun, just wish I had more time in it before I died. Flew around for a bit, but since there where no other Starhawk in the air, I transformed into a robot in mid-flight and landed on the battlefield and took out a couple guys running around, then took off. The transforming process is pretty quick.

When you’re on foot and trying to gun someone down, it locks onto the enemy when you get close enough, but you have to keep aiming in that general direction. It doesn’t follow for you. It just snaps to the target when you aim close to the enemy.

If your team really works together, you can dominate the other team if they play like most people online. Every man for himself. I was a big fan of the original Warhawk. I was in the beta and picked up the game day 1. Had a lot of fun with it, too. I’ll be picking Starhawk up as well. I don’t think you’ll see as many people flying around as you did in Warhawk, since you have to essentially “buy” your Starhawk instead of just hopping in a empty one. I have heard there are Starhawk-only levels, so it will be nice to have a massive dog fight in space.

I’m really excited to get this game. But I’m glad it’s not out until next year. So many awesome games coming out this year!