StarDrone is a high-speed action thriller with a mix of arcade action, pinball, breakout, physics and collect-the-objects. PlayStation 3 version is compatible with PlayStationÂ®Move motion controller and playable with normal DualShock or SixAxis controllers and created for HDTV and stereoscopic 3D (coming with separate patch). The game features over 50 levels of unparalleled gaming experience and extraordinary replay value.

Cause your attackers to crash with rapid speed while collecting gems and power-up enhancements. Overcome perilous hazards and elude zillions of enemies in an effort to complete each stage with a record score. With simple gesture controls and unique, intuitive game play mechanics, StarDrone is friendly to beginners, at the same time challenging enough to bring you back for more and more.

What you really want to know RIGHT NOW is… how do you play?

You can control the action with the Dualshock 3 by moving the analog stick to choose the beacon you want to use as a traveling aid and press a button to go round and round, like a record. Star Drone is also PS Move compatible. How compatible? You point at the screen to highlight the beacon you want to use as an anchor point so you can orbit around it and press a button to lock your on it. Letting go of the button will send you flying depending on at what angle and direction your unit was before being sent on a journey through the stars. This video will help you understand how the game works:

I like the music and so will you! StarDrone has some fast paced and exciting music to go along with all the bright colors and effects displayed on screen. Said music had the advantage of never feeling dull, repetitive, shallow, unnecessary, “just because” or all of the above at any time during my many hours of game playing.

The levels start out very small and take just a couple of seconds to be completed but this is mainly to allow you to get the hang of things. Said threshold is reached once you’re at either level 3 or 4 at the latest. Then you like, totally, like, find your groove at level 6. You even get to see a map for the level you’re currently hovering over on the level select screen which helps you get an idea of how difficult said map can be once you go, go, go!

Want some extra motivation? You can obtain medals for your fast paced effort… which is a bit hard at first. You see, medals are tied to your completion time for each level and since you have to finish them very quickly to make the grade. You might be a bit annoyed when you don’t get a medal on your first try. It pretty much seems like the game is asking for perfect, synchronized runs but eventually you get “in the zone” and find yourself obtaining silver or gold medals on your first try.

– Collect all stars: Get ALL stars on the level to progress onto the next one.

– Collect all star shards: You see, there was this big star that got shattered so we would like you to go and gather all the pieces and bring them back. Thanks!

– Get to the finish line: Race for the giant green GOAL circle at the end of the path. Easy, right? Oh, you’re so, soooooo wrong.

The fact that collecting stars isn’t the main objective of the level doesn’t mean you shouldn’t go out of your way to obtain as many as possible. First of all, they add up to your score total for the level and that in turn allows you to go up on the leaderboards as you shoot for the number one spot. Second of all, collecting enough stars will allow you to enter Comet mode so you can start to sparkle and grow spikes that help you destroy your enemies simply by saying hello to them as closely as possible.

Eventually you realize you actually have a health bar that needs to be carefully managed. Hitting a Creeper (creepy spherical baddies), being blasted by a rocket or thinking mines are your friend (they’re NEVER your friend, ok? Not even when they bring a bottle of wine or some sweet, sweet cake to a small get together) takes some of that away which is why you must then start to take into consideration that there are health recovery items sprinkled around each level that will prevent you from ending your tale oh too soon… restarting the level is what it is called. FYI: as Mega Man has taught us, spikes are a one hit kill so you must avoid them or else suffer the wrath of the pointy tyrant!

There are three power ups available to help you out on this endeavor:

You go crazy! Watch as rage and anger enter your unit and suddenly transforms it into a lean, mean killing machine. Any enemies near you are instantly taken care of as you dash into one after the other until either they’re all gone or your Berserk time runs out.

Having trouble reaching for the stars all around you as you fly? Grab a Magnet and then stars will want to be near YOU. Any stars even remotely near your unit will be drawn closer and added up to your collection with the greatest of ease.

Sneaky move! Enemies will be unable to see you which makes each trip easier on your thumbs BUT if you, for some reason, decide it’s a good idea to crash into them without having entered Comet Mode… you’ll get hurt, and pain is not something you want right now. 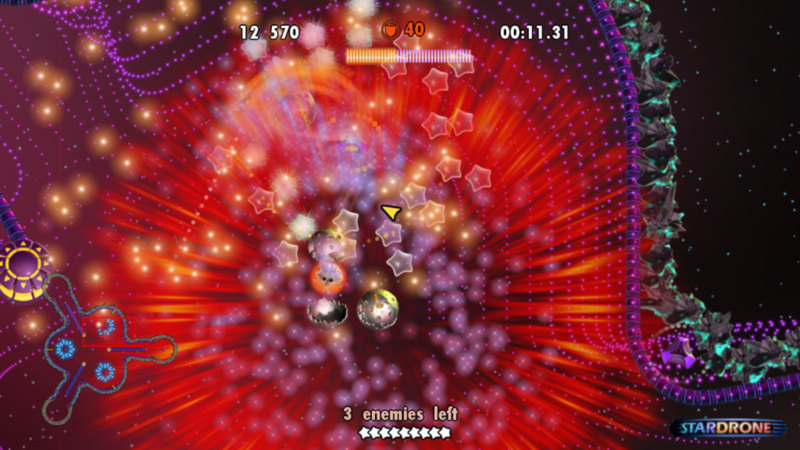 Avoid floating mines, rockets and the turrets from which they spawn, Creepers and other hazards to fulfill your destiny and complete all 53 levels included with your purchase, just as the prophecy had established all those centuries ago! Just be careful of level 39. Had to do that one over 100 times before finally being able to bid it adieu. It was the ONLY level I had a problem with so maybe it was just me being “off” for a moment but ooooh how I never want to see good old 39 again. Still, one level out of 53 that gave me a hard time isn’t something to dock several points out of a game that carries around lots of Fun-Fun with it.

– Game was completed before writing this review.
– All trophies obtained.
– Total amount of time played: 5 hours.
– This review is based on a retail copy of the PS3 version of StarDrone provided by Beatshapers.