I was sitting, live, in Sonyâ€™s E3 press conference, when Valveâ€™s Gabe Newell made a surprise appearance (and an even more surprising announcement). Valveâ€™s Portal 2 would soon be coming to the PS3. For those of you that donâ€™t know, Portal 2 is a first-person action/puzzle video game that has both single and two-player co-operative game modes. Portal 2, was one of the most anticipated games of the year, and is the sequel to the title that earned over 30 Game of the Year Awards in 2007. So, is this sequel worthy of the same awards?

At this point I need point out that there will be a few story spoilers ahead for people who have not played the first portal. 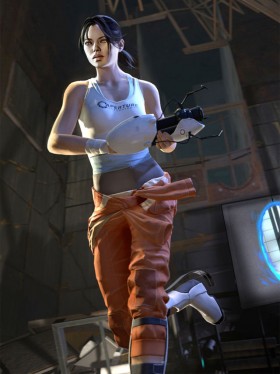 In the single player game, you play as Chell, a human female test subject who has awoken after centuries of being in a hibernation. Chell is trapped in the Aperture Science research facility, and is being made to test a teleportation gun by a sarcastic AI named GLaDOS. GLaDOS plans on tormenting Chell by having her test the portal gun through an endless number of test chambers. On the bright side, Chell has another AI, by the name of Wheatley, trying to help her escape from these endless deathtraps.

The main focus of the game is trying to figure out how to get from the entrance of the test chamber to the exit. Your only real tool in doing so is your “Portal gun”, which is able to create two portals, one orange and one blue, against portal-receptive walls, allowing you to instantly move you from one portal through the next. It’s as easy as walking through a door. The key to using the portals efficiently is putting them in the right place, at, sometimes, the right time.

To make things interesting, there are boxes you need to set on buttons to open doors, boxes that reflect lasers used to destroy turrets or activate things, and other fun items added as you progress through the game. 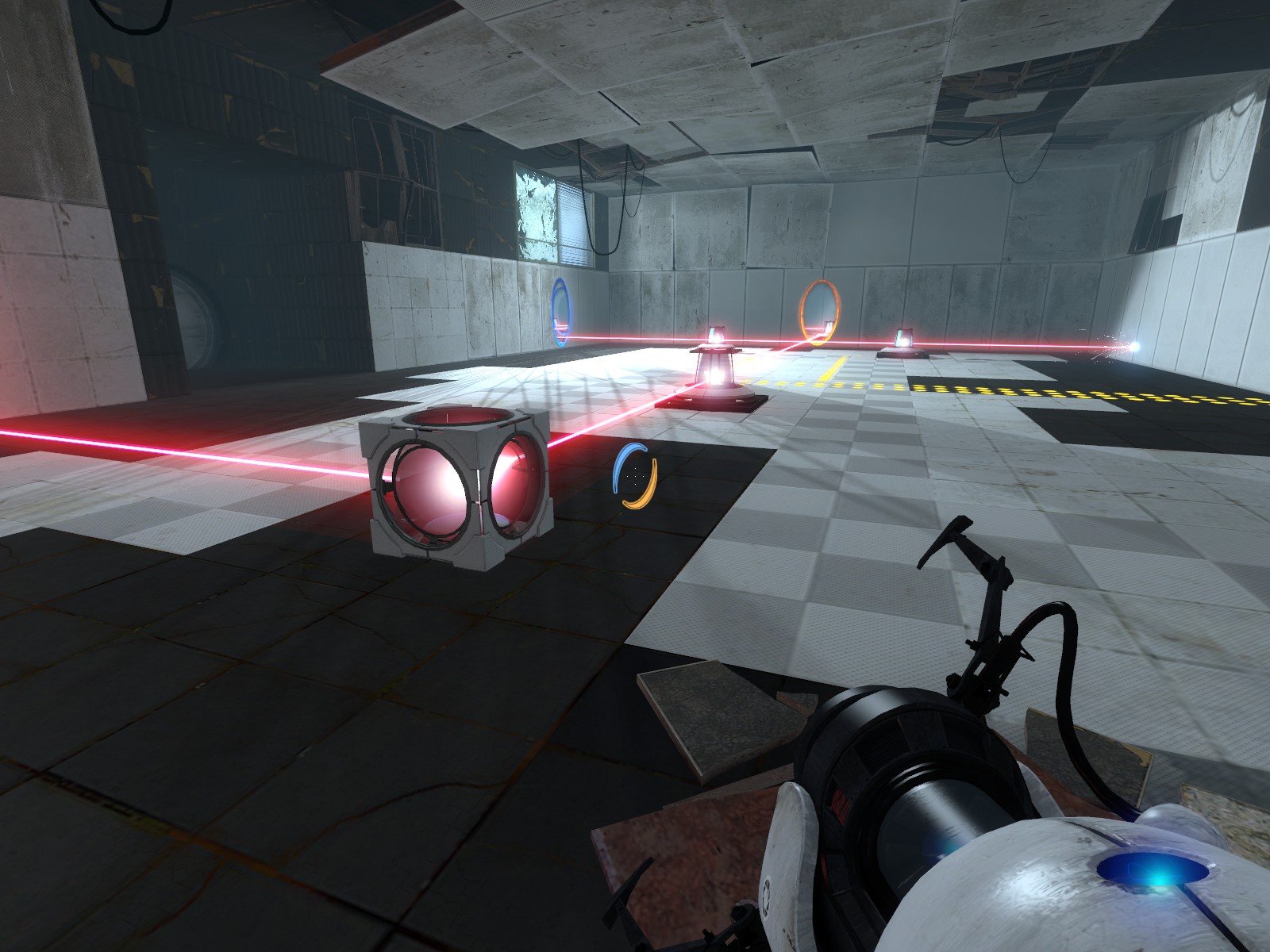 Portal 2’s testing chambers start with the basic concepts of the portal gun and progressively add new items, or inventions along the way. I mentioned the boxes and lasers, however the game also adds hard light bridges, used to walk on, or block turrets from shooting you; convection funnels, waves that move you toward or away from their emitter; and faith plates, catapults to launch you or items through the air. There are also three different colors of gel like paint, each with unique properties, added in later levels. These gels allow the walls they are painted on to become bouncy, speedy, or portal-receptive. 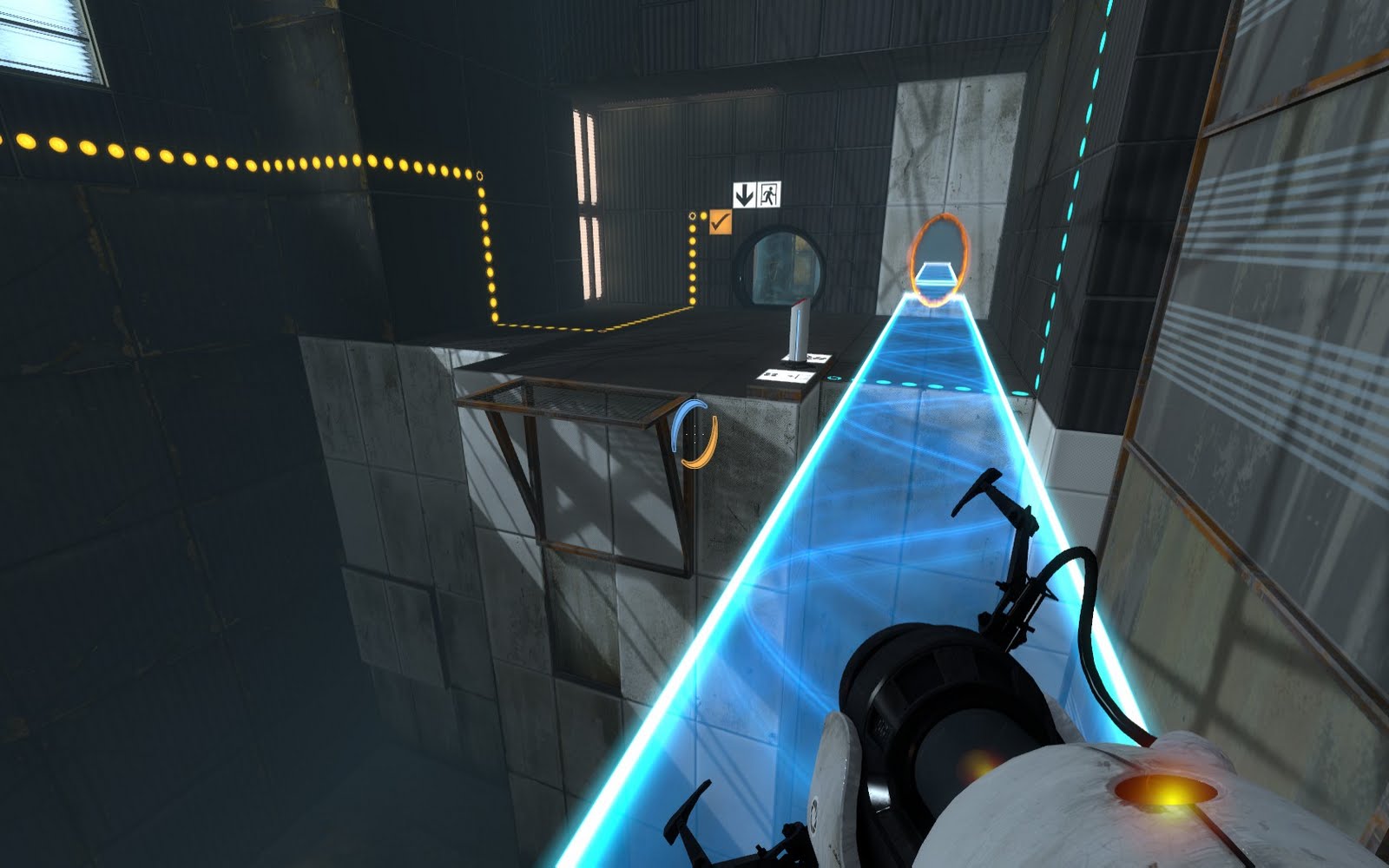 Although some are pretty straight forward, some of the puzzling test chambers can be quite a challenge and require all of the inventions to proceed. For example, you might need to use a box, to deflect a laser, to activate a convection funnel, to push you through your portals, to land on a light bridge. You might then need to reposition your portals to allow the light bridge to appear somewhere else, allowing you to set a box on a button that opens the exit door. Next you’d need to figure out how to get yourself to that exit. 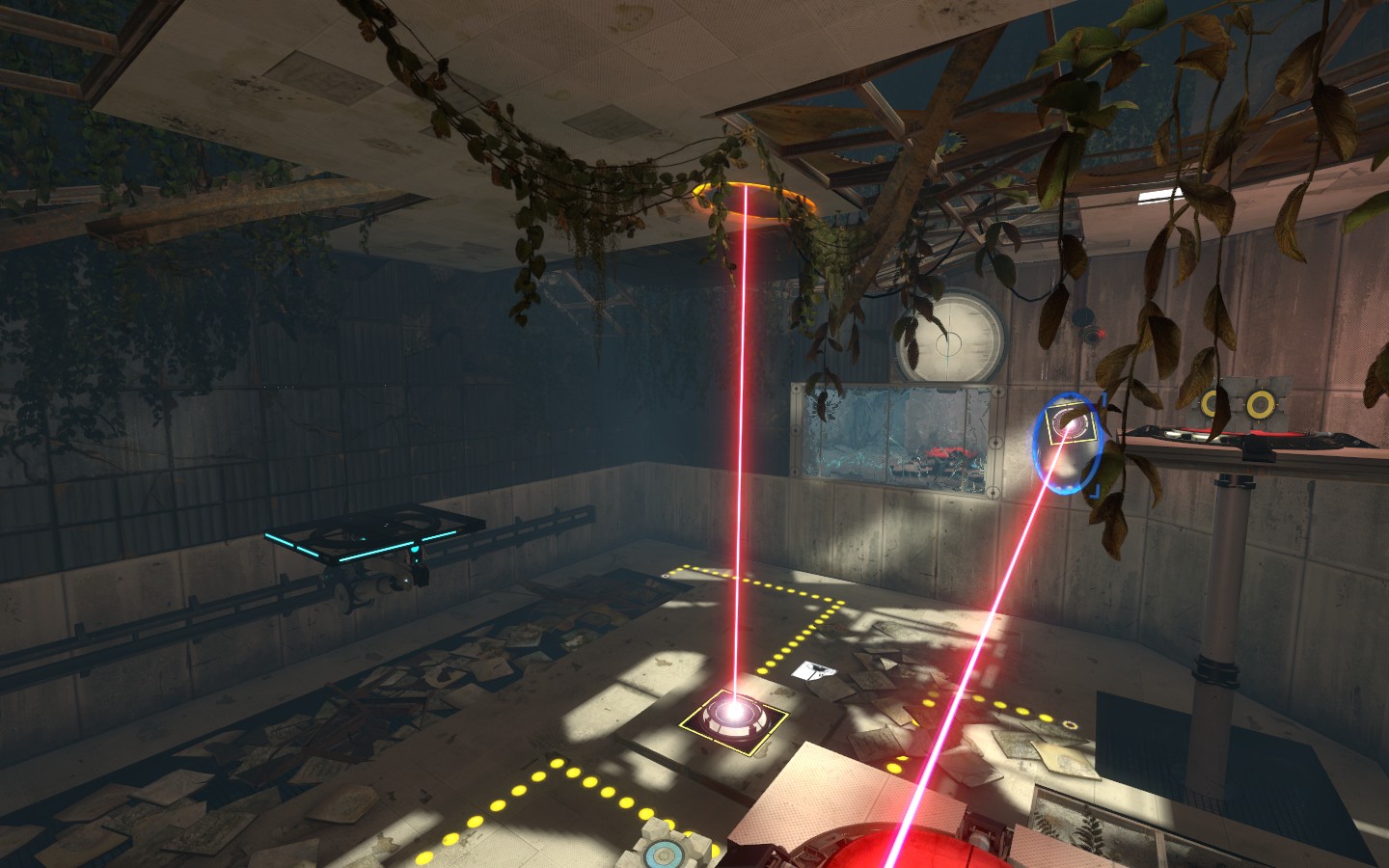 Along the way, from test chamber to test chamber, you will also travel through the old Aperture Science research facility that can actually become quite a treat for the eyes. Visually the game is much better than I was expecting it to be. You will need to use your tools in these areas to progress through the game as well. Shooting one portal on a slanted wall, while shooting the other at the bottom of an elevator shaft you jump into, might be necessary to pick up enough speed and momentum to be launched to that platform way over there.

The game was extremely fun and addicting. Solving the puzzles was also very gratifying, especially the ones that seemed to not have a possible solution, until that light bulb went off in my head. YES!! I am a genius. The problem with fiishing the single player story, was that I wanted more. Lots more. Good thing the co-op was just as much fun.

In co-op, you and a friend play as one of two test robots, Atlas and P-body, either via on-line or local split-screen. GLaDOS is again, your sarcastic protagonist, leading you through the more than 40 test chambers. 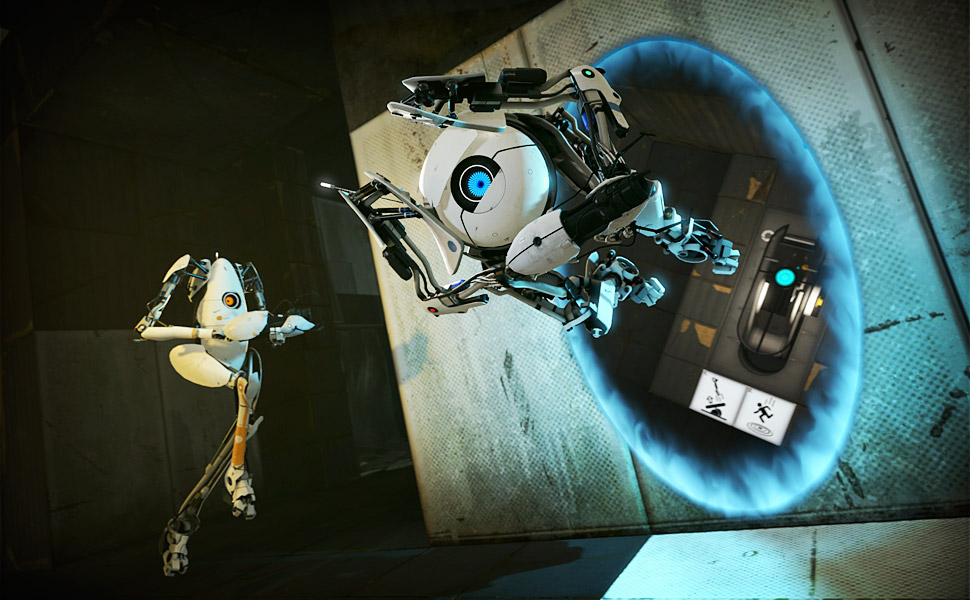 Each robot, or player, can shoot two portals, opening up a whole new level of puzzle solving. The two players need to work together to solve every test chamber. Voice chat comes in very handy, and so does an integrated gesture system, that allows you to identify a certain area, or to even start a countdown, helping you communicate with your partner, on how to solve the puzzle. “Put the portal right here on my pointer,” vs. “No, the other wall. Now down 2 inches. No up a bit..,” etc.

Other gestures make for a funnier game, including multiple dances, high-fives, and even one that allows you to dismantle your partner. If your robot dies, it will immediately reassemble at the beginning of the current test chamber. This also allowed for many fun antics, such as moving a portal at the last second, causing your partner to launch to their death, or fall into acid. My son and I even made it a game, as we tried to outsmart one another. 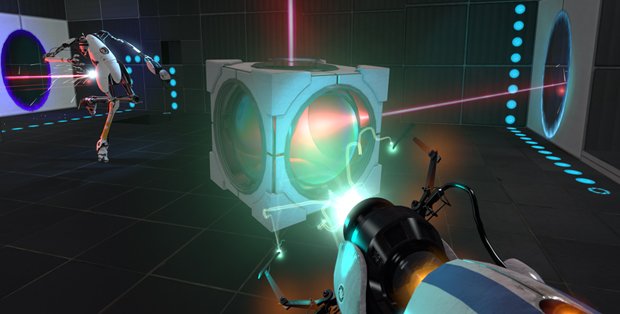 Compared to the single player game, the puzzles in co-op can be even more complex. In one test chamber, after about 45 minutes, my son and I got so annoyed with not being able to solve the room, that we decided to turn the game off and come back to it later. When we started back up, we literally solved the puzzle in under 3 minutes. We had forgotten one of the most basic principles of the game, because there was so much else going on. 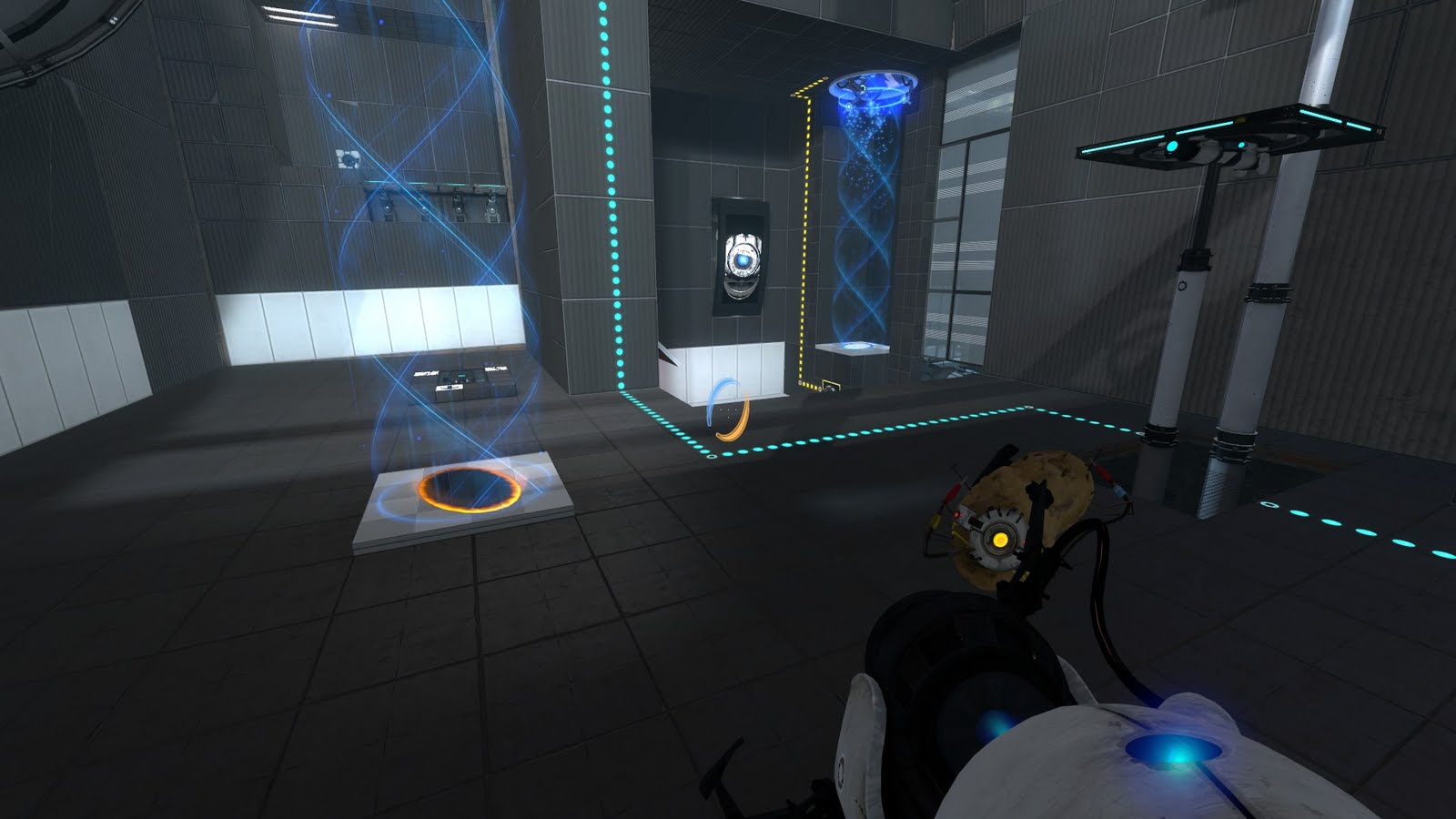 One of the complaints I’ve read about from some, is that the game is short. That is not true. I didn’t keep track, however I’m pretty sure I had at least 9 hours in the SP, and about 6 in the co-op the first time through. Re-playability really depends on if you want to try and beat previous times, or collect those trophies you might not have gotten the first time through the game. A few of the trophies require you to solve different puzzles, such as how to smash TV screens.

I have played through most of the levels again, and since it has been some time, found that I did have to “solve them” again. I have read that some of the game producers have tried to speed through the game, and even knowing all the solutions, have still taken about 4 hours to beat SP.

Even though the game isn’t necessarily short, it did definitely leave me wanting more. The good news is that “more” is on the way. The first Portal 2 DLC has been announced, and â€œwill offer new test chambers for players, leader boards, challenge mode for single and multiplayer modes, and more.â€ The DLC is set for a summer release, and will be available FREE of charge. Leader boards, keeping track of times for completing a level will be nice, and also increase the games re-playability, as you try to beat the best times.

The only negative thing I can really say about Portal 2, is that the loading times between test chambers seemed brutally long at times. The one thing besides more levels and leader boards, that I’d love to see for Portal 2, would be a level creator. That would definitely open the game up to endless hours of puzzle solving.

Overall, the game was a great mix of humorous storytelling, puzzle/problem solving, and a great time spent with a friend, or in my case, my son. I rarely recommend any game to everyone, but with Portal 2 I will. I feel Portal 2 has something everyone would enjoy. If you haven’t picked it up yet, I suggest you do. It is definitely a contender for game of the year in my opinion. I’m eagerly awaiting the DLC.

This review is based on a retail copy of the PS3 version of Portal 2 provided by Valve.

PlayStation Vita Gets a Release Date?!