I really like it when publishers are kind enough to sum up their game so everyone can know what they’re getting into:

There are 8 challenging, dynamic and hazardous environments to tackle and inside every enemy base or forests and mountains, you have to choose your battle tactics carefully to survive!
Over the 30 dangerous enemies types on your heroic way, including various tanks, heavy war machines and helicopters, robots and biomechanical creatures, pillboxes and SSM missile sites and every level ends with its own, unique boss to defeat.

Crash, kill and destroy them all to move forward! By using special power-ups, you can upgrade your tank abilities: cannon, machine gun, and armor to help you progress.

Some levels transform you to tiny bot to stealth pass near the enemies and deactivate energy fields or to giant walking robot, which demolish everything on his way to the alien’s hive!

Liked the video? Ok, now let’s find out how to engage in this action packed roll around the dirt stained warzone.

Since this is a minis, dual analog controls are out and we must use the following setup:

Move with D-Pad, rotate turrets with right side buttons, autoaim by hitting the analog stick, fire with R and, finally, switch weapons with L.

Controls take about 5 minutes to sink in since this is one of those games where dual analog control WOULD have been welcome… but that has more to do with the hardware itself and how it doesn’t have said control input available.

As soon as you’re dropped into the action you’ll notice an ammo counter on the upper left part of the screen for your two available weapons and this in turns helps you KNOW you must always be on the lookout for ammo pickups and not go around firing like crazy all over the place just for kicks (well, at least that’s true when playing on the higher difficulties, especially if you’re going for a single life speed run).

But wait, what is that next to your ammo counters? Why, it’s a Health bar! Get hit X amount of times (X = Health Bar minus Health Square Lost divided by being too slow to dodge) and you’ll be vanished from this earthly plane and must pass the rest of eternity surrounded by the dark flames of… what? Wrong game? Oh, my bad! You just continue right were you got destroyed if you have extra lives to spare on you. 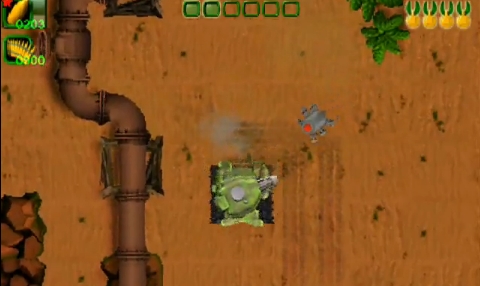 To make things interesting, you can actually power up your weapons, health bar, total amount of lives left, current health level or tank speed thanks to pickups that become available as you go along each level or that are placed when they pop out after shooting down and enemy. Died? Then you just lost all your power ups! Since the game isn’t a “one shot and your dead” type of game you can plan accordingly and be more cautious when low on health as loosing all your power ups would certainly put you at a disadvantage.

Don’t know about you, but the game reminds me of the Contra/Ikari Warriors franchises which, as a child of the 80’s and beyond, is always great news. Once you find your second Cannon power up things get even more fun and the “run, blast and crush” feeling from back in the day comes to life in many, many colors and shades of said colors that are colorful… color! Be careful as trees (color coded green!) and other elements can provide cover for your enemies and you won’t be able to spot them until it’s too late, just like in the old days!

As it has been said, you only have two weapons available:

* Cannon: Stong but a bit slow and it has low ammo. What can it take out? EVERYTHING!

* Machine Gun: Lots of ammo, very fast but does about 1/10th of the damage the cannon just got us used to. It’s better for smaller, weaker or faster moving enemies or to take down missiles that are making their way towards you.

You don’t just run into the usual enemies here and there and call it a day as some of them pop out of the ground below you, and try to be as sneaky as possible about it, with the only goal of exploding once they’re touching your beautiful “jungle green” tank finish and take down your health along with them. What is very fun is spoting one of them damn spiders and racing backwards while your frantic self tries to shoot it as it zig-zags and wobbles on it’s way to your awesome killing machine. 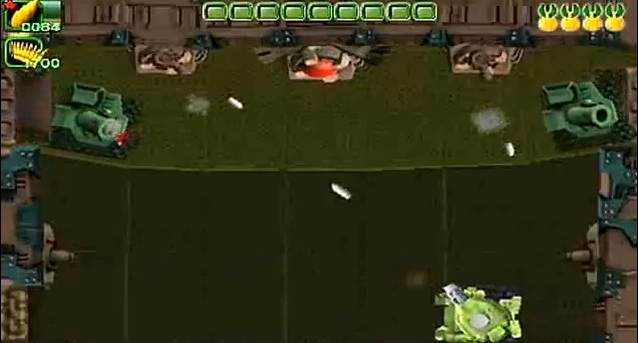 Another great thing is how there’s actual Boss battles sprinkled around the game that test you every now and then. Bosses are usually big, wide and powerful… but they also tend to not only get weirder but crazier as you progress on and on. What is the easiest way to defeat them? Lots of power ups, lots of extra lives, slurpee, practice, perfection, non-aspirin and a will of steel. Stay alert!

There’s three difficulty settings to choose from with Easy being very, very easy, normal taking things closer to the extreme and hard running the difficulty dial off a cliff, past the extreme and onto the masochistic realm of NES games… and we like it like that!

Level 4 introduces another element to the mix: park your tank and take control of one of those annoying, burrowing spider mines! Use your new found “friend” to take out barrier generators so your tank can continue to make some progress and help enemies go BOOM! 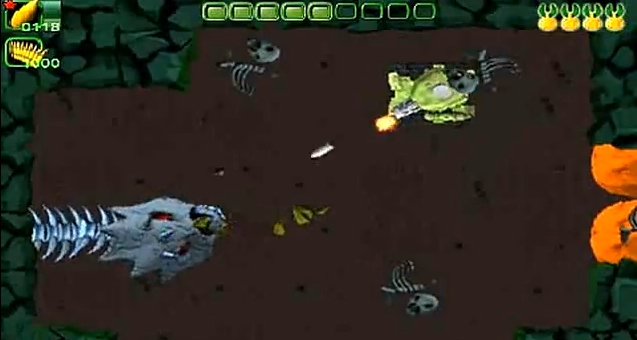 Eventually actual mines start popping up everywhere which forces you to take things slowly and watch were you step… or force you to just go forward like crazy and hope you have enough health left as to not go BOOM yourself.

NormalTanks is a fun, old school, fairly priced, addictive and fast paced game you should add to your collection if you own a PS3 or a PSP. I’ll leave you with this final comment: That Contra vibe I talked about earlier? Tooooootally off the charts once you get to level 8. I smiled oh so much once I got to that final point that it made my day.

Available on PSN (for PSP or PS3)

– Game was completed before writing this review.
– Total amount of time played: 3 hours.
– This review is based on a retail copy of the PSP version of NormalTanks provided by Beatshapers.

We also have a US PSN Code to giveaway to a lucky member from PS3Blog.net. Just a FYI you can play the game on a PS3 or PSP. It will be simple to enter this giveaway. You have until midnight on June 29th to enter. Winner will be picked at random on June 30th. Details below: