Alice: Madness Returns is a 3rd person hack and slash with a good amount of solid platforming. The early levels introduce you to what appears to be a simplistic battle system. That changes rather quickly with the introduction of shrink and dodge playing a large role in combat. Combine that with the other weapon types and you have a solid fighting system for what is otherwise going to be viewed as a platformer. 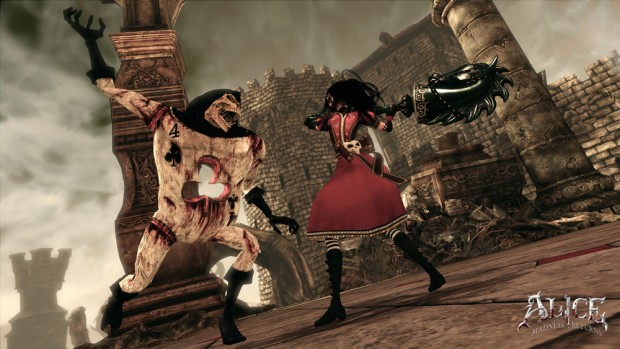 The first weapon you encounter is the Volpar blade. The beloved butcher knife from part one is your basic run-of-the-mill, fast-acting weapon that will send heads rolling. The earlier enemies drop quite quickly with a minor upgrade to this bad boy. Alice has a landmine of sorts in the way of the rabbit. She can drop the rabbit and it will slowly count down or can be detonated. This is a multifunction device as it is used to hold down switches and divert monsters from Alice during big battles.

The first quest of sorts you encounter will introduce you to the pepper gun. The pepper gun is a Gatling gun that will be used to break parts of enemies, shoot switches, and take down airborne enemies. This was my favorite for the earlier parts of the games as the lock-on system is solid and allows for constant fire while circling.

The combat becomes difficult with enemies beginning to block more and using shields of sorts to complicate matters. Just when I was beginning to feel the strain, along came the Horse Head. The horse head mounted on a stick is swung with such force that it breaks the enemies’ guard long enough for you to switch to your blade as a finisher, or the pepper gun to give yourself some breathing room. The many upgrades available change the weapons’ looks, and a fully upgraded Hobby Horse is very intimidating, breathing steam from its nostrils.

The last weapon you acquire is the Teapot, which is a bazooka of sorts. This thing is a beast and will drop monsters in one charged shot early on. The Teapot takes skill to use, as most enemies dodge its slow, arched projectile. The Teapot is also used to destroy weak walls, revealing hidden paths in the later levels. 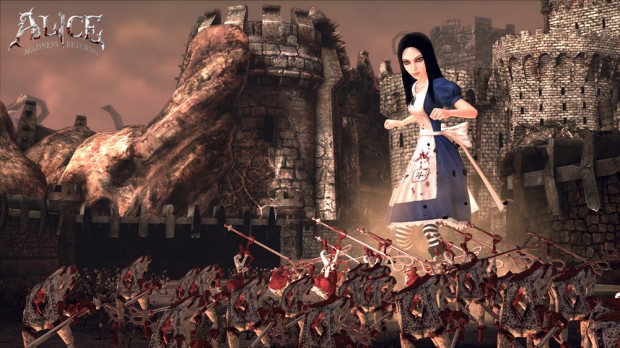 When Alice runs low on health, you can send her into Hysteria mode. The screen turns black and white and Alice lets out a horrifying scream, allowing you to become invulnerable for a short period of time and hopefully drop enough enemies to acquire some red rose pedals to refill your health. The effect is amazing and the amount of detail is gorgeous.

Madness Returns is one of the better looking titles out there. The amount of detail in every level is simply astonishing. This game features some of the most amazing level design I have witnessed in a game. The Mad Hatter’s level is full of gears and mechanical objects all around, and the amount of depth is incredible. You will have no problem believing you have fallen into the Mad mind of Alice as she searches for answers to how the fire started that killed her family. Level variation is also in abundance here. From the Hatter’s mechanical world to an under-the-sea Walrus level, you will have many sites to see. The Queen’s level was my favorite by far, with playing cards magically appearing as you walk miles above the ground.

I mentioned earlier that Alice was a platformer at heart, and although this is true, there were a large amount of surprises to be found with my time spent in wonderland. A 2D, side scrolling space shooter in the form of a sea boat under water, a guitar hero sequence here and there, and a few other surprises I really don’t want to spoil for you. The Huge Alice sequence was easily the best of the bunch. Running from the executioner throughout the entire level, only to eat some cake and crush him with my shoe was beyond satisfying. Alice then goes on a Godzilla-type rampage, crushing hundreds of Card soldiers, while making her way to destroy the Queen’s heart. 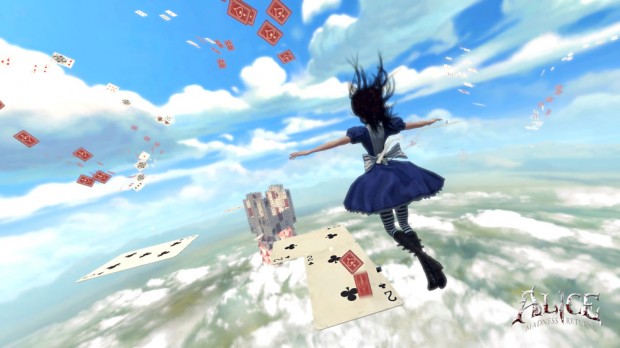 The music in Alice, along with the voice acting, easily pulls you in. Everything is top notch. I love playing a game where you can clearly see how much love went into it. From Alice’s many, many outfits, to the little gems found in the mini games, it clearly was a labor of love. The inclusion of the first Alice game in HD only shows this further. I purposely am leaving information on the story out, as everything about it is a huge spoiler. What was mentioned is hopefully enough to have you intrigued on what is a top notch game.

This review is based on a retail copy of the PS3 version of Alice: Madness Returns provided by Spicy Horse.