Earth Defense Force is a series that has been around for quite some time now. The earlier releases can be found in Europe on the PS2, followed by the Xbox 360 and, recently, the PSP. The series has never taken itself too seriously and to be honest, that is what makes the game so great. From hilarious commentary by your pilot to the outrageous jokes the commander gives for Intel while on the field via communications, the jokes never stop. If you’re looking for a lighthearted game with an insane amount of co-op and Multilayer, look no further than Earth Defense Force Insect Armageddon. 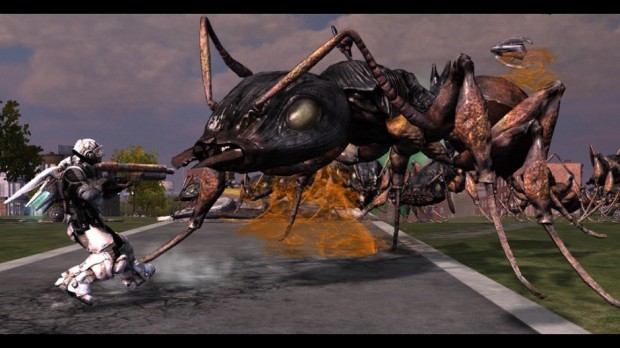 The Armors:
You can choose from different Armor types, each with their own preferred weapon load-outs. The Jet Armor has a jet pack on the back and prefers Laser related weapons over the traditional bullet weapons. The ability to fly is a welcome advantage when the screen is literally filled with enemies. The Jet armor does have its drawbacks as it is the weakest of the set. A level 8 Jet armor is solid, but lacks the extra protection needed on the hardest setting.

The trooper is your run-of-the-mill soldier armor. He has the advantage of mixing almost all weapon types and has a decent amount of protection early on. The trooper has a wide arsenal of Sniper rifles, which are lacking in the other classes. This is a good Armor for those new to the series.

The tactician is my favorite class of them all, as he is able to deploy turrets, which is a blessing during an ant hole invasion. Nothing is better than dropping an automated turret down and surrounding it with mines while your team tries to destroy the objective. The armor is quite beefy, and once leveled is a force to be reckoned with.

The last Armor is a walking tank if you will. The battle armor is made for pure destruction. The ability to have an electric shield out while shooting is a life saver. The Armor is slower, but who is going to run when you have so much defense. The same power that is used for your shield can be released in a massive explosion with the simple press of a button; during this time you must wait for a quick regeneration to occur to use your shield again. 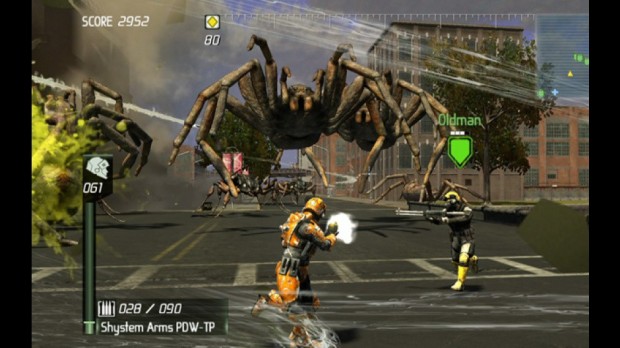 Weapons and experience:
The 300+ weapons are just as over the top as the commentary and story. You have an epic assortment of rocket launchers and heat seeking grenade launchers at your disposal. Shooting a grenade in the air and having it split into multiple heat seeking grenades is just a blast, literally. When you get 6 players in survival mode and everybody is shooting a multi-shot off, it gets rather insane. Buildings crumble completely with a single grenade shot, adding to the over the top game play. While all of this is going on, you have an active reload system, similar to Gears of War. You have to time your weapon reload with a small bar and hit reload a second time when it is lined up. This is easy at first but when you have a devastating weapon that shoots multiple rockets, the mark is hair thin.

Weapons are purchased, but they first must be found. Typically, a large robot or insect will drop a box which can be viewed after the chapter. The players I met online seem to know exactly when these drop and scatter like roaches to collect them. Luckily, the loot is picked up for all to enjoy, so if you don’t pick it up but another player does, it’s still in the rewards for your armor.

You gain experience for your equipped armor, allowing you to use higher tiered weapons, as well as modify your armor for greater health and more slots for class-specific items. Playing on normal has a level cap of 5, where hard is 7 and Inferno is 8. The greater weapons will be found on the highest difficulty and, typically, in remix mode. 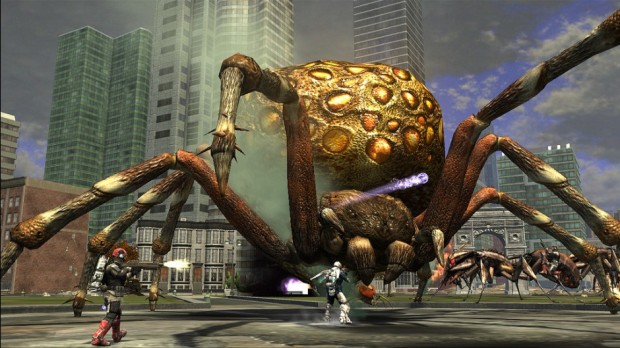 Modes:
The main portion of the game is co-op with 3 players. Once completed, you will unlock the option to play Remix mode, which changes the enemy types drastically for a fresh take on the game. You are allowed to choose any difficulty from the start, but believe me, you will want to start on normal and hit your armor max before trying a harder difficulty.

Survival mode is just that. Six players try to last as long as possible against endless waves of increasingly harder enemy types. With some enemies being bigger than a New York sky rise, it gets rather epic quickly. Tanks and stationary turrets, which are found in the main story, play a big role here. I found it easier to yell at everybody to not use anything until later waves in order to have something to fall back to, and the strategy works. You will need to survive hundreds of waves if you want to platinum this bad boy. Luckily, the waves are added and do not need to be done in one sitting.

Here’s a game play video for you:

Overall:
This is the most fun I have had in a long time with multiplayer. The graphics for the armors are top notch, and the rest is what you would expect from a budget title. Typically, by the time you’re done with a chapter, there’s not one building left in sight. The AI is there constantly shouting out hilarious one liners and the EDF command is constantly making jokes while giving you orders. You cannot find a better package for $39.99. Expect to spend hundreds of hrs to fully level up each armor.

This review is based on a retail copy of the PS3 version of Earth Defense Force: Insect Armageddon provided by Vicious Cycle Software. 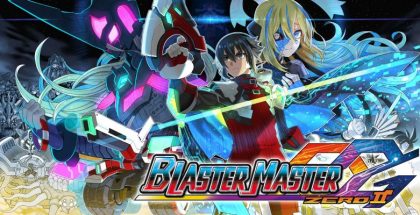