Warner Bros. Interactive Entertainment and Snowblind Studios have announced the details of the North American Collectorâ€™s Edition and pre-order incentive programs (and there’s a LOT of them) for *The Lord of the Rings: War in the North* videogame set for release this Fall. PR info must be set in stone to start our adventure:

The Lord of the Rings: War in the North* is an intense Action RPG video game based on the renowned works of J.R.R. Tolkien. Through innovative online, interdependent co-op play for up to three players who form their own Fellowship, the game breaks new ground as the first The Lord of the Rings video game to embrace the gritty and brutal reality of J.R.R. Tolkienâ€™s Middle-earth. Exploring previously unseen lands, storylines and characters as well as those familiar from past feature films, gamers experience expansive co-op gameplay and upgradeable weapons, character customization and development, skills and special abilities. Gamers must play together or perish as they work to defeat Sauronâ€™s forces in the North

Now, let’s have a look at what the CE will look like for the PS3 AND what is included with your $129.99 purchase: 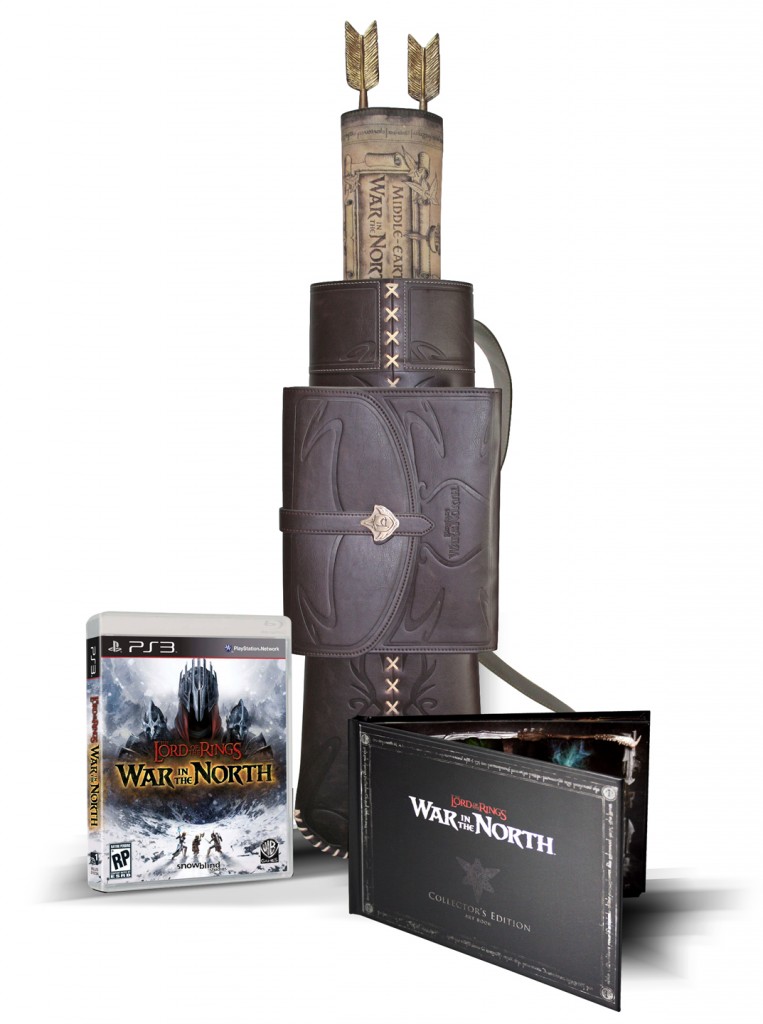 The Collector’s Edition will include:

* The War in the North game
* Ranger of the North quiver case
* War in the North Art Book
* Inside Look: The Music of War in the North mini-documentary. Includes interviews and footage of composer Inon Zur at Abbey Road Studios and the E3 2011 concert event. Also includes three tracks from the game as a bonus.
* Digital content: War in the North wallpaper, fonts, icons, and more (PS3 version)

How many different pre-order bonuses are there? This many!

* GameStop: Visit the Citadel of the Stars and the Tower of Stone with the Human Theme Pack equipped with an exclusive human sword, armor and battle attire of the Human Ranger, and get access to the Osgiliath Challenge map.
* Amazon.com: Get early access to part two of the War in the North Digital Comic written by Brian Wood, illustrated by Simon Coleby, and produced by DC Entertainment. The comic book reveals the back story leading up to The Lord of the Rings: War in the North. Players will also receive the Orc Champion sword for in-game use.
* Best Buy: Embark on an Elven adventure with the Elf Theme Pack, equipped with a mystical Elven sword, armor and helmet, and get access to the LothlÃ³rien Challenge map.
* Target: Immerse yourself in the sounds of Middle-earth with three exclusive tracks from the War in the North soundtrack.
* Toys â€˜Râ€™ Us: Receive a limited edition, signed War in the North poster by Jim Lee, and access to download parts one and two of the War in the North Digital Comic at launch.
* Wal-Mart: A Dwarven quest lies ahead for everyone who chooses to pre-order at Wal-Mart; the Dwarf Theme Pack includes an exclusive dwarf sword, armor, and helmet.

The artbook could be interesting and the soundtrack documentary is something else I would look forward to. The quiver could go either way but it IS something I would set up and display along all the other CE… collectibles I’ve bought over the years.

Will you be setting aside $129.99+Tax for this version of War in the Nort?