Metropolis, capital of crime. Private Detective Red Johnson is stretched to his limits after shots were heard from Drownedman’s Bridge. Explore strange worlds, find and use clues that will lead you to the truth in this unique game with stunning backdrops. Question suspects, push them over the edge and confront them in breathtaking action scenes. But don’t forget you also have a brain. In this 8 to 10 hours long adventure/investigation, you’ll discover a world in which everything is dark, sharp and deadly. Even humor.

From the studio that brought you The PooYoos, a fun game series for children 3 to 5 (“Because your 3 to 5 year-olds also deserve to play quality games”) we now get… a noir adventure game. Diversity is the name of the game, and a game that is diverse is what Lexis NumÃ©rique will provide to us. Love how this next quote from the sums up who they’re aiming at with Red Johnson Chronicles:

If youâ€™re only into first person shooters, Red Johnsonâ€™s Chronicles is not for you.

Most of the time, point and click games have a set path to follow and puzzles can only be completed with the same solution every time which could put off many gamers… but the same can be said about any game (you only shoot and take cover; you only punch and kick walking from left to right; you only jump and run until you reach your goal, etc.) so let’s keep that in perspective before diving into this game.

Want more of a background on the game and on Lexis NumÃ©rique? Here’s a Q&A session with the developer, brought to you by the PS Blog.

You play as Red Johnson, Private Investigator (as in P and I put together). You investigate privately to uncover the truth below the dirt you got on someone you once knew from before the time when… ah, a cop just showed up at the office! Seems to be that the police are swamped with work to be able to do a proper job on a new murder case that just got dropped onto them, and now Red Johnson must take a payment from the taxpayer’s money to get to the bottom of this and uncover the ending to what is always a fun premise to a game: a who dunnit scenario!

This is one of those games we like to call “A Point… And A Click”. You move a magnifying glass around the screen looking for objects or people to interact with, point at them… and then click with the X button to investigate further. If it’s an object, you’ll take it. If it’s a person, you won’t take them. Simple, right? When other humans are involved in the formula you’ll strike up a gentle and kind conversation to try and get insight into what has happened that led to someone being murdered at the bridge. Conversations take place on a separate screen with a special focus on the participants and a fade effect placed on the other objects around them to really drive the point home: LISTEN CAREFULLY at conversations so you can select the proper option from the dialog tree! Choosing poorly can make things end in a very bad way. 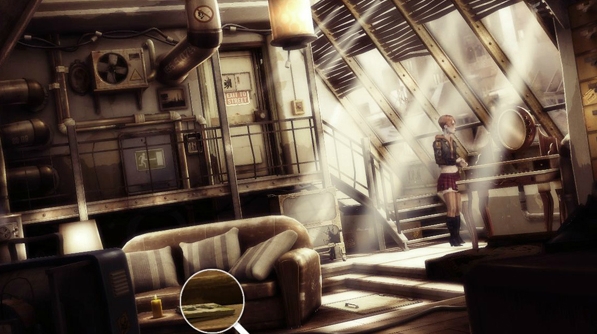 We’re in the presence of a very good looking PSN game that has a style of it’s own and likes to mix up the way the screen provides us with specific input. The game itself is colorful and alive, but cutscenes play out in black and white and this certainly gives it a different vibe that delivers on it’s “noir” premise. When you click on a stair, an alley or an out of the way path and the view switches around to show you a different take on the scenery or to end up changing to another place.

The voice acting is something else I also liked as each character has a distinctive voice which helps keep things interesting. Some people have expressed how the voices can be a bit over the top or “stereotypical” but in a game like this there’s only so much room for trying to come up with the perfect mix of style, substance and uniqueness… and balance everything accordingly.

When closely inspecting objects, left analog stick moves the cursor and the right analog stick allows you to move the object to look for clues and information on how to solve all your problems (presented in this first episode. Won’t solve all your real life problems. Please use responsively under the supervision of a Beanie cap wearing PI).

This “left stick-right stick” control method is available when solving puzzles as you can tell from the first puzzle you run into which requires you to set the proper combination to open a padlock (no, open sesame doesn’t count) and you use the left analog to move between each set of numbers while the right analog lets you choose the number itself. You can even shake the Dualshock 3 (remember this one started as the Sixaxis?) to help you solve a puzzle or two. All these options make the game feel more dynamic. 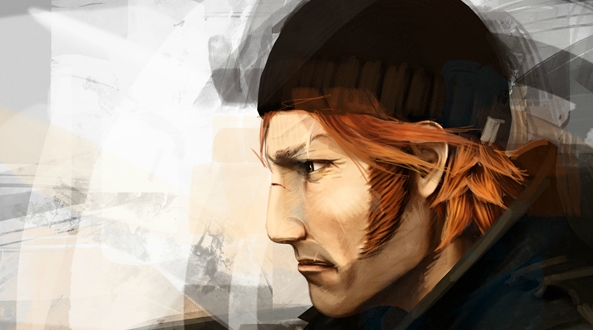 There’s another element in the game that helps us make a better use of all the evidence we’ve located: the migthy analyzer! Back at your HQ office you can use this marvelous piece of equipment to… do an analysis of the objects you’ve found. You never know when a clue will be available in that discarded can of soda! You can also compare two objects to see if there’s a match between, say, a discarded bullet casing and a gun you found so you can consider if it’s part of the investigation or not.

And then, you run into your first Quick time Events (QTE). What are those, you ask? Here you go:

Quick Time Events (QTE) : They’re quick, they’re timed and they’re eventful. Shenmue showed them to us, God of War made them it’s own and Red Johnson takes them out for a spin again. When you meet each of the major characters a QTE will start and you must get it completely right to progress (making no mistakes gets you a trophy but making a mistake on every single part of each QTE also gets you one… you know what that means? Play the game twice for both trophies!). If you miss any segment you have to start all over but since they’re quick (hence the QTE name) it’s not like you’ll loose too much time learning the sequence.

You’re graded depending on how you do on QTEs, conversations and puzzle solving. Less mistakes or being faster gets you a better grade, a better grade gets you more money. Get mo money, get mo problems. Get a final A grade once you finish? Trophy unlocked! You can save anytime which is great in case you have to stop playing for any reason. It also helps greatly when solving puzzles since you can save before starting one and reload if you get a very bad grade (wink wink, nudge nudge).

It’s very difficult to keep track of everything and remember every single detail about a conversation you might have had during the first hour of the game when you’re on hour 5 already which is why you’re provided with a notebook ton help you sort things out. The notebook contains lots of information (more of which is constantly added and you can tell that thanks to a file folder icon that pops up on screen) and you can access it with the Select Button to see where you’re coming from, what you’ve learned so far on the case and what needs to be done to move on ahead. Here’s a brief description of each of the sections available once you open up the notebook:

Objectives: A list of all the things that you have to do in order to solve the case

Notes: General information about pretty much everything that relates to the case at hand.

People: Details and description of the people you’ve met and that play a part on how this story develops.

Clues: Shows all the puzzles you’ve unlocked and solved and also gives you the chance to, should you ever be stuck on an objective, purchase hints in exchange for your hard earned money… and doing so won’t block you out of any of the trophies!

Map: Allows you to move between the different areas available in the game.

Progress: Handy list that shows you how much you’ve done and how much is still left to do. Great for us trophy hunters since we can tell how many puzzles or conversations we’re missing. 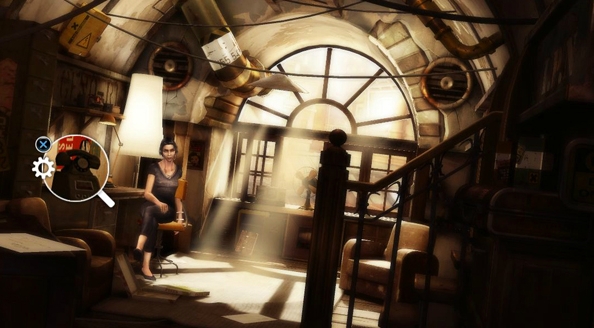 I’m soooo glad that adventure games have been on such a huge comeback in the last couple of years and Red Johnson Chronicles: Episode 1 (how soon until Episode 2?) does the genre good. 7 to 10 hours of total depending on how good you are at point and click games, great voice acting, a very nice looking environment, a colorful cast of characters and lots and lots of puzzles make this a great game to add to your collection.

Right now you could win one of three copies of Red Johnson’s Chronicles: Episode 1 we have set up for a giveaway… but act NOW since it won’t be on forever!

– Game was completed (TWICE) before writing this review .
– Total amount of time played: 10 hours.
– This review is based on a retail copy of the PS3 version of Red Johnson’s Chronicles: Episode 1 provided by Lexis Numerique .

RAGE Behind the Scenes 2 of 6: The Dawn