Remembering War of the Monsters 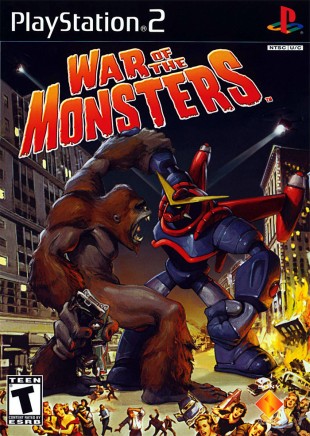 Back in the heyday of PlayStation 2, when it really started picking up steam, Incognito Entertainment, the development team behind titles like Twisted Metal: Black, and, more recently, Calling All Cars! and Warhawk, released a relatively simple, but wholly addictive, destruction and fighting game by the name of War of the Monsters in 2003.

It didn’t have much in terms of story. The basic premise is that aliens invaded Earth, and after the nations of the world developed weapons to take them out, the fuel from the saucers that leaked out after they wrecked have had adverse affects on different creatures/creations/objects, including an explosion caused by a saucer crashing into a power station/transformer, turning an electrician into a cyclops made of electricity, or a scientist who feeds the fuel to a praying mantis that transformed it into a giant. It’s all very 1940s/50s Movie Monster-like, and each map had a certain theme to it.

There were simple origin videos after you beat the game with a certain character, but no character development beyond that. Each level, as you advanced through the game, did have level-based introductions for the different monsters you fight (as well as “movie posters” based on the monster(s) you fight next for loading screens), which was nice. There were a few fun boss battles thrown in here and there, too (including an actual nuclear “plant”). What it lacked in story (and overall depth), though, it more than made up for in fun.

In all, there weren’t too many fighters to choose from, but that was OK. The game was so fun, it didn’t matter. The destructible environments, and the different fighting strategies each monster had (including special attacks), is really what made the game. Even the controls were simple and anyone could pick up and play. This was the only game my cousins borrowed from me over and over again (they often borrowed games from me, but usually only once).

When I talk about the destructible environments, I really mean they’re destructible. It’s like Rampage on steroids. Of course, the maps don’t go on forever, as there is a force field of sorts that blocks the monsters from entering beyond the maps’ borders, but whatever is within those confines is fair game, including the people and various vehicles littered throughout the environment (so, like Blue Oyster Cult’s ‘Godzilla’ says, you can literally pick up a bus and throw it back down as you wade through the buildings toward the center of town). And yes, what I mean by that is that you can use the cars/buses/what have you as projectile weapons.

There were also some moves that allowed you to throw your opponents into buildings, and if that building had gotten enough damage, it will collapse (you can also get to the roof tops by flying and/or climbing and fight up there, too). Upon the collapse of a building, pieces of said building can also be used as projectile weapons or melee weapons.

Some of the most fun I had was with my brother (this game is perfect fun for multiplayer; what was really cool was how the camera did splitscreen when you were away from each other, but put it on a single screen when you were nearby). We would destroy the entire city and then go on opposing sides of the map and just throw stuff at each other. Grabbing antennas (and other sharp, pointy objects) was the best, though. They impale you and your opponents. This stuns whoever it comes in contact with, and requires the player to button mash to remove it.

Some environments even had level-based special attacks. Tsunopolis, for example, had a UFO hovering off over the water, and if you hit it or throw something at it, it would raise up and fire a beam into the water, creating a monster tsunami that would knock your opponents down and destroy any part of the city the water comes in contact with. Of course, if you aren’t high enough in elevation yourself, you will endure damage as well.

All of this is what made the game so much fun. The multiplayer aspect, the simplicity, and the depth of destruction you can deal out to an environment all contributed to that. Most people seem to have become aware of the title back when it came out because it was packaged in a demo disc for magazines and the like. Other than that, I never did see any advertising or anyone making a big deal out of it, and thus, it seemed to have faded away.

That is unfortunate, as, to this day, it is still one of the most fun titles available. Personally, I think it is very well deserving of a sequel. Too bad Incognito has since disbanded and, really, split off into two separate companies, Eat, Sleep, Play and LightBox Interactive. From what I can gather, most of the War of the Monsters team had joined up with LightBox, who is currently developing Starhawk. Apparently, even Dylan Jobe is interested in expanding War of the Monsters. I guess it’s up to us as gamers to express our interests as well, and maybe then, we might see a future version of the title. I truly hope they’re listening, and other gamers express their interest as well.

The real question is, though, would be worth a retail release like the first title was (simply because it didn’t have a choice)? Probably not. I think this format of a game would definitely be better suited for a high-end PSN release. My only hope is that we at least see a PSN version of the first title, with PSN support for the 4 player multiplayer. This title just screams for that kind of support and I think LightBox would have another winner on hand if they went this route, even if the game is over 8 years old (just freshen up the textures and models; maybe do some modern lighting effects). Of course, I’d still rather have a sequel with more monsters to choose from and more locations to fight, and if the formula for the game doesn’t change, the PlayStation Network will gain one of the best titles available on that platform.