Wait, another puzzle game? Seriously? It’s not that I hate puzzle games as I actually love them but ANOTHER one is not what the doctor ordered for my entertai… oh, wait, Chiptune music as the foundation (+MIDI extra bells and whistling whistles that whistle) to a great soundtrack for the game ( where can we get it? Ah, thanks! Be sure to pay at least $5 (or MORE)for this great soundtrack!), which adds a great atmosphere all around? Old school polished pixels (remember 3D Dot Game Heroes?) that change into very good looking HD textures when approached? Challenging but fun levels that actually make you think in order to solve them? Hey everyone, a new puzzle game got released on PSN and it’s awesome!

In Puzzle Dimension you’re in control of a small spherical whatchamacallit that moves around each level trying to find the solution to all of mankinds problems, the meaning of life or flowers, whichever is closer to it. Since flowers are available on each level, then collecting flowers is what your final goal should be! Once you collect all the flowers in a level you’ll be able to open up the portal that takes you to the next one in this 100 level puzzle game.

Tutorial will help you understand how the game works. This iso ne of the few games where actually completing the tutorial is a must as every new element is presented to you one step at a time so you can start your flower hunting session with all that new (and needed) knowledge .

Before going on I have to say something that is VERY important to all puzzle gamers out there: There is NO time limit set in place as a deadline for completing a level (thaaaaaaaaaaank yoooouuuu Doctor Entertainment!) so you’re free to reaaaaally think for a while on what the proper course of action should in order for you to make it to the exit in one piece.

Game looks great, music is all kinds of awesome… but, how does it control?

* You move around with the left analog stick (as is usually the case in 99.9% of all PS3 games) and can also jump in any direction (as long as it’s up, down, left or right) by holding the X button and moving the left analog stick in the direction you want to jump. You only skip over one block and land on the one right after it so take that into consideration. 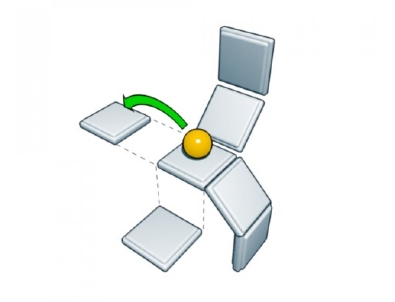 * Right analog stick is used to move the camera around for a better view of the level (rotated by 90Â° each time) and after the camera moves you should stop as you risk moving in the wrong direction from the change in perspective.

* The Triangle button makes you enter camera mode which allows you to move the camera around the whole level to get an idea of what you’re up against and how to approach it.

* L2 and R2 help you look above and below you, respectively. 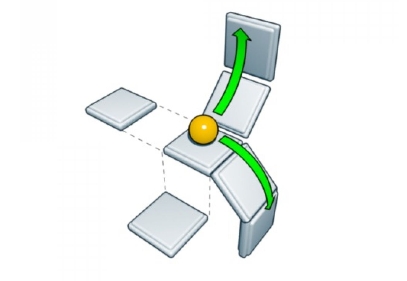 Move up a small incline? The whole level rotates with you as well. 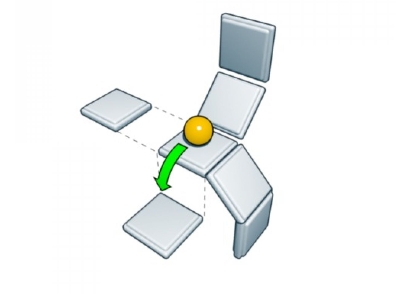 If you’re on a platform and move towards another one that is just below and over the edge.. you will FALL on top! What happens if there isn’t another platform? Bye bye!

There are four “themes” to choose from in the game that change the background for the levels and the style used for all block types. Collecting more flowers unlocks new themes for you to use as only one is available from the start. You should definitely change the theme once you unlock a new one as it does make a difference 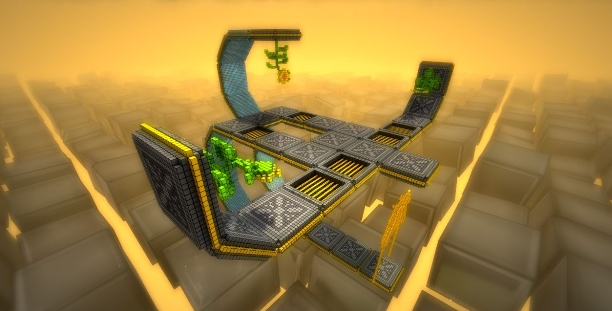 The more of the level that you “unpixelate” the more points you get. Do that fast and you’ll rack up a multiplier (which goes down slowly if you’re not doing this quick enough) that will allow you to increase your total score. Unpixelate ALL blocks in the level and you’ll get a bonus! Also, Unpixelating all of the blocks in all of the levels will give you a trophy. A GOLD trophy! When you’ve unpixelated all blocks in a level it will have a green circle in the center. If not, the circle will be white.

What are the block types available? Here’s a list for easy reference:

Regular Blocks: Name says it all. They have no added effects on your trajectory and are the ones that populate most of the levels.

Cracked Blocks: Can only be passed over once. They’re usually an important part of a puzzle and need to be used properly to complete it but in most of them they exist for the sole purpose of allowing you to get used to them for the advanced levels. Do remember that Cracked Blocks also give you points which is especially important for the “Replay”trophy.

Ice Blocks: When you travel over them you’ll continue to move in the same direction and won’t stop until you hit a non-ice one. Great help for when you’ve found the solution and want to do a quick replay as they help keep you moving non-stop.

Sand Blocks: These you’ll hate in the last two clusters. When you move over a Sand Block you’ll stop on a dime and won’t be able to move out of it unless you jump (golf, huh?). Easy at first but they WILL make you have to restart several puzzles because you didn’t plan accordingly.

Springs Blocks: Bounce away! You’ll jump over two blocks and land on the third one with the help of this block. Be careful as you’ll jump in the same direction that you were moving before hitting them and with a limited playing field that could mean you’ll land in nothing at all.

Swith Blocks: They make blocks appear in pre-designated spaces (you can identify them since you’ll se a white outline were one could be placed) or switch on/off the Spike Blocks that threaten your existence. Speaking of which…

Spike Blocks: Touch them and you’re dead. It’s that simple. They can be deactivated by touching a Swith Block but they could instead be activated at another spot so look before you move, bounce, jump, fall or leap in any direction.

BBQ Blocks: Even MORE annoying than Sand Blocks! At first you think it’s just a harmless grill-equiped Block so you politely make your way across it… and then the flames are ignited! Touching it again will destroy you so you must be extra careful as they’re placed near switches, springs or chasms you must cross to complete a level and it’s a one way street that ruins your perfect runs in a hearth beat.

Stereoscopic 3D is available for this game and while I didn’t have a chance to try it I can easily imagine how it would definitely be of great help in judging distances, jumps and spotting all the different block types from far away. 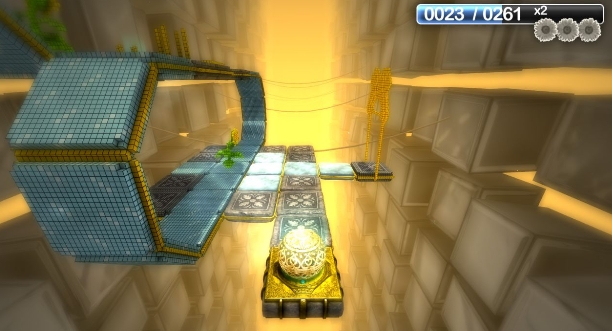 You pick a cluster (more are opened as you collect more and more flowers) and then one of the ten puzzles available on each one. All puzzles inside the cluster start out as a small variation on the first puzzle and it’s main element (hinted at in the name of the cluster) but constantly grow until you’re dealing with a huge puzzle on top, ANOTHER one on the bottom of the board AND one or two more sections to the side which forces you to calculate how gravity can be your friend when treated right.

Cluster Eight is called Revisited… which makes sense since it does it’s name justice. You’ll be tasked with solving ten puzzles based on others from the first seven clusters but with new block types placed all around which changes your approach and really helps understand how much you’ve learned so far. 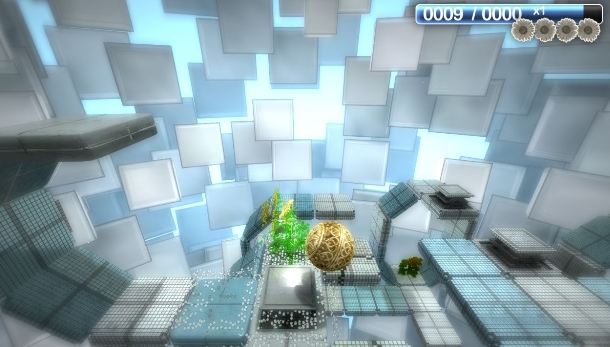 Puzzle games on the PSN Store are a dime a dozen nowadays so when a new one is made available on the service it BETTER not be of the “match 3” or “make a square with the blocks before the beat is dropped!” variety. Puzzle Dimension does things differently and, while it IS a puzzle game, brings new elements to the table that make it a worthwhile purchase for your collection.

Before you go, here’s a special extra for all fellow trophy hunters out there:

– Completed all 100 levels and obtained all trophies (and oh what a fun ride it was!)
– Total amount of time played: 27 hours.
– This review is based on a retail copy of the PS3 version of Puzzle Dimension provided by Doctor Entertainment AB.