I should feel blessed to be close to such major events that happen in and around the video game industry. What most people don’t know is that the San Diego Comic-Con is a major hub for announcements and reveals. Most people think this is just a nerd convention where some overweight stereotype dresses up in a costume in the middle of the southern California summer. They are wrong my friends.

Comic-Con has something for everyone. Video Game wise, Capcom announced Ultimate Marvel Vs. Capcom 3, Naughty Dog and Sony brought the cast of Uncharted 3 to discuss the game, Batman: Arkham City was being promoted everywhere during the convention, and last but not the least, Hideo Kojima himself making his 3rd appearance to promote the upcoming HD re-release of his famous games. 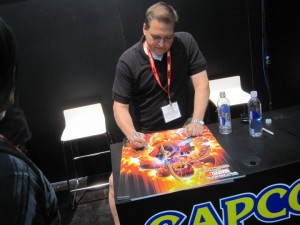 It started off innocently enough. I get a press release from Capcom with assets and videos on July 20th. I arrive at the convention that night to see that they had a couple of stations running the build with the just announced characters, Ghost Rider, Strider, Hawkeye, and that red dragon thing. All week they had tournaments running and giving away promo posters for the game.

Ryota Niitsuma the producer of MvC3 was on hand a long with Frank Tieri signing posters.

Uncharted 3
Nolan North, Emily Rose, and Richard McGonagle were on hand to discuss Uncharted 3. These panels are usually the best places where you can talk to them face to face and ask question. Nolan North has announced that he is working on a book called Drakeâ€™s Journal, which will be kind of a behind-the-scenes look of the making of Uncharted 3. They also showed a very funny clip of them doing this motion capture and sound capture, which made everyone laugh.

The good folks at Sony also provided badge holders with these awesome one of a kind T-Shirts and voucher codes for those who were lucky enough to get them. Sony partnered with ESC toys to bring you these awesome vinyl figures. Here are a couple of the Uncharted swag I managed to get. Poster designed by Adam Hughes. If you don’t know who that is, well you better Google him because this guy is considered by many as one of the best cover artist of all time. The poster kinda reminds you of Indiana Jones. 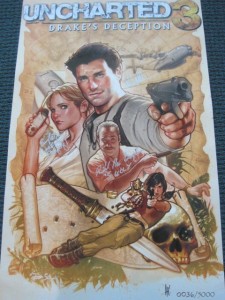 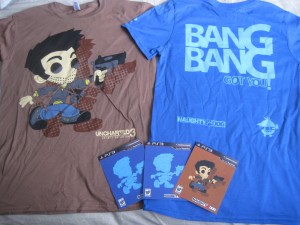 Hideo Kojima, along with Yoji Shinkawa and Yumi Kikuchi, was on hand to greet fans and sign items during the event. The Konami booth featured some items from the Konami Store in Japan and to my dismay, I missed out on these awesome coffee mugs that had the famous red exclamation point printed on the bottom of the mug. They were selling them for $15. Sold out in a matter of hours. I did, however, manage win one of the prizes they were raffling to the attendees of the signing. I’ll let the picture speak for itself. Check out Konami’s official facebook page for more information about the signing. 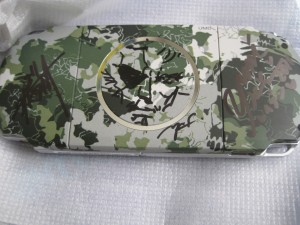 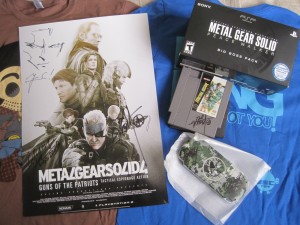 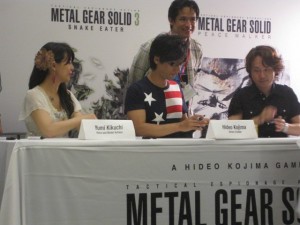 I also have a special treat to one of our readers, he asked me if I can ask Kojima about Metal Gear Solid RISING and Mr. Kojima did not disappoint. The moderator of the event asked the audience if we have any questions for Mr. Kojima and I yelled out WHEN IS METAL GEAR SOLID RISING COMING OUT!? and he answers me in this video..