This is a port from a 1994 arcade game but upgraded to HD and with extra some bells and whistles. It’s a lot of fun to have the whole game be live action. It honestly wouldn’t be as fun if it was just CGI characters. It’s cheesy but in an entertaining way. My wife and I loved to play this whenever we stopped by the arcade. Sadly one day it was gone! So we where both excited that we could play this game at home now. 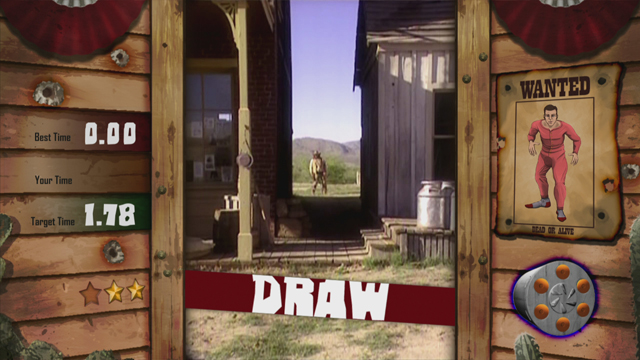 Here is how you play the game. You keep your gun “holstered” and you draw your gun when they start going for their own gun. Then you have 6 shots to kill them. If you draw to early you get a video of Wes Flowers saying “Put the gun back in the holster“. If you do this twice in a showdown you get a foul and you fail the showdown.

You will get bonus points for a headshot, which is harder than it seems. On the easier difficulty it will have text on the screen prompting you when to draw. But I played on the hardest setting because I wanted a challenge. You don’t get any signal to draw other than the sound of them drawing their gun. I always kept an eye on their hands and reacted off that instead. 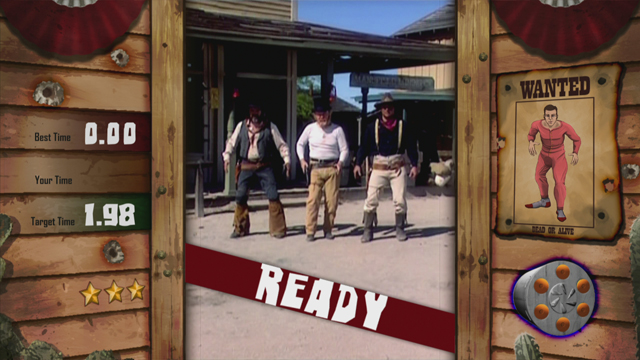 Sometimes there are 2-3 gunslingers at once & it’s random which one will shoot first so that keeps you on your toes. When it’s 2 gunslingers you have to finish them off with your 6 rounds, no reloading during a showdown. You have to win every showdown in the round before you move to the next round. So you get fail you get a rematch.

In total there are 8 rounds and each showdown is different. Here is some gameplay footage of my wife playing the 1st round. Only one that repeats sometimes is the 3 gunslingers at once which is random on who will shoot first anyway. You can choose to have 3, 5 or unlimited lives, getting threw all 8 rounds with only 3 or 5 lives would be very impressive feat.

The first 3 rounds are pretty easy and I got confident sometimes and only shot them twice and to my surprise the wounded enemy would stumble and then fire back killing me. It totally took me off guard and gave me a good chuckle. So double tapping here is effective.

On round 6 – 8 sometimes I just had to fire before they even went for their gun. Which was pretty hard to time just right. On several gun gunslingers I had to try it over and over. I would count in my head and try to time it just right and it was still hard. Sometimes I try to time it with things that happen in the environment. Because just reacting off them going for there gun is very challenging for sure. Unless you are one of the world’s fastest quick-drawers. 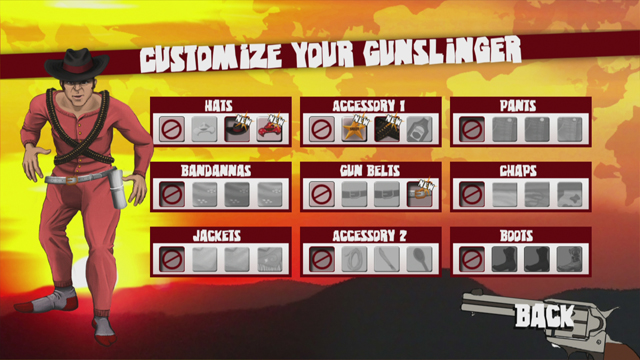 In the top right of the screen there is a gunslingers character that you can customize with items you unlock by playing the game. He doesn’t have any real purpose. I think it would have been fun if he followed the movement of the controller in a basic way. PlayStation Home items are unlocked while playing the game which is nice. You even get a arcade replica to put inside your space.

I tested how much you could get away with before it told you to “put it back in the holster”. I tried getting the cursor out of the screen and lifting the gun but not having the cursor show on the screen and it can tell the gun isn’t holstered. So it can sense if the PlayStation Move is pointing straight down or in firing position. So I slowly moved the gun until it told me to holster it. Turns out it allows you to have it holstered about 45 degrees which is how some guns are in holsters.

There is also 2 player with Fast Draw Showdown, you can play Quickdraw or Showdown. Quickdraw you take turns against the same gunslingers and whoever gets the most points wins. Then with Showdown you both play at the same time and who ever gets the kill shot wins the round. It’s pretty fun actually to play with a friend. I noticed some gunslingers that I haven’t seen during the single player mode as well.

Overall it’s a fun game and the transition from arcade to PS3 is great. It may seem really easy at first, but the later rounds start to present a real challenge. Fun to see real people responding to your gun shots. The background music on the main menu gets you in the cowboy mode for a showdown!

This review is based on a retail copy of the PS3 version of Fast Draw Showdown provided by Digital Leisure.

PS3BlogCast gets explicit in episode 12!