The PSP Remaster series will use adhoc party for its multiplayer-based PSP games. Adhoc party is available for download via the PlayStation Store and is a software that turns your PS3 into a server of sorts for connecting the PSP to users around the world.

That’s the basic rundown. Here is the kicker, and this may not sit well with many users: you must have a wired connection in order to use Adhoc Party. You can have 3 users on a PSP and the host on the PS3 in the same room with the remaster series, which is just awesome. This was confirmed by the quirky group over at Famitsu, as seen below, using none other than Monster Hunter 3rd HD ( go figure right). 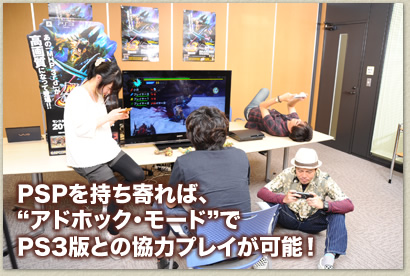 So when Peace Walker lands on the PS3 you will need to have adhoc party and be familiar with its functions in order to get some MP gaming on. Thoughts on wired connection only? Have many of you even heard of Adhoc party?