GoldenEye 007: Reloaded Gets A Release Date 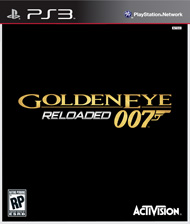 Just got my latest issue of Game Informer and other then some real nice Borderlands 2 screens and a decent Dark Souls page there was a sidebar stating that the N64 Remake of Golden Eye will be hitting the PS3 with move support September 30th.

The year just gets better and better for PS3 owners. The story mentioned 16 player online with a new challenge mode along with improved AI and visuals to boot (how improved over the Wii version? We’ll just have to wait a bit and see for ourselves).

Upgraded Multiplayer – Replay the multiplayer game that defined a generation but, now, with all new enhancements:

Choice & Customization – Customize your gameplay with more modifiers and weapon loadouts than ever before in BOTH the single AND multi-player campaigns. Play with standard controllers, Playstation Move, the Playstation Sharp Shooter, or the Top Shot Elite. You decide.

What is ‘Black Death’?

Call of Duty: Modern Warfare 3 – Facebook and ELITE Integration Behind The... November 3, 2011 | Oly