Prodagenâ€™s Flex-Fire system for the Playstation Move provides a gun-shaped bracket in which to mount the Move and Navigation controllers. Thus, the Flex-Fire is similar to Sonyâ€™s own Sharp Shooter battle rifle system, but Prodagen aims to ameliorate the Sony design in a number of ways. The most obvious difference is its aesthetics: The Flex-Fire is black and vicious, whereas the Sharp Shooter resembles yet another Nintendo Wii add-on, but one that is making a half-hearted effort to imitate a phaser rifle from Star Trek: The Next Generation (yes, from 1987). But the more important innovation of the Flex-Fire is its articulated barrel, which allows one to hold the rifle steady with one hand while turning its muzzle with another, increasing the speed with which one can adjust oneâ€™s aim. Read on to see what this means for your game.

The idea is that when one is using a typical rifle mount for the Move (such as the Sharp Shooter) in a first-person shooter, in order to aim or to turn oneâ€™s character, one must shift the entire gun assembly. The Flex-Fire makes this process more speedy by allowing one to turn just the front of the barrel, which requires the motion of one hand instead of two, and which relies on less rotational movement to achieve the same motion in game. Also, one may certainly shift the entire gun as one would naturally do with the Sharp Shooter while simultaneously shifting the articulated barrel, which speeds up the process of moving or aiming still more. I also discovered another nice advantage to this system: If one points the gun at the center of the screen and then does much of oneâ€™s aiming and turning via that one-handed barrel-flexing as described above, then one can quickly snap the cursor back â€œhomeâ€ in the center of the screen practically instantaneously (and without risking over-correction) by simply releasing pressure on the flexible barrel, so the cursor jumps back to alignment with the gunâ€™s orientation. In short, the deviceâ€™s signature flexible barrel makes for a canny system that works quite well. 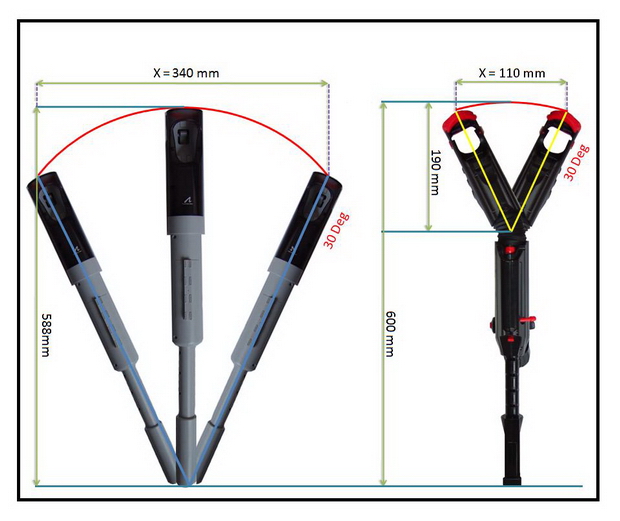 This accessory can be adjusted in a few ways as well. If you prefer to do without the barrelâ€™s articulation, you may slide a bar from behind the muzzle up into the front of the gun, where it locks in place. This functions like a deadbolt, preventing the muzzle from â€œflexing.â€ Also, the gun features an adjustable stock. At its shortest, the Flex-Fire is about 19Â½â€ long, and with the stock extended to its furthest reach, the gunâ€™s length increases to about 23Â½â€. I, for one, would have appreciated a few more inches in the stock, as even when full expanded, I am unable to position the stockâ€™s butt against my shoulder. Granted, my arms may be longer than average, but even my wife (whose arms are shorter than mine) finds it uncomfortably constricting to position the stock in the traditional manner. This may not be a huge drawback, though, as I know that many people complain that long stocks on gun accessories can sometimes impede oneâ€™s mobility or oneâ€™s ability to turn in game. (Although this is precisely the sort of problem that the flexible barrel is itself designed to address.)

Both the Move and Navigation controllers fit easily and snugly in their mounting brackets, and they are also easy to release from these housings. In fact, the Moveâ€™s fit is so secure that I could only insert the controller once Iâ€™d removed the controllerâ€™s wrist strap. Happily, it is not difficult to remove or to reattach the strap, so it does not feel too onerous to do this when readying the Flex-Fire. The Moveâ€™s glowing ball hangs out of the muzzle of the gun, while the Navigation controller is housed in the grip, near where one might expect to find a trigger. The gripâ€™s angle may be altered slightly as well.

The main drawback to the Flex-Fire, as I see it, is that it does not include a trigger, which operates the Move controllerâ€™s Move button (the typical â€œfireâ€ button). Thus, in order to shoot, one depresses the Move button with the thumb of the hand that is holding the front of the barrel. This seems like an awkward way to shoot when one has gone to the trouble of buying and preparing a device that is shaped like rifle. To confuse matters further, the L2 button on the back of the Navigation controller, which is housed in the grip, â€œfeelsâ€ exactly like a trigger in this configuration, for it rests just under your index finger. But unless your game allows you to remap your controls, inadvertently pulling this button is probably going to have some undesirable effect, and it is certainly not going to fire your gun. (When testing the device while playing Zipperâ€™s MAG, I kept making the above mistake, which would switch my weapon to my med kit. I must have looked like a total moron desperately trying to heal myself in the midst of a firefight!) Of course, one will with time become acclimated to the control scheme, but it is worth knowing that in purchasing the Flex-Fire, you are acquiring a gun that does not have a trigger and that instead preserves the somewhat unintuitive firing schema inherent to the Move itself.

The Flex-Fire is a fine system that addresses a major concern in the usefulness of rifle accessories for motion control when one is competing at the highest levels. And indeed, I can tell you with certainty that in the world of MAG, at least, most of the top-tier players have moved to the Move, forsaking the dead zones and lackluster response of twin analog sticks for the twitchy responsiveness that motion control allows (and which PC users have enjoyed thanks to the mouse for the past fifteen years or so of FPS’s). My only caveat is that the Flex-Fire is a gun system that does not entirely provide the gun experience. But Prodagen is more interested in responsiveness than verisimilitude.

The sublime art of the American infomercial.

Editorial notes: The Flex-Fire is available for pre-order at flex-fire.com. A release date has not been announced as of this articleâ€™s time of publication. The item may be purchased for $29.99 plus shipping (as of Aug. 27, 2011). An example of the Flex-Fire was provided to me for review purposes. Thank you, Prodagen!

This review is based on a PS3 retail version of the Flex-Fire provided by Prodagen.