Battlefield 3 [What We Know So Far]

Battlefield 3 is easily one of the most anticipated games this year. It is the direct sequel to the 2005 hit, Battlefield 2, and arguably the eleventh installment in the Battlefield franchise. Developed by the Swedish company Digital Illusions CE (DICE) and published by Electronic Arts, the game will run on the new Frostbyte 2 engine. Frostbyte 2 will offer more destruction, advanced sound, and incredible graphics. A new character animation technology called ANT, used in games such FIFA, will be implemented into the gameplay. ANT will offer a more realistic player movement mechanics; for example, the ability to transition into cover, turn head before body and mount weapons on almost any surface you encounter.

The battlefield series was always known for the huge multiplayer battles, allowing players to pilot a variety of vehicles and engage in team-based combat. Battlefield 3 will offer all of the previous â€¦ and more.

Set in the year 2014, You will take control of Sgt. Blackburn and his five-man squad on a mission to locate and return a second squad that had disappeared while investigating a possible chemical weapons site in the Iraq-Iran Boarder. The last known location of the investigation squad is a market controlled by a local militia group named Peopleâ€™s Liberation and Resistance (PLR).

The second playable character in the campaign is Corporal Jonathan “Jono” Miller, a tank operator seen in the famous tank battle video from E3. Miller will be part of a tank assault operation on a PLR rocket battery site before advancing to what appears to be a burning city.

Donâ€™t expect much use of Vehicles during the campaign though, as they will be limited.

In a pre GDC 2011 interview for GamesOnNet, DICE general manager Karl Troedsson mentioned that the campaign will be within the 12-hour figure.

A lot of people don’t want to jump straight into multiplayer. They want to feel around a bit and they’re ready to move over to online.

Weâ€™ve also learned why you canâ€™t shoot civilians in Battlefield 3. In an interview with RockPaperShotgun.com, Battlefield 3’s executive producer Patrick Bach talked about the level of authenticity in the game, and he mentioned that players won’t be able to shoot civilians accidentally or intentionally.

A co-op debut demo with the mission “Exfiltration”, a mission with the task of snatching an informant and escorting him out of the city, was shown in Gamescom 2011. 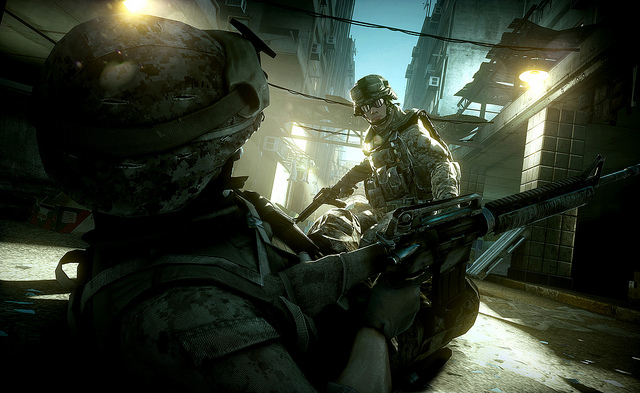 As far as we know, the mode will consist of ten maps with Six missions available at launch. The missions will have different difficulty levels and achievements and Each map should take between 20 and 50 minutes depending on the difficulty. Players will be able to revive their downed partner, and downed players will still be able to defend themselves with the secondary weapon and possibly crawling to cover.

It is worth mentioning that the driven co-op missions will benefit your multiplayer career, as there are a number of weapons that you can unlock in co-op and take with you to the multiplayer mode.

In an interview with Gaminglives.com, DICE GM Karl Magnus confirmed that co-op wonâ€™t support split screen play, however DICE noted that their new â€œFREEâ€ Battlelog network will be connected to co-op matches and will allow players to check their friends score and track their performance.

The console version will feature 24 players battles with Four classes available to choose from: Assault, Support, Engineer and Recon. 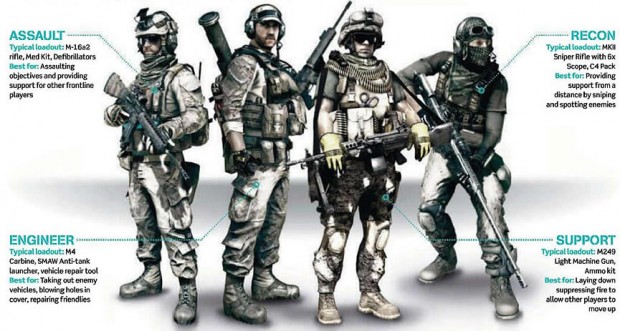 The assault class will be able to equip defibrillators and medkits. The engineer class‘ primary role is to engage tanks and armored vehicles with an array of rocket launchers or anti tank mines (and to repair team vehicles). The recon class will be able to install a radio beacon anywhere on the map for other players to spawn on and call in artillery strikes, and, finally, the support class will provide heavy fire from a Light Machine gun and resupply teammates with ammunition.

Several BF2 maps will return with â€œBack to Karkandâ€ DLC (Available for free upon pre-order). The maps are: Strike at Karkand, Gulf of Oman, Wake Island, and Sharqi Peninsula.

As for the game modes, we can confirm Conquest, Conquest 64 (PC only), Rush, Squad Deathmatch, Squad Rush and the new/old mode to the series, Team Deathmatch.

Killcam will be available in Battlefield 3 and you will be able to turn it on and off, depending on the server settings.

The open beta is scheduled to start this month on all platforms. 48 hour early access will be granted to those who bought Medal of Honor: Limited Edition or Tier 1 edition.

The exact date of the beta will also be announced this month. For more info and common questions regarding Battlefield 3 beta, check out this link.[tab:END]

The game is set to be released on October 25, 2011. For more information on the pre-order exclusives check out our other post.