Why The Walking Dead Is My Most Anticipated Zombie Game

The number of video games featuring undead enemies is becoming as common place as TV shows and movies starring vampires. Eradicating zombies became popular with Capcom’s Resident Evil games, but as that series moves away from the traditional brain dead opponents in favor for the “infected”; it’s been up to other titles to share their take on the zombie apocalypse.

Dead Rising, Dead Island, Dead Nation, Yakuza of The End, and now, Lollipop Chainsaw, all put gamers in the hands of protagonists more than capable of defeating zombies with their eyes closed. Sadly, just like Resident Evil, all of those games lack the one element I’ve been looking for in a zombie oriented action game, and that’s the scare factor. Fortunately, Telltale Games’ upcoming episodic game, based on Robert Kirkman’s graphic novel “The Walking Dead”, seems to fit the bill in that department and more.

Though little is known about the The Walking Dead game right now, according to previews, gamers will play the role of average citizens faced with the horrible circumstances of a world crippled by the zombie outbreak. The human element the The Walking Dead will offer separates it from the crowded pack of zombie games, and that’s what appeals to me. 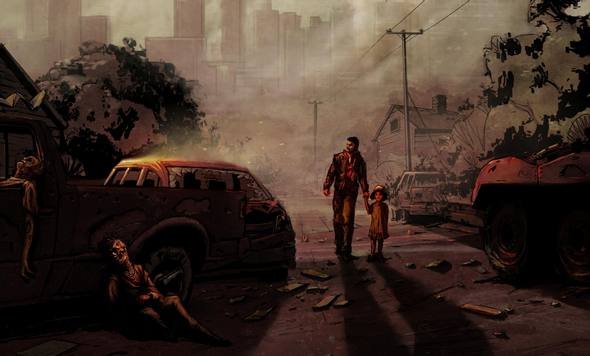 As far as playable characters go, in the first episode of The Walking Dead, gamers won’t be in control of the usual individuals armed to the teeth with enough weaponry to level a small city. Instead, we can expect to play the part of a criminal and a young girl as they try to find other survivors and seek shelter from the apocalypse. One of the features in the The Walking Dead won’t be about simply choosing which firearm will be best to use against your opponents. Rather, players will be faced with making life or death conscious choices. Choices in which one will have to decide who, amongst said friends, will live and who is going to become zombie food.

The fact that I’m a big fan of the comic and the TV series is another reason why I’m looking forward to The Walking Dead. However, if you’re looking for a new approach to a played out video game setting, then knowledge of the series the game is based on isn’t required, but it helps. So far, compared to other zombie titles releasing this year and beyond, The Walking Dead is shaping up to be the kind of horror game I’ve been waiting a very long time for.

Back to the Future Episode 5 Review