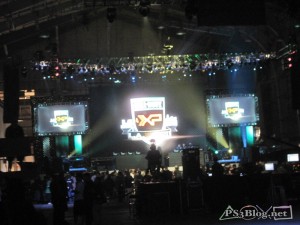 Greetings readers. Like it or not, the Call of Duty series is here to stay, and you’d be lying to yourself if you never heard of this game franchise. In a push to create hype and beat down its competitors, Activision along with sponsors such as Mountain Dew, Gunnar optics, Doritos, and another video game company console unleashed the Call of Duty XP event in Los Angeles.

The event was held in a hanger where Howard Hughes built the Spruce Goose. The hanger was transformed into a gaming arena with each areas serving up different modes, game play, and giving the general public who paid the $150 fee a taste of whats to come in MW3. Me and Oly had a chance to attend this event and it sure did not disappoint. Personally, I prefer 3rd person shooters, however there is just something about the COD series that you cant help but notice. Each area of play was comprised of stations. Every time a participant completes or plays in one of the areas, he or she is rewarded with a patch. There were 12 patches to collect, and 2 patches that were exclusively obtained only by VIP wristband holders.

The atmosphere of the place was filled with hardcore gamers. There was even a retail store area where you could purchase a blank shirt and have your PSN name screen printed on the back. VIP’s were treated with an open bar, and complimentary drinks and food.

The best part of the event were the gift bags. For the $150 admission you basically get a free hardened copy of the game upon release. So the $100 already pays for itself there. Now for those of you who thought you can get away with getting one for your friend, guess what… You couldn’t. Each admission wristband were scanned upon giving you the gift bag so if you try to get another, you automatically get rejected. The gift bag included a limited edition Modern Warfare 3 Mountain Dew can, a couple of sponsor coupons, and silver tin. Inside the tin was a voucher with the redemption code to redeem your free hardened edition copy of the game, a thank you note from Activision, and woven patch from the event.

Oly and I did not participate in the outdoor activies. The outdoor activities included a 100 yard zipline, paintball in the “scrapyard” map, test driving a Jeep, and “the pit” course recreated. Overall I had an awesome experience and they got me thinking about MW3 and wanting to tell everyone about it. Kudos to Activion for a job well done.