Before I get to my review of Deus Ex: Human Revolution, I highly recommend watching this video. It shows a great deal of the way the game is played, and how there are many different choices and ways to play the game.

You play Adam Jensen, an ex-SWAT specialist who’s been handpicked to oversee the defensive needs of one of America’s most experimental biotechnology firms. Your job is to safeguard company secrets, but when a black ops team breaks in and kills the very scientists you were hired to protect, everything you thought you knew about your job changes.

Badly wounded during the attack, you have no choice but to become mechanically augmented and you soon find yourself chasing down leads all over the world, never knowing who you can trust. At a time when scientific advancements are turning athletes, soldiers and spies into super enhanced beings, someone is working very hard to ensure mankind’s evolution follows a particular path.

You need to discover where that path lies. Because when all is said and done, the decisions you take, and the choices you make, will be the only things that can change it.

Deus Ex: Human Revolution is definitely about choices. Set in 2027, the game starts with you returning to work at Sarif Industries, with the job of hunting down the group responsible for the attack and your near death. Adam has been almost fully augmented with enhanced body parts. Everything from your limbs and eyes, to your lungs, have been replaced with new cyborg like parts. 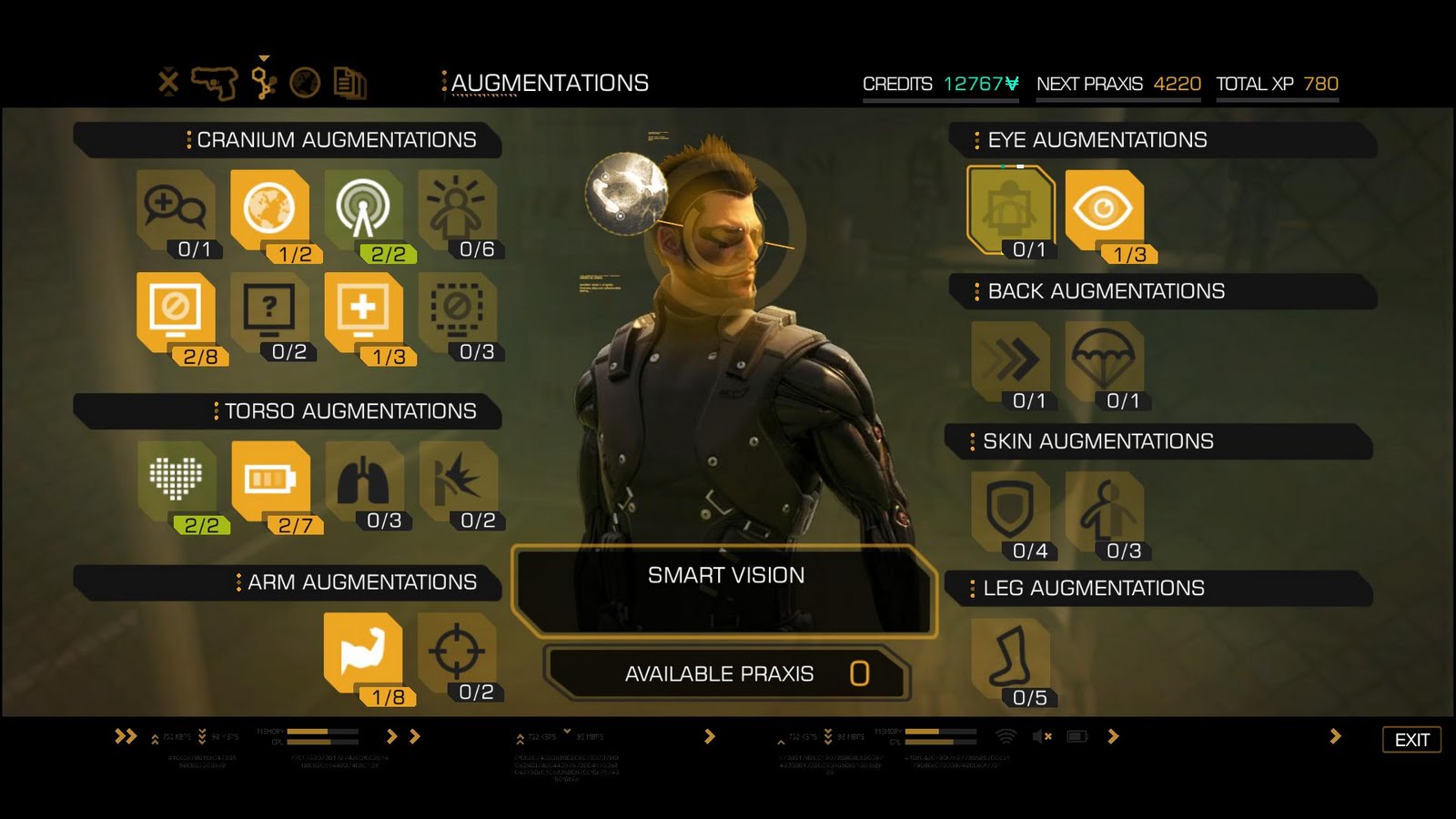 Part first person shooter, part RPG, when you gain enough experience points, you are awarded with a Praxis point. This Praxis point can then be used to upgrade an existing augmentation. Want to jump up nine feet? Want to see through walls? Want to shoot bullets from your chest? Want to become better at hacking computers? Well those are just a few of your choices when upgrading an augmentation. The upgrades you will want to choose, will also depend greatly upon how you want to play the game.

In Deus Ex: human Revolution, you are basically given a point to reach on the map, corresponding to your current objective. Sneak in here and read this file, meet this person to get a clue, save the hostages, etc. How you go about getting to that objective can vary greatly.

The game is primarily played from a first person view, but when taking cover, by hiding up against wall, or behind objects, it switches to third person. The game can be played, with the exception of boss battles, completely as a stealth type game, reminiscent of Metal Gear Solid. There is even a trophy for completing the game without killing anyone by your own hand, and another for not sounding any alarms. 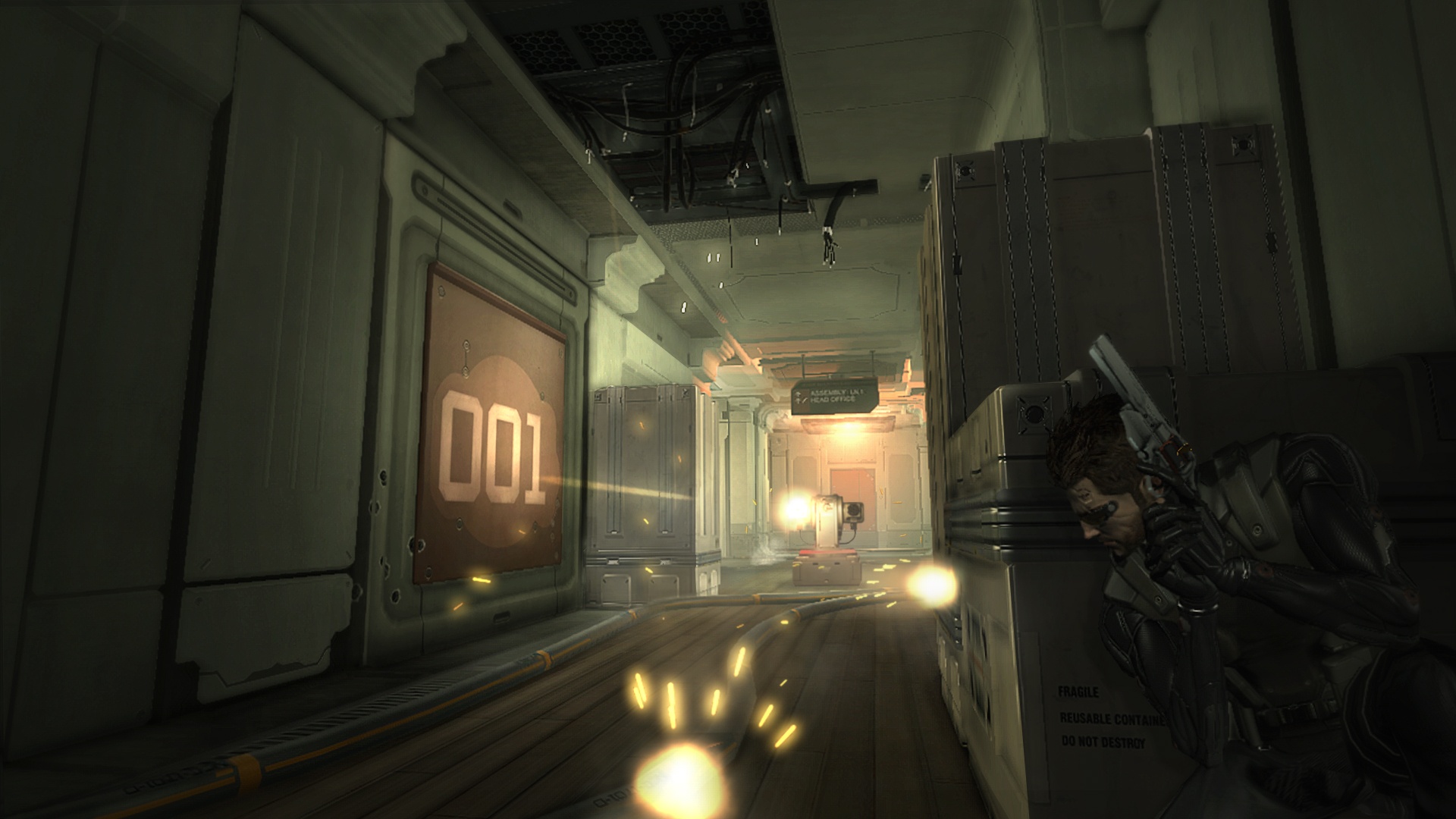 The game can also be played, the way I did, as a tactical shooter. Playing it like you would Call of Duty, with guns blazing, and taking 30 bullets before dying, will not work with Deus Ex: Human Revolution. You would run out of ammo too quick, and also die very quick. If you are the type to want to kill everyone that moves, you will need to plan your attacks wisely. Shoot these three guys, then duck behind cover and wait for the next opening, for example. Or, take someone out quietly from behind, drag them to where no one will see them, and search them for credits, ammo, documents, or enhancements.

Guns, which are also upgradeable, can be silenced, and used to quietly take out an enemy. Another way to quietly take out an enemy is via melee. Melee is all done by pressing the circle button, for a quiet knockout, or holding the button, for a louder kill. Your chosen action is then shown as a third person cut scene. These scenes vary widely, sometimes choking the victim out, sometimes breaking an arm and hitting the throat, and even, with an upgraded augmentation, taking two enemies out at the same time. 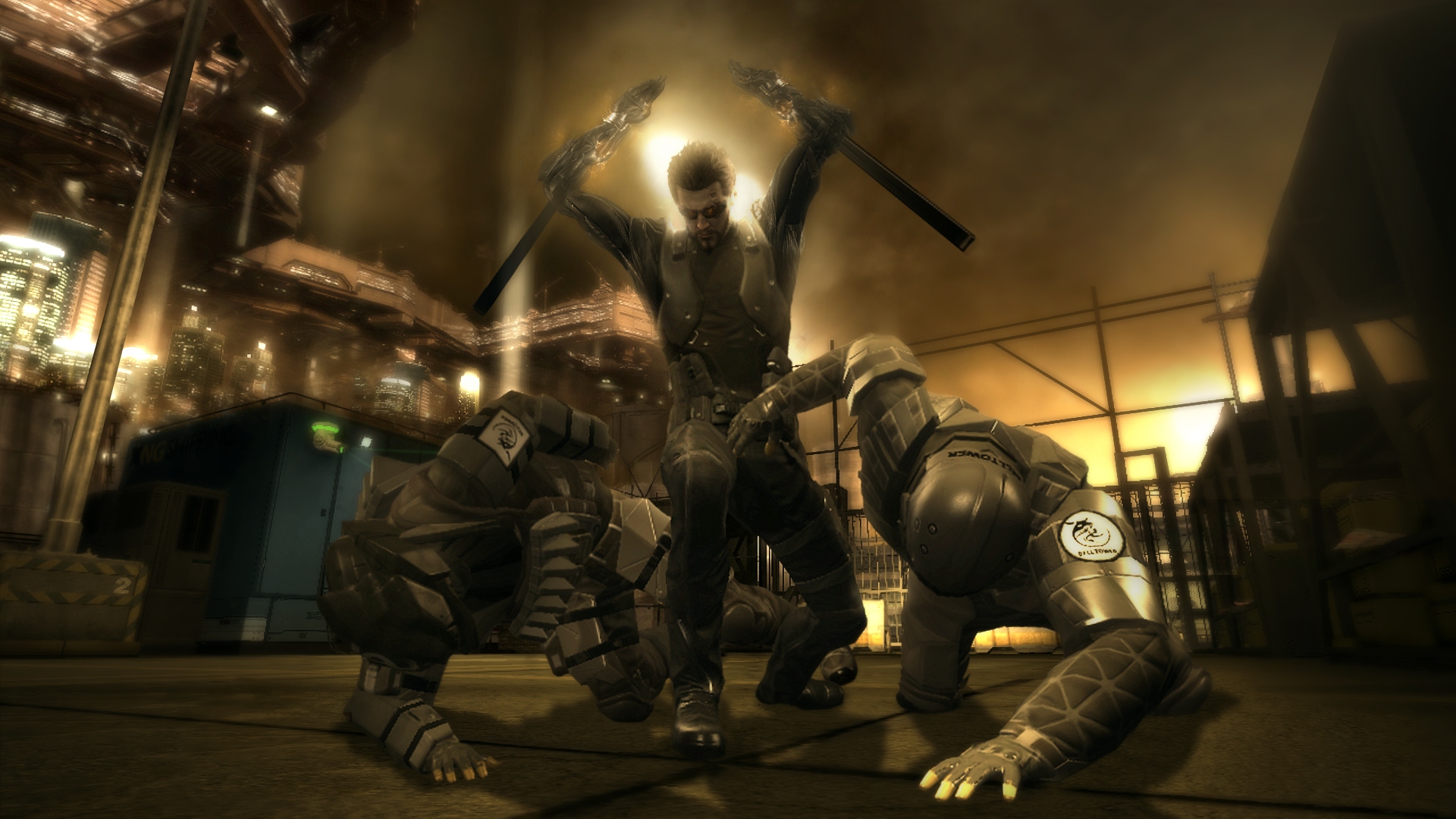 At first, I was a little disappointed, as I wanted to be more involved in the action, but as I progressed, I actually wanted to see these scenes more and more. They were all done very well, however there were some issues with them. A couple times, Adam would come out of a wall, as a graphical glitch, and sometimes, no matter what angle the enemy had been approached, Adam would always appear from behind.

It was also fun planning a melee attack at times. If I run toward these three guys, I can shoot the one in the middle with my silenced pistol, and as the other two turn to see why he fell, melee attack them. Or, do I just sneak past them? More choicesâ€¦.

Getting past enemies by shooting, or by stealth, isnâ€™t the only choice in the game. Getting to your objectives opens many choices as well. For instance, getting to someone inside a guarded club could be done in a number of ways.

Do you bribe the doorman 500 credits for a club pass, or do you just take him out and steal the pass? If you do and someone sees, you might have to fight my way to the objective.

If you have augmented your strength, you could move one of the heavy dumpsters and crawl in through an air duct, or the sewers, bypassing the guards completely.

If you have augmented your legs for jumping, you could jump to the fire escape, climb to the roof, and sneak in from there.

No matter what choice you take, you will probably come across a locked door, and/or an alarm. You will also come across locked computers and safes. These locked items, all have terminals that can be used to open them, either via a pass code, or by hacking. Each terminal has a rating between 1 and 5. Only by upgrading your augmentations are you allowed to access the higher terminals.

Pass codes can be obtained from emails on computers, or from datapads on fallen foes. Hacking in Human Revolution opens up a mini-game. The mini-game can be quite fun, and very rewarding. The game is best described by watching this video.

Once the terminal has been hacked, the door can be opened, the alarm system can be shut off, or the computer can be used. On computers you will find either emails with information, or security access. With security access, you are able to view surveillance cameras, shut down motion sensors, and even control robotic defense systems if your augmentations allow. 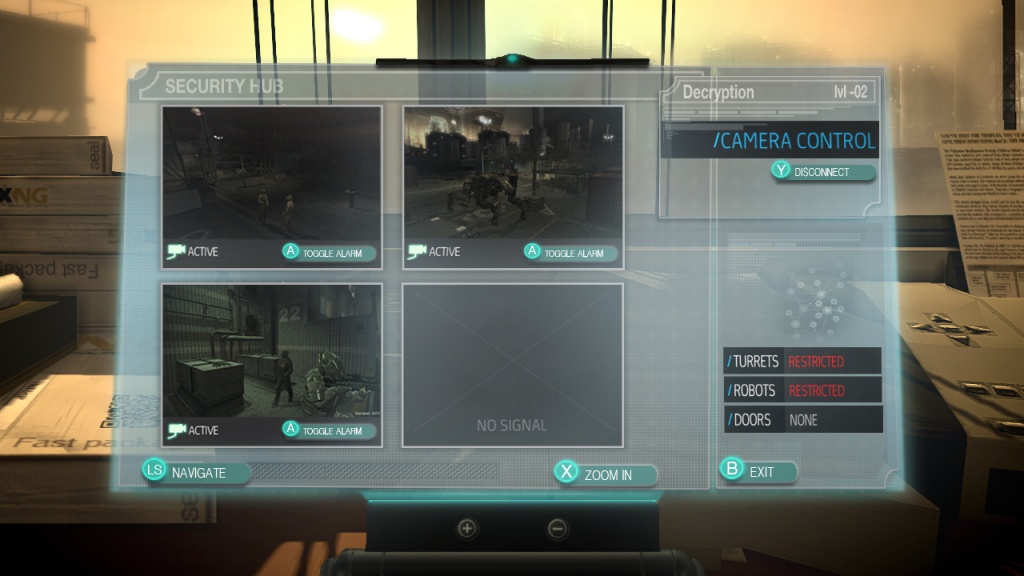 Although Human Revolution is not completely open world, you do have the availability to explore each city as you see fit. Finding the right person in the right place can also open up many different side quests available in the game. These side quests also allow many choices. At one point, to solve a dilemma, you are put in a situation to help or hinder someone. To help, you need to either kill or frame someone. Each choice has a different result, and reward, including trophies. Many of the side quests actually have two different trophies available depending on your choices. 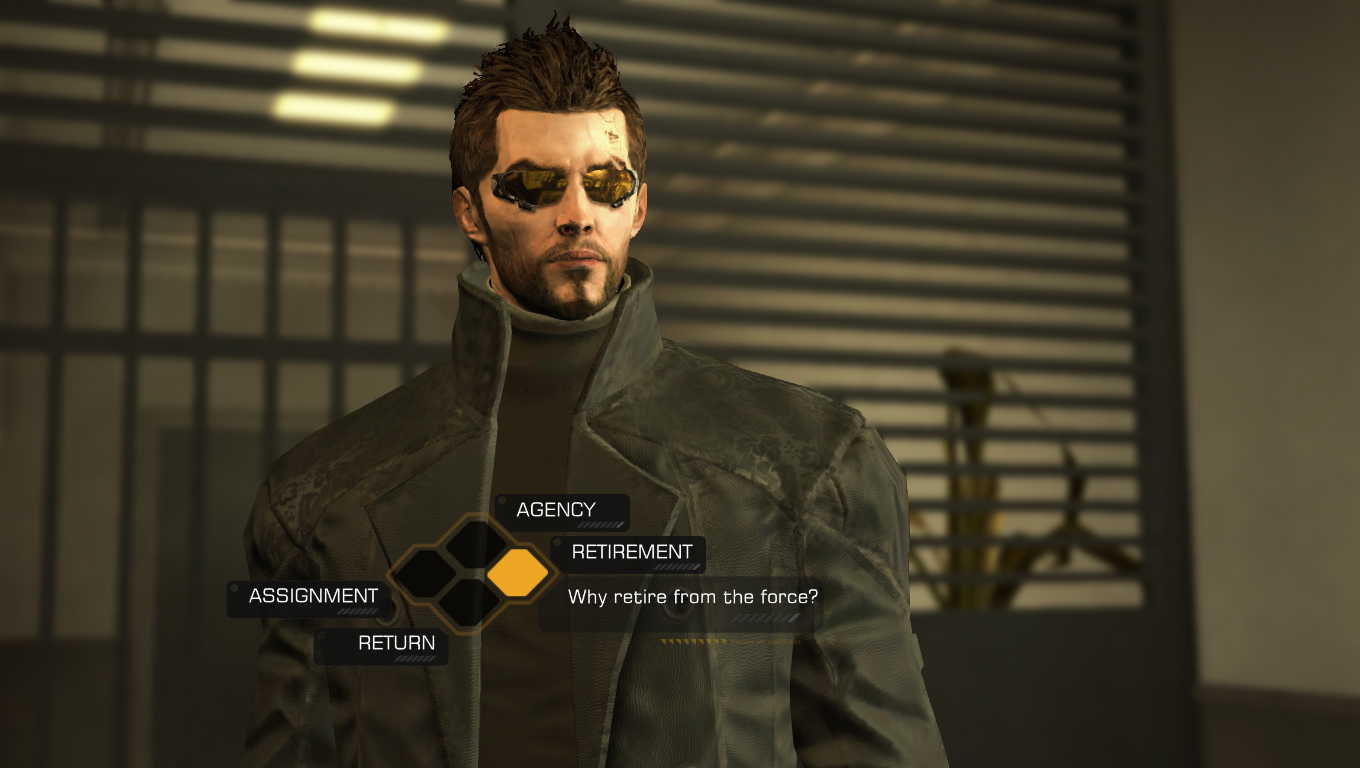 Some people you meet in the game will need to be persuaded into doing something for you, or revealing something to you. This is called conversational combat. There are three different statements or questions at each stage that you need to pick carefully to get what you want. Thereâ€™s also a social augmentation that helps you to read a person, helping you to make the correct choices. If you choose wrong, you will need to figure a different way to meet that objective.

Over all, playing through Deus Ex: HR was a great experience. Beside the few glitches mentioned above, the only other issue I had with the game was the long loading times when reloading a saved game. I would definitely recommend Deus Ex: Human Revolution to any one that enjoys a good game. I feel any FPS fan, and those that enjoy tactical shooters like Metal Gear Solid, would really enjoy it.

This review is based on a retail copy of the PS3 version of Deus Ex: Human Revolution provided by Eidos Interactive.