Renegade Ops is a game that does not take itself seriously with itâ€™s over the top voice acting and its clichÃ© characters. You can tell it get its inspiration from 80’s action movies. We have the bad guy you love to hate, Inferno, who wants to blow the world up. Your typical “I am a big tough guy that takes no crap” General Bryant, who wants nothing more than to stop him. The UN are talking about negotiations with Inferno, which pisses Bryant off. He rips off his insignias, storms out, and swears to put a stop to Inferno. Now the fun begins. You start off getting to choose between four characters, each with their own vehicle, skill tree, and special power.

Graphics
The game does look very nice. The cut scenes look great with their comic book style graphics, the environments with cities, and dirt roads. Now, where the game excels is at explosions and collapsing buildings, which both happen very consistently throughout the game as you crash through or shoot down buildings, vehicles, and enemy watch towers.

Sound
Sound is nothing groundbreaking, but is well done. Music choice is good, giving a nice atmosphere to the game. Your vehicle driving around does sound like something out of Micro Machines, but I have to say, I do enjoy it. When you shoot a vehicle, it gives the nice sound of bullets hitting metal, and you can always hear things explode. The voice acting is way over the top, but since this is not meant to be a serious game, it does work for it.

Gameplay
The aim of the game is pretty simple: most missions involve “go here, blow this up” or “go there and kill this guy,” with an added side quest as well, on all of the missions. They involve collecting items to help out villages, or, for some reason, collecting some artifacts that Bryant believes belong in a museum. You will also get to fly a helicopter in a couple of missions, which is nice for a wee change of pace.

Each of the four characters play slightly different from each other, with their different special powers, making a big difference. You can tell that the some of the characters were made with multiplayer in mind to add some strategy. Like using Diz’s EMP pulse to disable enemies and then Gunnar’s heavy machine gun to pick them off. This comes in really handy, since when you use Gunnar’s special power, he can’t move, which leaves him easy pickings for the enemy.

The controls in the game are simple dual stick controls, with the left one to move and the right one to shoot. They feel tight and very responsive, which can lead to a difficult time when driving through narrow spaces, as you may crash a lot into the tress or cliffs. The movement is very well done as you speed around massive maps, sliding around corners, and jumping off cliffs. All the while shooting enemies, blowing stuff up, and destroying buildings as you drive through them or land on top of them. You also use L1 for your secondary weapon, which range from rockets to a flame thrower. R1 uses your special power, and holding down X uses your turbo. 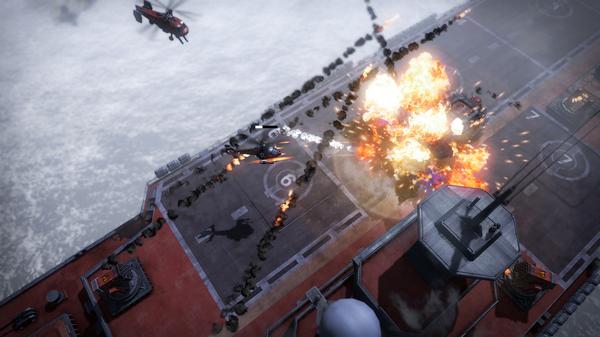 Replay Value
I am personally not a big fan at all of going back and replaying levels; there are very few games that I play twice. But when it comes to Renegade Ops, I have played through some of the missions a few times each. I played the demo around 4 times before I was able to get my hands on a copy of the game. Each character gives each play through a nice, wee twist, such as vehicles do not control the same and you can’t drive into the middle of the enemies and call for an air-strike then run away, as you can do with Roxy. Plus, for those score whores out there, there is a leader board for you to try and become number one. So, keep on blowing crap up, ramming the enemy, and get to the top spot.

Conclusion
This game was an amazing surprise for me. I did not know what to expect when I downloaded the demo, and I loved it from the start. Multiplayer is a lot of fun with some friends. Also, being able to use the mic to talk to each other is always good and should be a requirement for multiplayer. With nice graphics, sounds, and amazing gameplay, it’s certainly a game I will be playing for awhile and hoping that they come out with some DLC.

This review is based on a retail copy of the PS3 version of Renegade Ops provided by Avalanche Software.

How Big is RAGE?