Carnivores: Ice Age is a sequel to Carnivores: Dinosaur Hunter, a game release from Beatshapers that we’ve already reviewed here at PS3Blog.net. How does this new offering stack up to the last minis release in the series? Let’s find out!

Carnivores: Ice Age throws you onto a recently discovered planet to test your aiming and tactical skills on a realistic ice safari. The game delivers an intelligent hunting experience and offers a lot more than a visit to a shooting range. Unrivaled possibility to wander around the open 3D world without limits makes the process of finding prey exciting and the whole game endlessly replayable.

The hunter, equipped with weapons and all sorts of hunting accessories like camouflage and cover scent, needs not only to be quiet as a mouse when approaching a saber-tooth beast but also take care of wind direction and covering his human smell not to end up as an animal’s dinner. Better AI of the animals turn them from dummy targets to aggressive hosts protecting their planet and add an action to the gameplay.

Pack your equipment and start hunting in Carnivores: Ice Age as you are ready to explore the new huge world and think before you shoot.

Everything controls in the same way as its predecessor and here’s a quick reminder to get you up to speed:

L: Change to weapon
R: Fire
D-Pad: Left and Right to use the Dinosaur Call; Up to use binoculars; Down to toggle the map.
Analog Stick to view around
Right side buttons (Square, X, Circle, Triangle): Used to move as if it was a 2nd D-Pad. 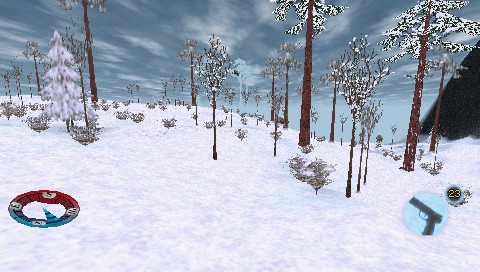 Want to know what you’ll be hunting? Then check the list below! As was the case with Carnivores: Dinosaur Hunter, the number show is the amount of points you need to have to be able to hunt for them:

The bigger (and more expensive) the prey you’re hunting, the harder it is to find them as they’re available in lower numbers. Wild Boar are EVERYWHERE when you hunt for them but that elusive Yeti usually spawns only in 3-4 spots in the map at most. Also, the more expensive the prey, the easier it is for them to kill you if you’re not careful so be sure to spend some points in some very powerful weapons to actually have a chance!

And you’ve also got a new weapon to go along with the new paint of coat and it’s a veeeeeeeeery powerful (but very expensive) one: a Laser Sniper Rifle. How powerful is it? It can kill a Mammoth in a single shot. Yes, you read that right. A freaking Mammoth. Down. Single shot. BOOM! You’ve got to save a lot of points for it but once you can use it in your hunting trips you can step up your game and, unless you like to get three feet away from danger, nothing can stop you.

Some things that were a bit annoying on Carnivores: Dinosaur Hunter have been fixed in this sequel. All the pop-in and use of fog of war that were always present in the last game have been reduced quite a bit in Ice Age AND the game even runs at a faster frame rate and all the animations seem to have been polished a bit as well which makes this a better experience overall.

Carnivores: Ice Age proves that sequels can do the right thing and be better than their predecessor. More weapons, more prey and a better presentation make this minis an easy game to recommend since it’s price tag to fun ratio is very favorable.

Disclaimer
Total amount of time played: 6 hours.
This review is based on a retail copy of the PSP version of Carnivores: Ice Age provided by Beatshapers.