Elevator Action Deluxe is one of those games you don’t really know what to expect at first, but can be quite fun if you let it. I should let you know, this isn’t really my kind of game and maybe I didn’t follow my own advice when I played trough it, so I’ll try to make things simple and talk about the good and the bad things about it. Firstly, this is a modern day version of an arcade game, and the original is fully contained in this downloadable title, so, in case you’re feeling nostalgic, or just want to check it out of curiosity, this is a nice addition.

The mechanics of the game are quite simple. You’re placed on a building with a bunch of doors and elevators with the objective of collecting some “classified documents” and progressing trough the exit. Of course, it’s much easier said than done. There are a bunch of enemies around with the sole purpose of making your life difficult. Levels get pretty crazy fast enough, and before you know it, there’ll be more doors than you ever expected to see in your life. This is where one of those weird design decisions take place; even though you can zoom out any time with the click of a button, it’s impossible to leave it zoomed out. It gets particularly annoying when you’re playing on a huge level with a lot happening and have to figure out a way to get from a point to another. 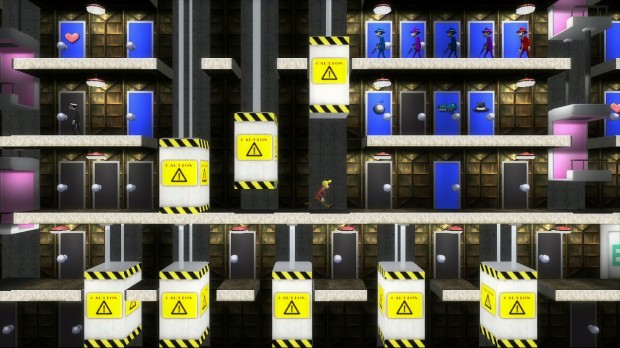 I was positively surprised to find out levels were not too easy at all; some took many attempts to beat, and only once I could get a silver medal on the first try. This guaranteed a good level of entertainment because it kept the game interesting and never could I simply rush trough it mindlessly. To beat a level (bronze medal), you simply need to collect all classified documents and get to the exit before the timer runs down. Getting a silver medal means you’ll have to do that and get a given amount of points, while gold medals require you to do all that and achieve different goals like “complete level in # seconds”, “complete level without being detected”, “complete level without killing any enemies” and such; those particular examples will give you extra points regardless.

Graphically, the game is well undeveloped (that might be a understatement); texture work is practically nonexistent, models are extremely simple, and effects look out of place. If this was a way to reference the arcade game, I certainly didn’t get it. I’ve seen a good amount of PSN titles that found out a way to work out simple and beautiful graphics without the need to invest a lot of time and money into it, so I was certainly intrigued by the choice. Again, if you’re able to look past it, the game is functional and fun, but if you’re a bit like me, you’ll possibly keep asking yourself “Why?”. 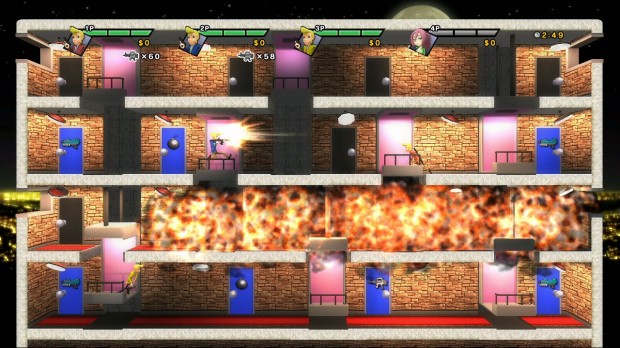 Unfortunately sound design isn’t very impressive either. The soundtrack is what you’d expect from an elevator themed game and it wasn’t long until I turned the music off. Sound effects are okay, but kind of weird, because most don’t really sound much like what they’re trying to represent. Possibly this is one of those things that are made on purpose, but difficult to understand.

Menus are organized and easy to navigate and controls are simple enough and do their job well. The only move that felt a bit unresponsive was jumping and it was the cause of many deaths. Maps (all 50 of them!) are ranked online and, if you’re competitive, leaderboards will possibly consume you. For example, on the first level, the guy on top has over 100k points. My best score was a little over 30k and I was certain I had made an exceptional run. That was when I came to the conclusion I suck at this game so this could possibly be the reason for that; I’ll let you guys decide.

Finishing all the levels could take anywhere from 5 – 7 hours, depending on your skills, going for all golden medals possibly will take you twice as that, because (in my experience) you’ll have to replay every single level for it! Any cleared level with a gold medal will unlock an extra, which is nice. All the ones I unlocked (not that many really) were arcade game posters. Honestly, it’s a lot of content for a PSN game; one thing I personally always look for when deciding if I should purchase something. 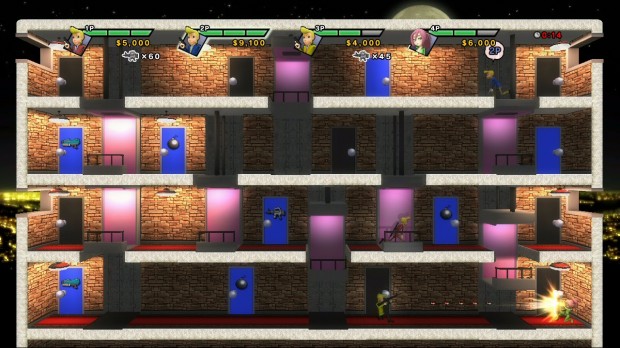 Multiplayer modes look a lot of fun (couldn’t really experience it on my own) but are local only, a bummer for those who don’t have company all the time. You can play a cooperative campaign or competitive levels. Either way, the objectives are the same. One thing that was really frustrating about it is that the camera view is always zoomed out in this mode, just like I wanted it to for the single player campaign.

Elevator Action Deluxe offers many challenges for those willing to play it, but the only people that will be able to fully enjoy it are the ones able to look past its flaws. Even now, writing this review, I’m having doubts about whether I liked the game or not, I’d say I had some good fun with it, but still one of those titles that should be played by people who appreciate this kind of game or those looking for some nostalgic moments.

This review is based on a retail copy of the PS3 version of Elevator Action Deluxe provided by Taito.