The original video game femme fatale, Rayne, has returned to battle and feed in a brand new hack â€˜n slash adventure. Slay ghastly enemies as Rayne, the sexy Dhampir with superhuman strength, speed, and agility, recruited by the vampire hunting Brimstone Society for one last mission. The target is a lavish, yet sinister ball in a secluded castle with plenty of dark and gruesome surprises. With the help of a mysterious friend, and members of Brimstone, Rayne must infiltrate the manor, take out the fiendish horde, and stop an evil master plot once and for all.

After that great trailer, let’s get the control layout out of the way so we can sink into the rest of the review:

Circle is used to Infect enemies (after you’ve hit them at least once so you can stun them)
Hold DOWN Circle to Suck their blood and regenerate your health.

Triangle is used to make any infected enemies go Boom-Boom.

R2 shoots your gun (and you’ve got a limited ammo count to work with).

R1 switches guns (once you get the second one).

L2 is used to dash… and is THE most important ability you have. You’re REQUIRED to dash past enemies and their attacks in order to survive since right after you dash (and right until the precise moment when you stop) you’re invincible.

X is used to jump AND to do a backflip by pressing the directional buttons in the opposite direction you were traveling at.

Square is used to Slash and you can combo this by pressing it two or three times after the first hit. Combo you get out of it depends on the timing and the total number of hits you’re about to deal.

Your journey begins as they all do: diving into action while riding inside a Rocket Coffin. You arrive in a Rocket Coffin… you leave in a Rocket Coffin. The first one flies, the second one crushes the ground. It’s just how Rayne likes to roll in these desperate times… you dig? Just because this is a task presented to you by the Vampire hunting Brimstone Society doesn’t mean you can’t do things in style! 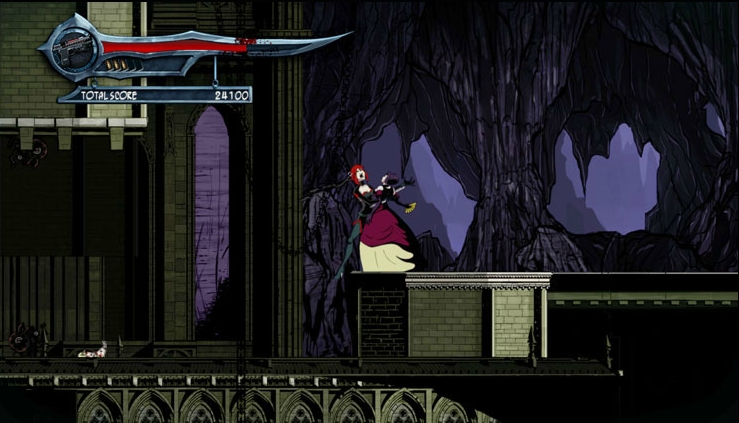 Most fights in the game can be avoided but there are several mandatory ones sprinkled on every level. You’ll know when you’ve reached one since the screen stops scrolling and a LOT of enemies start to pour in from magical portals. It is here where most of your score will be achieved since completing a mandatory fight before the timer runs out grants you a small points bonus (300-1,000 points at most) BUT finishing the fight without getting hit grants a bigger 2,000+ bonus points and when you realize there’s 4-7 mandatory fights per level AND you can get a theoretical 1,200-7,000 bonus for the level due to the timer AND a 8,000-14,000+ bonus for not getting hit…well, it adds up and FAST. I was able to get a Damphir rank in 6 out of the 15 levels available in the game and I was practically required to do a perfect run to get there. Only in one level did I have an extra 10,000 points left after the final tally but that was due to some very awesome fighting on my part, something that I was never able to replicated again.

The Bonus score you receive at the end of the level is needed to reach the top rank. How do you get said extra points? One is tied to how quickly you can finish a level while the other takes into consideration how much damage you’ve received during the level. Being nimble, being quick, kicking ass and fighting slick is the way things are supposed to be so you better be great with your fingers and have a good enough reaction time to not only complete the game but to actually make a dent in the score leaderboard. As such, the online component in the game consists of said Leaderboard which helps to keep track of all high scores obtained on the game so you can bring your EGO down a peg or two when you realize your “awesome and huge score” is not that awesome nor huge… AT ALL. The game awards extra point during each fight for performing special “Feats” and this can be awarded for something as simple as killing an enemy or for something as specific dashing through an enemy attack right before it’s about to hit you.

Died? You loose a chance to gain a high enough score when you’re graded at the end of the level… but at least there are checkpoints available so you don’t loose your progress. What are these checkpoints? Why, blood fountains, OF COURSE! They also recover your health the first time you touch them which is a nice side bonus to it all. 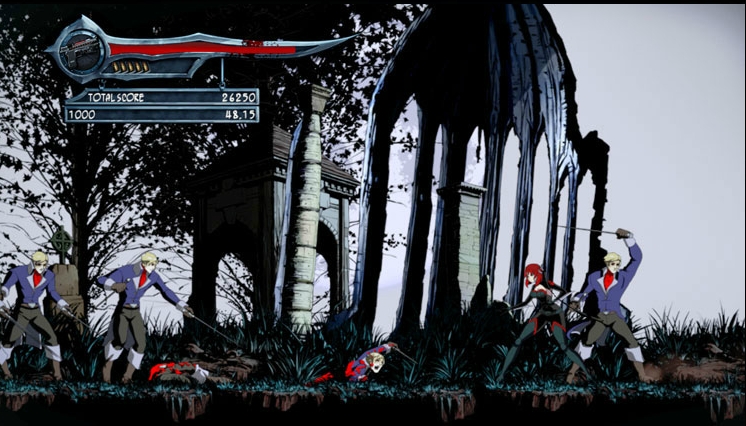 After finishing level 1 I got a rank of C (which stands for Cadaver) and that is awarded when you score points somewhere in the 25,000 to 49,999 range. I replayed the level thinking I must have gotten a low score because I missed some bonus treasure or me not being fast enough at fighting the enemies and it turns out I was right on both accounts since small, medium and large treasure play a huuuuge part on you getting the 30,000 base score you need to add to the 70,000 points total bonus between speed and health so you can reach the S (Dhampir) rank. After clearing level 1 I was eager to see how much I’d improved and was greeted by the letter C again, barely scratching the 40,000 mark. Took me 10 tries before I could finally reach an S rank… and then I realized there’s a trophy for getting said rank in ALL levels in the game! Sure, I’ll get back to that by the end of the year once I’ve got the extra time needed. Thanks!

The soundtrack for the game is great. An energetic, dynamic and moody combo that perfectly suits the atmosphere of Bloodrayne: Betrayal. What’s even better than an awesome soundtrack? An awesome 8-Bit soundtrack as a bonus that unlocks with a very special code that I’ll gladly give to you in the next spoiler proofed solution:

[spoiler intro=”8-Bit Is Back!”]
While on the level selection screen, simultaneously press L1, R1, L2, R2, L3, R3, Start and Select.Yes, that is all at the same time. 8 buttons in total. Hard to do… which is why you ALSO get a trophy for doing so![/spoiler]

There are several boss fights available in the game (you even fight the same enemy type twice thanks to some thinkering and improvements made on the “model”) and these will truly test how good you’ve gotten at knowing how to play the game and make the most of the fighting system set in place. Luckily, when you die you just have to start the fight over and are not taken back to bite your way ahead of the smaller enemies once again. Some bosses will take you one or two tries, some will take you twenty. One requires you to defeat it without being dealt a single point of damage and another is cheap as hell (and we ALWAYS need one of these to bring back memories of x-Bit eras past). They’re almost all huge ones that really show all the work WayForward has put into the art and animation sides of the game (of which they are experts as they’ve shown us in all their recent releases in the last couple of years) and will help us realize how awesome a 2D Castlevania with hand drawn 720p artwork would look.

Bloodrayne: Betrayal is a very fun old-school-based action game with great 2D artwork and animations that make everything pop and feel different from other games. Those gamers that got to play releases from the late 80s-early 90s will enjoy this more than others that grew up post N64-PSX as it seems their tolerance for hard, methodical and awesome 2D games has been diluted thanks to all the “me too” shooters and platformers they’ve played in the last decade or so. 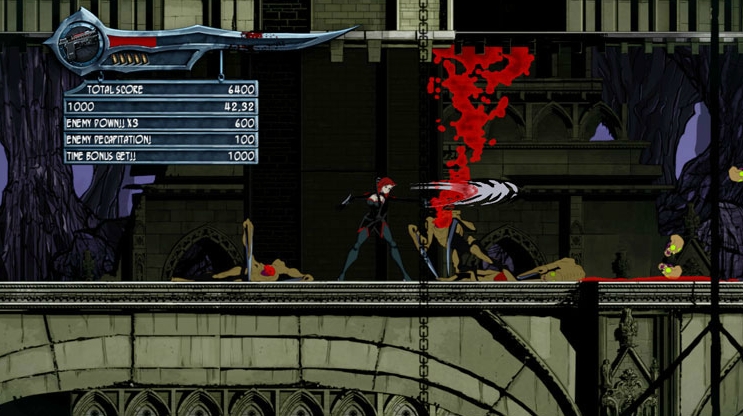 Published by Majesco
Developed by WayForward

– Game was completed before writing this review.
– Total amount of time played: 10 hours.
– This review is based on a retail copy of the PS3 version of Bloodrayne: Betrayal provided by WayForward.