Conquer the Galaxy like never before! Galcon Labs is an awesome high-paced galactic arcade-strategy game. Send swarms of ships to defeat enemy planets and conquer the universe! Play an exclusively designed for PlayStation Minis version campaign mode and unlock the four innovative new game modes to you:

* Billiards : “Moving Planets” – need I say more? With a constantly changing battlefield this game never has a dull moment.
* Stealth : Enemy ships become invisible, changing Galcon into a game of inter-galactic hide and seek!
* Crash : Ships battle in mid-flight, bringing a whole different twist to the classic gameplay. You can now defeat the enemy in the air!
* Assassin : Each opponent is assigned a target. The first player to annihilate their target wins the round!

Want to get a quick idea of how this game works and are you too lazy to watch the trailer above? Ok, here goes a quick explanation: Remember Mushroom Wars on PSN and how fun it was? Same genre here which is great… but this is more fast paced and you don’t have to worry about different types of anything.

In Galcon Labs you’re tasked with conquering the universe, one planet at a time. Both you and your opponent are trying to eliminate each other AND gain control over as many planets as possible to increase your ship production and therefore have a bigger fleet than your opponent which will allow you to send him into oblivion… until the next match has started. Eliminate the threat and steal all enemy controlled planets to win!

Controls are easy enough and only take a minute to understand. You navigate between the planets with either the D-Pad or the Analog stick, use the R Button to select the planet where your cursor is OR use the L button to select ALL the planets in your control. After that you can send 50% of your entire fleet to attack a neutral or enemy controlled planet by hitting the Square Button or send your entire fleet by pressing the triangle button. Once your choice has been made you can’t control your ships until they’ve finished the attack. You LOOSE the spaceships you use to conquer a planet (my take is that they’re fighting either the neutral forces on unclaimed planets or on enemy controlled ones). Be sure you don’t use your entire fleet to conquer a lot of planets at the same time since it will leave you in a weak and vulnerable state in which your enemy cab easily swoop in and take you out with a small attack group. 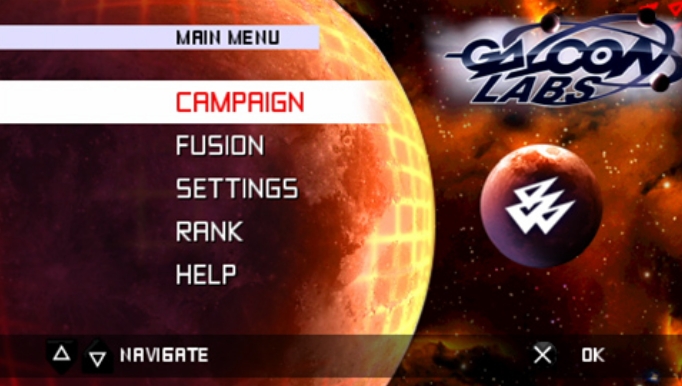 Unclaimed planets show up in gray and the number shown on their surface represents the number of spaceships it takes to convert them and it’s usually the case that bigger planets require more ships for you to be able to conquer them BUT the bigger the planet the more ships you can produce once you claim it which can help you to quickly recover.

To start things off you must battle through all 20 levels available in campaign mode in order to unlock the other game modes that the game has to offer. As you progress the enemy becomes smarter and the number of enemy ships will no longer be displayed on the planet you intend to attack. When you run into a new mode during you campaign AND you beat it you’ll unlock it the second half of this gaming package: Fussion. The Campaign mode is only 20-30 minutes long and it’s just preparing you for Fussion since you can’t replay any of the levels in unless you delete your save file.

What IS Fussion? In it you gain points to increase your rank (going up through 10 ranks in all) and you do so by playing in all 5 battle types (and can select between 10 difficulty levels as well) we’ve discussed at the start of the review. How are points awarded? Glad you asked!

– Time bonus: How quickly you finish the battle.
– Mode bonus: Depending on which one you play you’ll get more points. Classic gives 100 points and it goes up from there.
– Hardness bonus: 100 points for super easy and an extra 100 for each difficulty increase.

I played Fussion until I reached the top spot in the ranking (Master of the Universe) and then continued to play just for fun for another hour and a half without even noticing it. This is a game that would greatly benefit from some online multiplayer but since its a minis release there’s no way that could have even been considered. 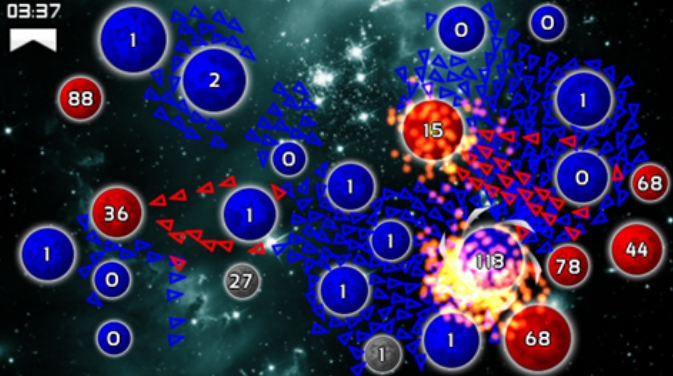 Galcon Labs is a great game that is inexpensive and will give you more than enough fun for your investment. As is the case with all minis, it has the extra incentive of being playable either on your PS3 or on the go on your PSP (and remember, you can transfer your saves between said systems). Beatshapers is definitely on a roll and I hope they continue to provide us with great minis and PSN releases (I wouldn’t mind a sequel to Stardrone!).

– Game was completed before writing this review.
– Total amount of time played: 3.5 hours.
– This review is based on a retail copy of the PSP version of Galcon Labs provided by Beatshapers.

PAYDAY: The Heist Coming Next Week