Oly, Kane, and I were lucky enough to get hooked up with Premium Passes and attend the biggest Uncharted 3 AMC theaters event in L.A. This L.A. show had most of the cast in attendance. The 4 hour event started with registration, where they verified your identity, gave you a badge, and a card that contained a validation code for a free copy of the game. The UC3 game will be shipped to us one week before release! You had to register your address onsite using the card.

Soon after registering, we started to mingle around with the talent that was there. We got a couple of pictures and posters signed, by most of the crew. 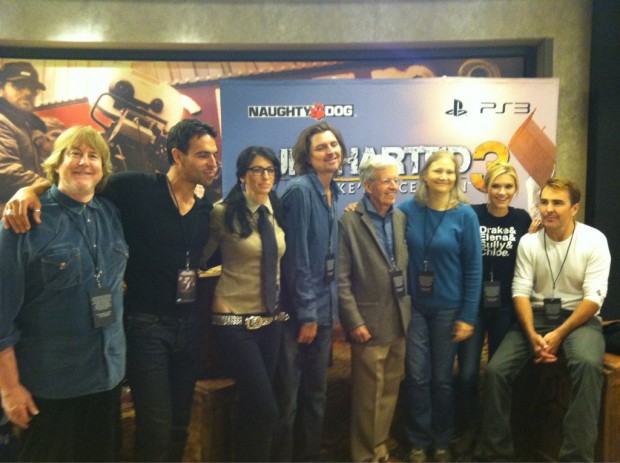 The Naughty Dog crew who were presented by an over zealous announcer, were on hand showing single player gameplay footage, and a bunch of trailer re-runs re-formatted in 3D. There was also a point where Nolan North (Drake), came up to pitch his book coming out soon on Amazon. Oly and North had a decent conversation, and Oly should have some giveaways coming from him in the near future.

After a question and answer period with the talent, a tournament commenced consisting of 5 person teams, each randomly selected. So if you brought your clan with you, you were basically screwed because they built the team up with random strangers. Every weapon and all the kickbacks were unlocked for us, so it made for some fun, new gameplay. I got stuck with team “Drake”, which was the first team to be eliminated, because honestly, my team was a “Noob”. I ended the game 9/4, and defeated, by Oly’s team. Kane112’s team also lost their first match. There were a total of 16 teams, playing with 5 minute rounds, or first to 30 kills, rules. Oly got all the way to 3rd place with his team “Sully”, where he got his only kill, yet a game winning kill, by dropping a grenade upon his death. 😉

Oly hooked us up with VIP status, and the rest of the night we were treated with free food from the concession stand with a VIP meal card. Between each game of the tournament, they treated us to new trailers, as well as 2 partial level playthroughs. There was also a drawing for different prizes between each tournament match. The final match of the tournament was played on the never before seen, Museum map.

Overall I give the event a 5 out of 5 because of the overall cleanliness, friendliness, and organization. There was no official meet and greet with the talent but it was so good to see them interact with fans on a personal level. No words can describe how talented and amazing this group of people are! A big thank you and appreciation to Sony, Naughty Dog, AMC theaters, and the staff at the event, for giving us a memorable experience!