The team at Dice Interactive has pulled together some neat stats for the beta and have also released what changes have been made. 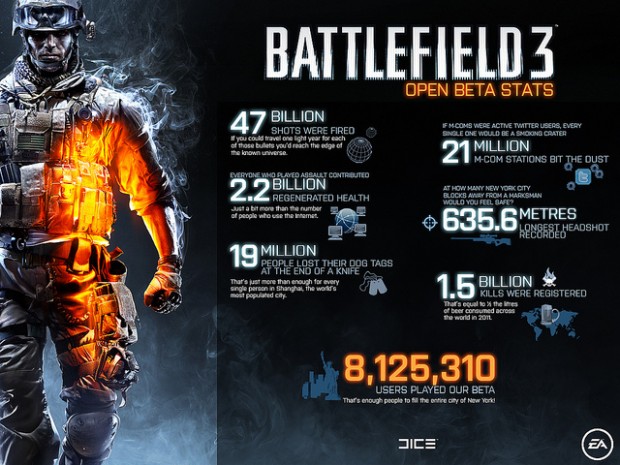 Improved Squad Functionality
There will be improved squad functionality in the retail game (including but not limited to): the ability to create squads prior to launching into a game, sticking with your squad when joining a game and continuing together through future games (if team balance on the server allows it), inviting friends to a squad, and changing squads once in game.
.
More Accessible Settings Menu
The ability to modify your settings via the deploy screen has been added into the retail game.
.
Improved Kill Cam
In the Open Beta, the Kill Cam would sometimes behave erratically. This has been fixed for the launch of the retail game.
.
Netcode Optimization
The netcode is one of the many things that we tested as part of the Open Beta and it was not necessarily reflective of the final retail game. The DICE team appreciates, and has heard, the feedback youâ€™ve provided and is further optimizing online play.

Get Call of Duty: Modern Warfare 3 for 99 Pence in UK