Dark Souls is one of the best games I’ve ever played. I have no doubt about that. Being a huge Demon’s Souls fan, this has been on my radar ever since it first was announced and I honestly can say this is one of the few games that lived up to its own hype. After all, I’ve bought 3 copies of it and I still don’t think I wasted money. One of those is the Collectors Edition I got from pre-ordering the game, amazing content for no additional costs (all publishers should follow this example), the second I’ve bought because I’m only going to get the first late in December and I simply needed to play the game before that, however that one got terribly delayed, so I went on and bought another one.

Long story short, I was dangerously excited and had extremely high expectations for the game. Fortunately, my expectations were surpassed and my excitement only got bigger. I’ve spent an astonishing 60 hours with the game over just one week and I didn’t skip work once! But enough about this rambling and, like Monty Python and the Holy Grail would say “GET ON WITH IT!”. Oh, and I’ll be making this review newbie friendly, so you’re welcome if you’ve never played Demon’s Souls or Dark Souls.

The first thing you’ll notice when you start the game is the dark and eerie setting, and soon you’ll be introduced to the unforgiving nature of it. Shortly thereafter, you’ll discover the most amazing thing about it: the best control scheme I’ve ever seen. Trust me, it’s that good. Skyrim is partially copying some of it. I have no doubts that this combination is what makes the game so great, because you’ve got a huge challenge ahead of you (especially if you’re not used to RPGs and more so if you haven’t played Demon’s Souls extensively), but all the tools needed to overcome it are there. You only need to learn how to use them. 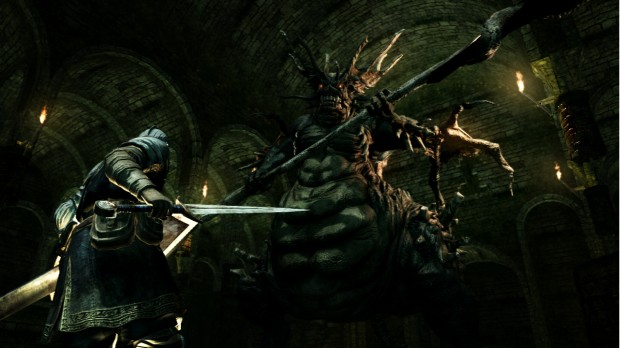 The world of Dark Souls is huge and totally open for your exploration. You can finish the game and be completely unaware of many areas. Everything is permitted and whatever you see far in the horizon is a place you can go. In this sense, it is very rewarding, because some of the most precious moments of it will only be shown to those who take the time to look for them. The diversity of environments really impressed me. There are dozens of different ones, from foggy forests, to crystal caves, to creepy abandoned castles and some disgusting poisonous swamps; you’re never tired of looking at the same thing for too long.

The lightning is impressive, reflexes, humid walls, fire and so much more set the tone perfectly. Most of the game is pretty dark, which makes you appreciate it even more. I’ve noticed some weird shadows under platforms where monsters stand, but it didn’t bother me. Textures are also very well done. Most of the time it’s difficult not to pay attention to the great amount of detail put into each room and corridor. Weapons, character models, and especially armor sets are a work to be reckoned. I constantly took a little break from all the killing and dying just to take a look at what beautiful gear had I amassed during my latest travels.

As I said, the controls are perfect, shoulder buttons control each hand individually (L1 and L2 for left and R1 and R2 for right) and you can choose the intensity of each move (L2 and R2 for a stronger attack), the same goes for blocking or casting. The chain of commands will trigger different combos, all of those you should be very aware of, because they’re needed. You can also combine that to other actions such as rolling and jumping for even more results. The great thing about Dark Souls is its flexibility. For example, I play as a melee heavy class, but with zero investment in any stats I can wield very strong fire magic, it’s all about equipment.

This shines when you’re having trouble getting trough an area and realize all you need is a change of strategy. Another great thing is that the developers decided each group of weapons should have a very similar damage output, so in the end, you’re faced with the question “What is your favorite move set?” This is interesting because you won’t be seeing the same weapon over and over again like in some other games. There’s only a little problem here: very rarely there’s an input delay and sometimes this means a gruesome death. 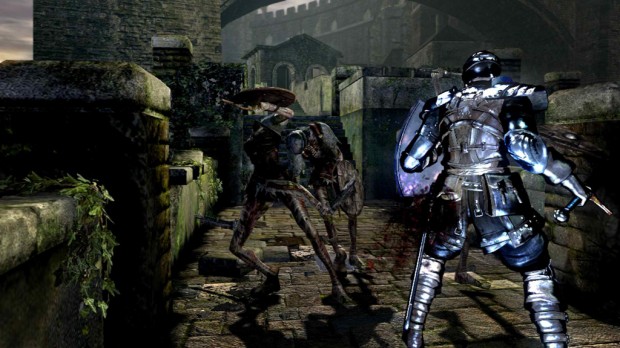 A couple hours into the game I was thanking NAMCO for including the soundtrack with the Collectors Edition, because it is very beautiful and immersive. The deep tones made me feel hollow and scared, weary of each corner, and at times, excited and ready to conquer this magnificent world. I’ll be honest though, I’ve missed the terrifying singing of the Once Royal Mistress in Tower of Latria.

Sound effects are also spot on, be that the clashing sound of a sword against a shield, or the creepy noise of some abomination down the hall. The music is complemented by constant screams and moans, sure to make you tremble with fear of the unknown. For those who have played Demon’s Souls you’ll be reintroduced to some sounds you’ve heard before, which can feel weird, giving how used you may be to some of those. And more times than I’d have liked to, I heard my own footsteps after I stopped walking, that could be an echo, but it just felt really strange.

Possibly one of the greatest improvements over Demon’s Souls is the unbelievable level design. No level feels one directional, and if you intend to get the best of the game, thorough exploration is necessary. Taking risks is more than once rewarded, jumping off to far ledges or falling to some platform down below is advisable, most of the times treasure lies in wait, or perhaps a trapped NPC that is sure to help you for your troubles.

There are dozens of shortcuts and hidden passageways you should take advantage of. Otherwise, you’ll be wasting a lot of time killing some enemies over and over again. This might not be the best news for people who are easily sidetracked, or those in a a hurry, but it’s certainly well worth your time. However, be warned, even though unknown paths are difficult to find, doesn’t mean they aren’t well guarded and filled with traps, so always proceed with caution. This is rule #1 for this game. 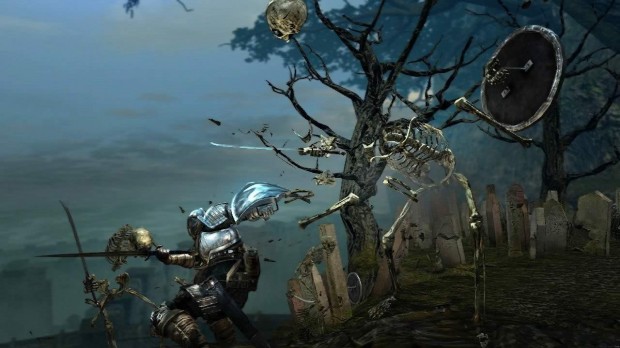 While Dark Souls is not a story focused game, there’s an impressive quantity of lore scattered around Lordran. Most of it in form of dialogue with one of the many suspicious inhabitants of this worlds, but also description texts on weapons and sorceries for example. There are a few dozen NPCs, most with their own story arc, that you should be on the look out for (some of which I’ve missed on my first playthrough). Those make for a fine change of pace, to the mostly lonely journey, usually rewarding your efforts and shedding some light on what you should be doing.

Most have possibly heard about the difficulty of Dark Souls and all the rumors are true, well, partially. Personally, I haven’t found the game that hard, although my good friend Jason told me NG+ is where things get interesting, but I’m not a newcomer to the genre. The cautious nature of the game is where most get lost. Used to easy healing or enemies that don’t really hurt you? None of those are present here.

The key to survival is not getting hit, and playing as a heavy tank, for example, can prove to be very tricky. Every enemy has a pattern and to succeed you should learn it. This game is more about dodging and stepping in at the right moment than it is about sheer damage. Another important thing is to commit to your build, so don’t spread your points too much, otherwise you’ll be stuck with a useless character. I was very pleased with the fact grinding is a lot less necessary in this game. Simply playing will get you enough souls (aka experience points/money) to progress (that is of course if you’re careful). 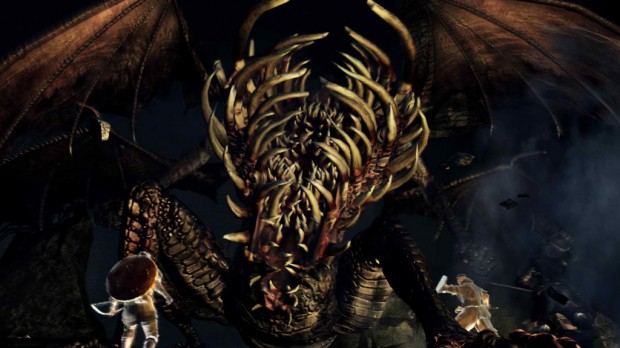 The last important part of the game is the online component of it, an incredible innovative way to interact with others. You can either play cooperatively or invade others and claim their souls, both can be tackled in various ways. Playing this game with others is a completely different experience. It gets a lot easier (even though enemies get tougher) and sometimes is the only way for those who are stuck.

It is nice to give a helping hand once in a while, it feels good. Personally, I prefer PvP and I think it’s one of the best and most balanced systems around. It’s exciting and fresh every time and you’ll be sinking hours into it once you’re familiar with everything. The game wants you to play online so much, there are actually offline characters that simulate online play, which is very fair in my opinion. Some people are complaining about the matchmaking, but I’ve never had any problems myself.

Finally, Dark Souls is impressive. It has everything an excellent game needs: amazing looks, perfect controls, and engaging gameplay. It’s also terribly addicting. Playing it for at least 60 hours is practically mandatory, but I doubt anyone that gets to that mark will be able to stop before a couple hundred more. There’s so much to be said about it, I feel like I haven’t even scratched the surface with this review (and I haven’t) which only proves how great it is. If you’re interested in a challenging, yet extremely satisfying experience, than you should look no further. This game certainly isn’t recommended for everyone. It’s a masochistic experience at times, but it is more satisfying than any other game I’ve ever played.

[review pros=”Beautiful environments
Perfect gameplay
Extremely addictive
Extensive content
As satisfying as a game can get
Never cheap, always instructional” cons=”Disappointing for those who are not up for it
Occasional slow down on some areas
Rare input delay” score=95]

This review is based on a retail copy of the PS3 version of Dark Souls provided by NAMCO Bandai Game. 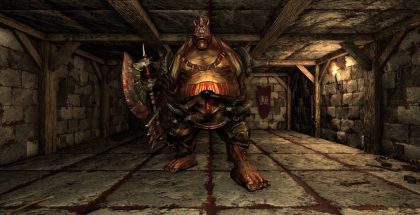 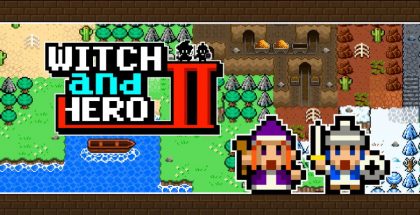