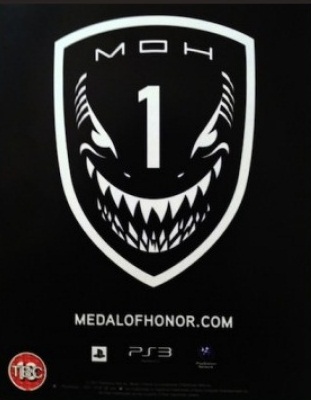 Apparently, early copies of Battlefield 3 have made it to selected consumers. A quick search on Youtube will result in a few unboxing videos of DICE’s upcoming shooter scheduled for shipping on October 25th.

The unboxing videos are not the star of the show, As a black leaflet packaged with the retail game reveals, what seems to be, Danger Close Games (Medal of Honor Developer) next project.

It would only make sense, as Medal of Honor developer Danger Close Games was hiring developers for an upcoming unannounced AAA FPS back in January and it fits perfectly with EA’s plans to release their major sequel shooters on a yearly basis. The black leaflet shows the entails of Medal of Honor and the well known (Tier 1 like) logo with a website address that will direct you to the current Medal of Honor website.

It has been confirmed that Battlefield 3 will include early access to the multiplayer portion of Mass Effect 3 demo scheduled for early 2012, but giving the fact that the Tier 1 editions and the Limited Editions of Medal of Honor (released in 2010) provided us with early access to Battlefield 3 beta, I would say that Battlefield 3 Limited Edition will probably return the favor in 2012. Now the question that many are asking is: Are we ready for a second Medal of Honor? Personally, I found the single player campaign of Medal of Honor satisfying and emotional, but I was very disappointed with the multiplayer experience, as it didn’t deliver DICE’s epic signature multiplayer extravaganza that is Bad Company 2.

Many of whom purchased the game would know that Danger Close Games developed the MOH campaign, while DICE worked on the Multiplayer. I am not quite sure if DICE will be working on the MOH2 multiplayer (I am calling it MOH2 hypothetically), since there are rumors of a potential Mirror’s Edge sequel, or even better Bad Company 3, but I hope that Danger Close Games will take the time to develop a better multiplayer experience after the release of FrostByte 2 engine.

If I had to choose between a new Medal of Honor game or a brand new Bad Company game, I would have to choose Bad Company for sure. What would you choose?