Developed by Slant Six Games and Capcom, Resident Evil: Operation Raccoon City is the new installment in the Resident Evil series. Scheduled for launch on PS3 and Xbox 360 early 2012 and later on PC, the game will feature six playable characters with different abilities and a four players co-op.

The game takes place during the events of Resident Evil 2 and Resident Evil 3: Nemesis, and is set in Raccoon City, whose residents have been turned into zombies after an outbreak of the t-virus, a biological weapon developed by the pharmaceutical company Umbrella. Players will take the role of an officer of the Umbrella Security Service (USS). They have a vastly different objective compared to the Spec Ops opposition: Members of the USS are tasked with destroying evidence of Umbrella’s illegal activities, including killing survivors of the outbreak, while the Special Operations team has to expose the actions of the company.

A Resident Evil: Operation Raccoon City Collector Edition has been announced by Capcom North America and it will contain the following: (See image below) 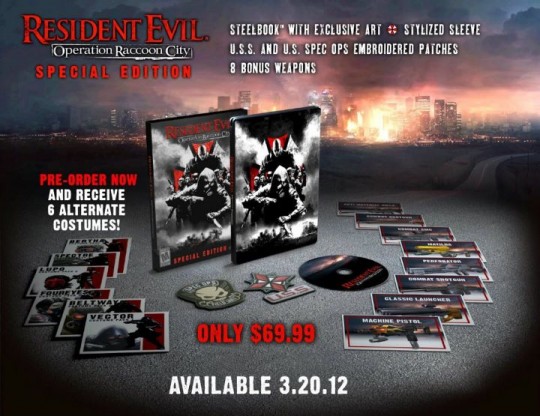 Lifetime PS3 Sales Only 1.3 Million Away From Catching Xbox 360