When Bethesda and id Software, revealed the game Rage, everyone, including myself, was thinking or hoping, that this would be the next Borderlands or Fallout. Well, it does share some similarities to both, however it is unlike them as well.

Check out this video, then hit the jump for my take on this great game.

Rage, was built using the id Tech 5 engine, which provided a very memorable and fun experience. Rage is one the best looking games I have ever played. The amount of detail in the environments is so good, that it looks remarkably realistic in places. At one point I set the camera angle toward the sky, looking just above some cliffs, and had my wife look at it. She thought it was a real picture. The graphics are truly stunning. 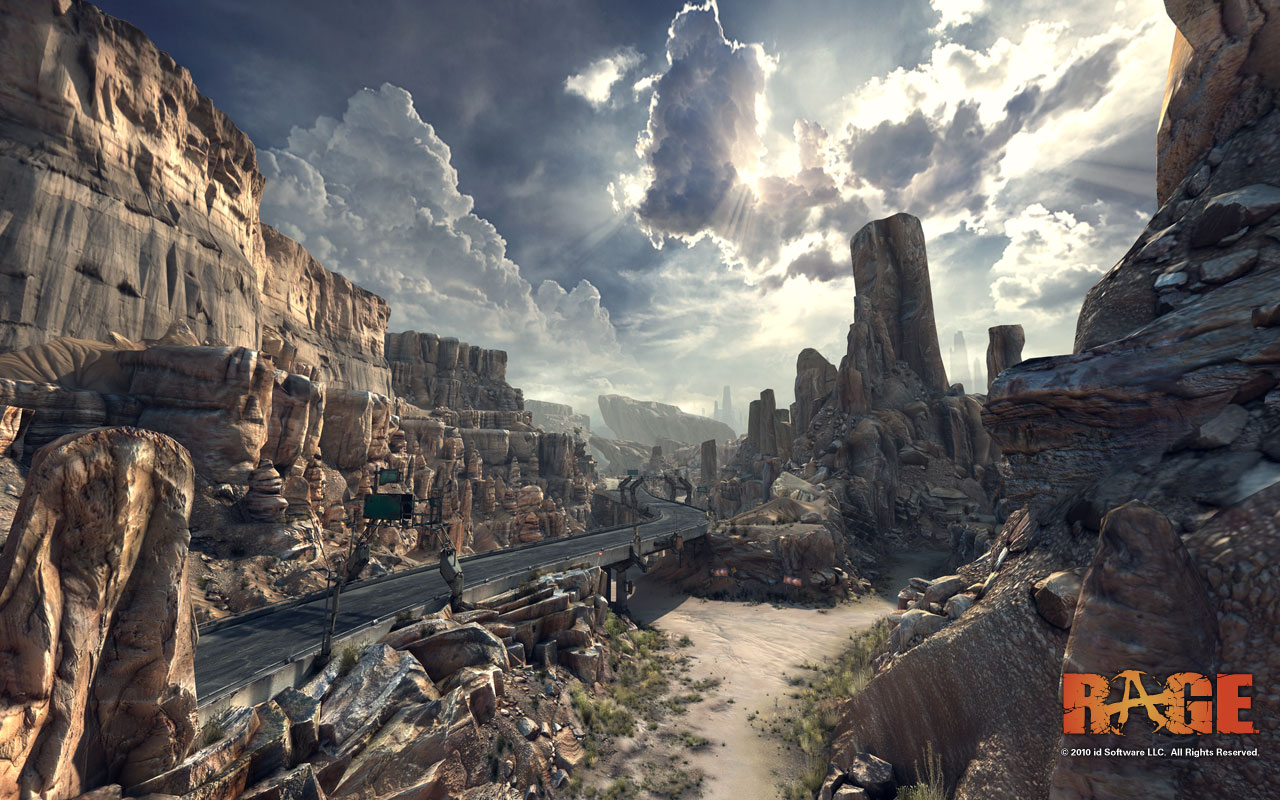 Although better graphically than both, the scenery does have a familiar look to both Borderlands and Fallout. The cartoon-esque style of the buildings and characters has a similar look to Borderlands, and the plot of resembles that of Fallout. For a while anyway.

You play as Raine, an ex marine and special forces agent, who was cryo-frozen in an underground vault know as an Ark. The Ark program was started to preserve life on earth, after the 99942 Apophis asteroid collides with Earth in 2029. This asteroid actually exists.

99942 Apophis ( /É™ËˆpÉ’fÉªs/, previously known by its provisional designation 2004 MN4) is a near-Earth asteroid that caused a brief period of concern in December 2004 because initial observations indicated a small probability (up to 2.7%) that it would strike the Earth in 2029. Additional observations provided improved predictions that eliminated the possibility of an impact on Earth or the Moon in 2029. However, a possibility remained that during the 2029 close encounter with Earth, Apophis would pass through a gravitational keyhole, a precise region in space no more than about a half-mile wide, that would set up a future impact on April 13, 2036. This possibility kept the asteroid at Level 1 on the Torino impact hazard scale until August 2006, when the probability that Apophis will pass through the keyhole was determined to be very small. Apophis broke the record for the highest level on the Torino Scale, being, for only a short time, a level 4, before it was lowered. Its diameter is approximately 270 meters (885 ft). As of October 7, 2009, the probability of an April 13, 2036 impact is considered to be 1 in 250,000.
From http://en.wikipedia.org/wiki/99942_Apophis

Raine’s Ark suffered a cryogenics malfunction as a result of seismic activity, and everyone on board died except you. You awake in 2138, escape the arc, and after a few seconds of accommodating to the sun light, begin to be attacked by bandits. You are immediately helped by Dan Hagar, voiced by John Goodman, who takes you to his very small town. He then explains some things to you, and sends you off on some missions. 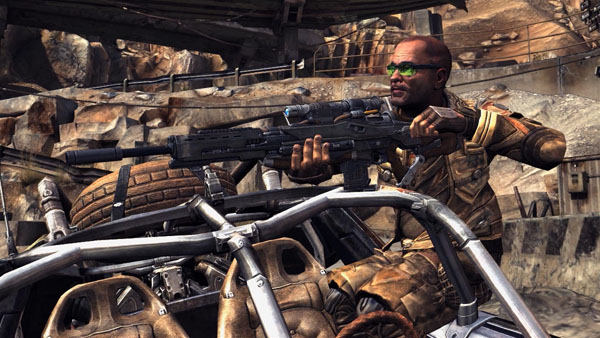 Most of the single player campaign involves running errands for the various people you meet in the towns scattered across the wasteland. Go from point A to point B, fight enemies through this dungeon, find an item, then bring it back to A. Although that sounds repetitive and boring, it isn’t at all.

First off, getting from A to B is best done in a vehicle. When driving a vehicle, RAGE changes from a first-person shooter, to a third-person vehicle game that is actually done really well. You start with a basic quad, but can quickly obtain a dune buggy that allows for weapons and upgrades. These weapons and upgrades become important as the game progresses, because the wasteland is filled with bandits driving other vehicles, bent on killing or capturing you at all costs. There are also vehicle races, delivery missions, and even arena battle modes, that provide both rewards and hours of entertainment. 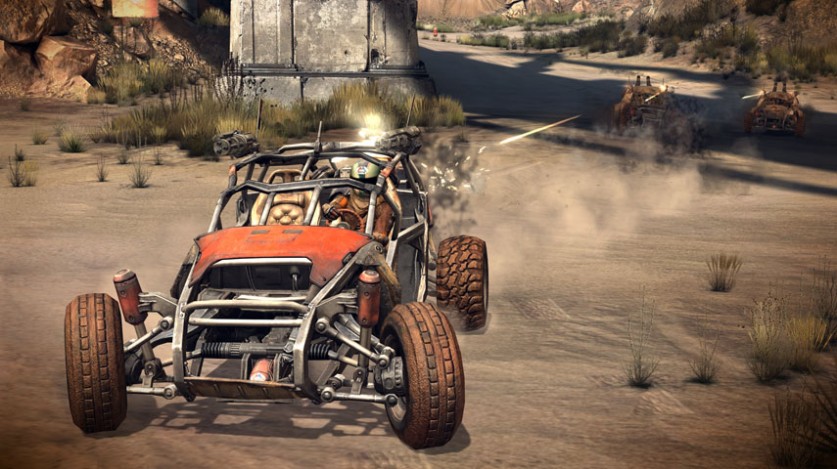 The controls and mechanics are surprising very good as well. This made driving itself fun, and I often found myself trying for bigger jumps, spinouts, and tricks, even when not in combat. The driving is necessary to travel long distances in Rage’s vast world. 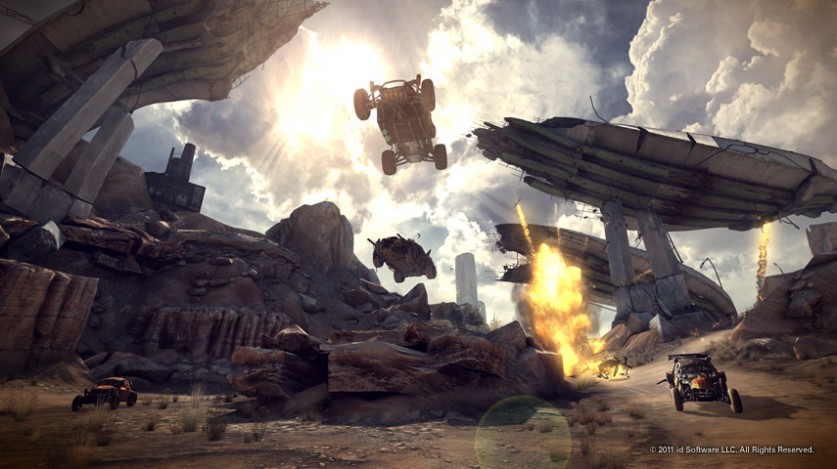 Although open world to some extent, the game actually looks more open world then it is, and with the exception of side quests, is very linear. There are not a whole lot of directional options when traversing a location, but that is fine with this type of game. Rage is definitely a FPS with some added bonuses.

You can have up to four weapons ready for fast swap, but can hold all the available weapons in your inventory. One thing about the game that really pleased me, is that when you were carrying a gun and pointed it toward a friendly NPC, you would point the gun to the sky, rather then aim it at them. This is a pet peeve I have with most other first person shooters, so I was happy they addressed it in Rage. 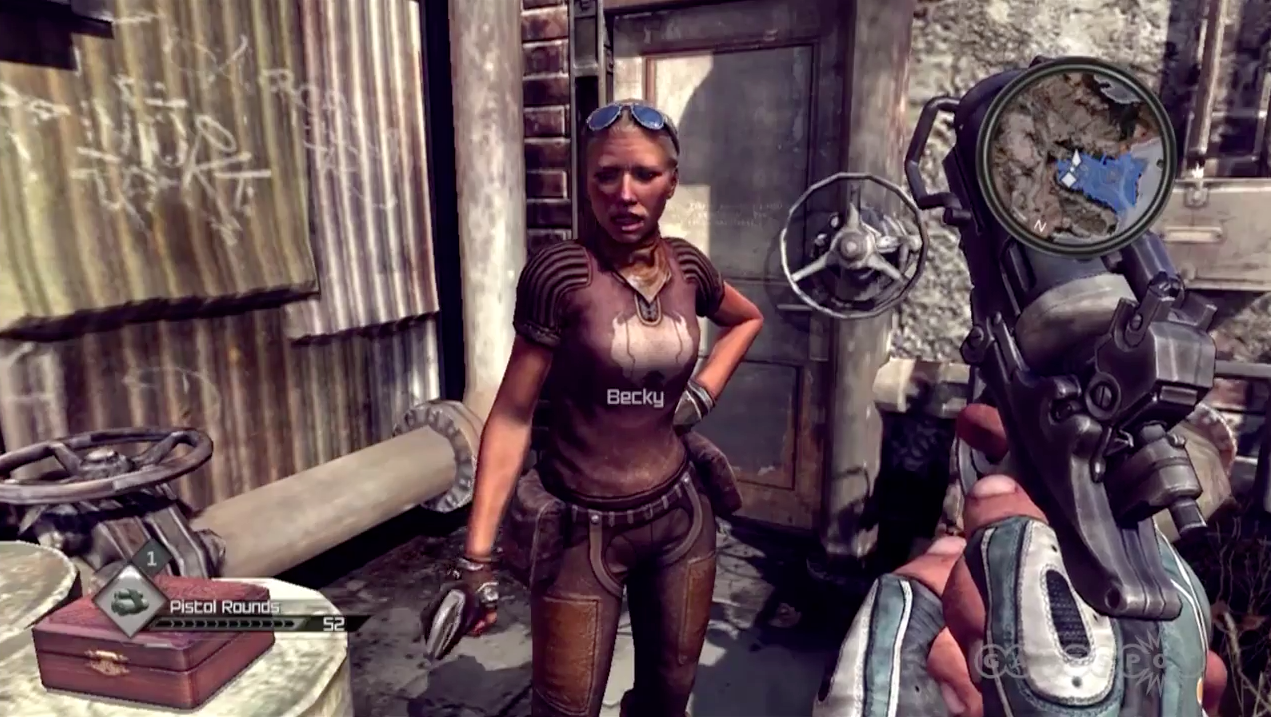 With a few exceptions, the guns available, although unique designs, fit your standard pistol, shotgun, assault rifle, and sniper rifle profiles. A very cool crosbow, a rocket launcher, and even a plasma rifle will also come into play. Different types of ammunition can be crafted or bought for the guns, giving each weapon a few choices. There is also a weapon called a wingstick that can be thrown at will. This was probably my favorite weapon in the game.

These wingsticks act as a very deadly boomerang, and will return to you, destroying everything in its path, if thrown just right. A lot of the time however, it will be broken up and you will have to deplete your inventory of the available wingsticks. It is not equipped instead of a gun, rather it is equipped alongside a firearm, such as a grenade would be.

Wingsticks, along with many other items, can be produced in the game from looted components and an associated schematic.

Other notable items include lock grinders, RC bomb cars, sentry turrets, and my favorite, the sentry bots, a spider like robot with a deadly machine gun. You can have up to three active at one time to help you in the heavily fortified areas. 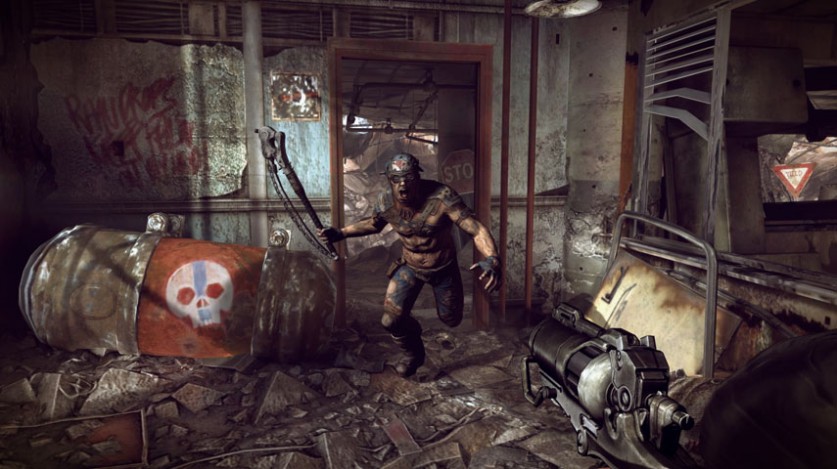 The enemies in Rage are done very well. When under attack, they will cover, blind fire, and even switch positions to try and get a better shot at you. Some will even hide behind other enemies holding energy shields. Other, melee type enemies will run at you in a zig-zag pattern, ducking and dodging your bullets, and even jump on walls, and swing from the ceiling, making them almost impossible to target. 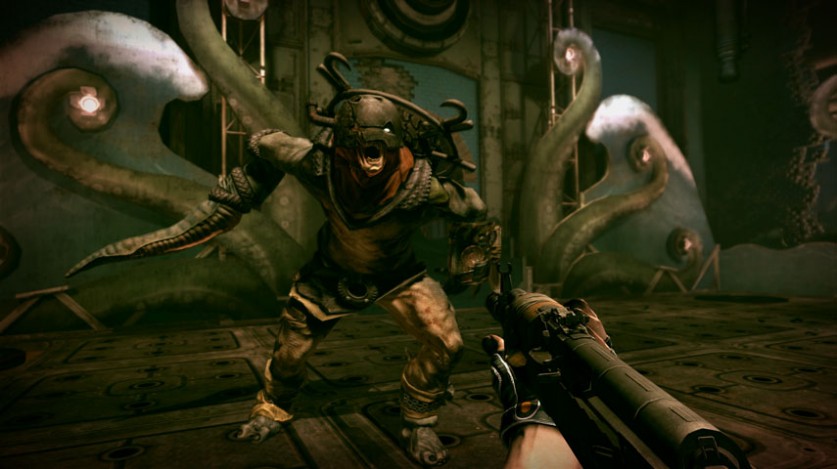 Besides the main missions and side quests, there are also mini-games to play. I already mentioned the buggy races, but there are also a few easy to learn games. Tombstone is a random dice roll game involving holographic figures. Although simple, it actually became rather addicting. 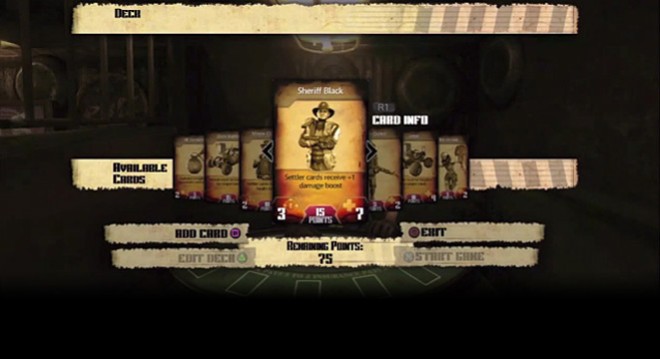 Throughout the missions, and scattered around the world, you’ll find 54 different cards to use in a Magic the Gathering type card game called Rage Frenzy. It is a fun and addicting game as well. There are also a couple other mini-games, including Five Finger Fillet, and Strum, a Simon Says type game.

Another mini-game happens each time you are close to death. A defibrillator can bring you back to life and shock any nearby enemies. The amount of health returned to you is determined by how well you play this fast paced mini-game. Before using the defibrillator again, it will need to recharge. If you die before a recharge, you will respawn at the last save point, a good reason to save often.

The only real issue I have with the game, is that it ends abruptly without any big resolution. There also isn’t the “big boss” type ending that you would expect. It does however leave you longing for more, and that’s possibly a good thing if there is a sequel to be made. More can also be had in the co-operative play in Rage. 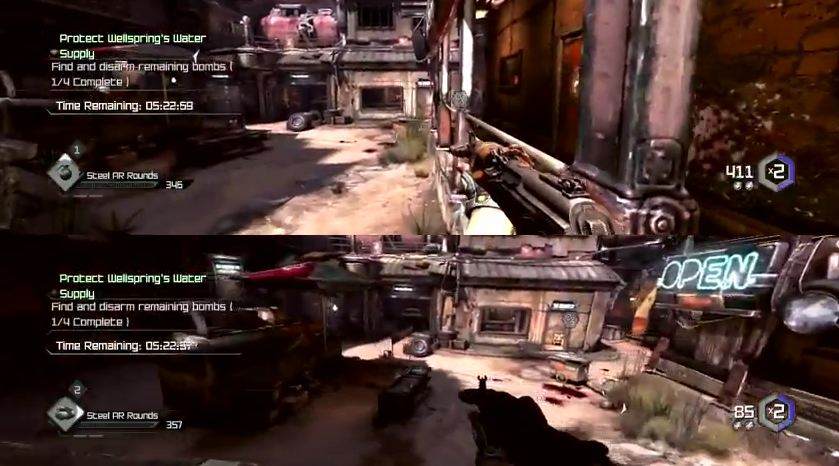 There are standalone missions separate from the main story, that are two player co-op. They can be played on-line, or couch co-op via split screen. These missions tell some of the history of other areas and people, you will encounter in the game. The missions can be played over and over again for high scores, with the levels giving multipliers, and bonus points for headshots, less deaths, time completed, and the like.

Another very fun part of co-op is the buggy races and combat arenas. You can level up, add different weapon and power ups, and customize your vehicle to look cool. This all helps you to further dominate the competition. The combat arena, although not as complex or in depth, is reminiscent of Twisted Metal, and is very fun.

A rush through Rage’s main missions, lasts about 11 hours, however, an easy 40 hours of game play is possible with the side quests and mini-games. The co-op just adds to that even more. With that said, Rage is definitely a great game for your money and I highly recommend it.

This review is based on a retail copy of the PS3 version of Rage provided by ID Software.