Akimi Village was a very interesting experience for me. While I was downloading it I thought this would be lame and boring, but after a couple hours I was pleasantly surprised and even played it to 100% completion and obtained all trophies which I rarely do for PSN titles.

This is a village creator game, themed around a floating island inhabited by a crazy raccoon and Akimis (very short blue guys), the art style and setting is very Japanese and made me interpret this game as a virtual sand garden, where you have to keep things tidy. This is a very relaxing game and a good getaway from all the tension of Dark Souls and the blood and gore from Dead Island (the games I have been playing lately).

This is an unpretentious adventure, with zero challenge and it compels you to take your time and enjoy it. There are no limitations in terms of difficulty, you’re given a quest to revitalize this little island and you can do it for as long as you like. Despite it being fairly easy and simple, some smart thinking should come into play if you want to make a fully functional home for you little blue friends. Like any strategy game you must collect resources to build stuff, the difference though is that those basic components must be transformed into many other different ones through the use of different buildings. Creating a viable non-stop gathering and production of all materials really made me slightly addicted to this game, definitely the main incentive if you’re a perfectionist like me. Those materials are then used to create different structures that combined will make dozens of different buildings. The pacing is completely up to the player, but having a smoothly ran village will certainly speed things up, otherwise you’ll probably waste a lot of time gathering stuff and that would be boring. There is no need to create multiple buildings of the same kind if you place them all well enough, which is kind of cool and shows an interesting level of balance to the game. 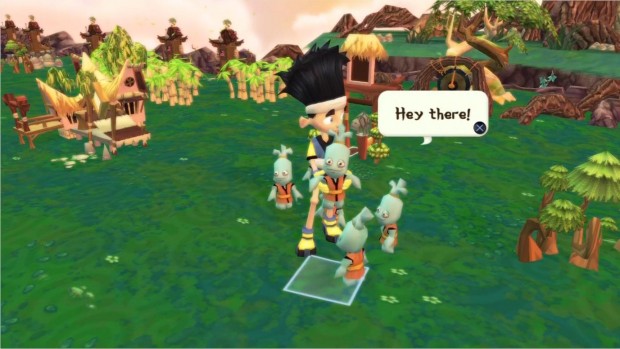 The game is no graphical wonder, but runs smoothly at 1080p and looks better than the average PSN game. Most things about it are built with the Japanese culture in mind, so you can expect to see a lot of Sakura trees, dragons, gates and things of the sort. This certainly made the game feel ever more “zen” to me and fit the overall concept of it perfectly. The colors are very bright with high contrast, as most games focused on a younger audience are, but also has some interesting darker tones and models on “gloomy” areas (places where you can’t build). Most things will glow and sparkle when active or going through some sort of transformation, those effects are also decently done and work well for the theme and purpose of the game, never feeling overdone or getting in the way of everything else.

The soundtrack is very peaceful, though it got repetitive after a couple hours, but since I didn’t play it for longer sessions than that it wouldn’t annoy me when I got back to it. There are few sound effects, and those also get repetitive after a while, but since they’re not continuous possibly it isn’t as bad. Playing with the music on is certainly the way to go though, in case you’re one of those people that like to turn off all sounds and choose your own tunes the immersion and therefore the relaxation will be certainly a lot less effective. 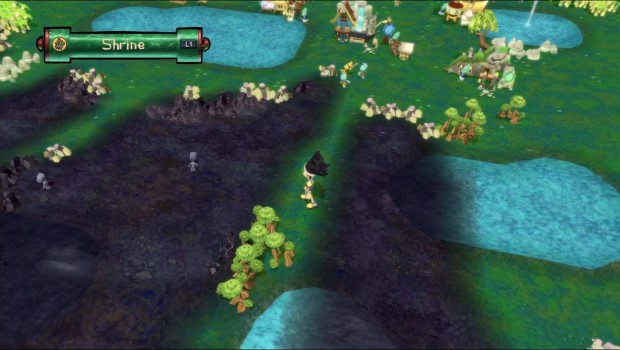 In terms of gameplay Akimi Village functions are very simple, you walk and interact, basically using two buttons, however it’s very easy to access and navigate the menus with blueprints for the buildings as well, which is nice, since it’s a rather important part of the game. The interface for creating new structures and interactions with the environment are also extremely effective and very helpful, making the game a lot more enjoyable than if you had to guess where things go. My only complaint is the same that afflicts most PSN titles I’ve played: camera angles. I seriously don’t understand why a game that allows you to rotate and zoom does not offer the option to actually change it, instead you’re forced to actively hold the camera on the desired position. I also believe the overall ease of navigation through the island is hindered by it, and I’d certainly would like to have seen a top view with more distance. It isn’t a major problem, you’ll get used to it, but it would have been a great feature.

As I have mentioned earlier, the game is fairly addictive and encouraged me to go all the way and get 100% completion and trophies (the gold trophy is “missable”, so watch out!), it took me approximately 7 hours to do so, but unfortunately there’s very little replay value to it if you’ve gotten everything on the first go. You can keep playing after you finish the main “story” if you so desire, but again, this will only interest those who haven’t really put too much effort into it, and chances are if you haven’t you won’t want to do it anyway. 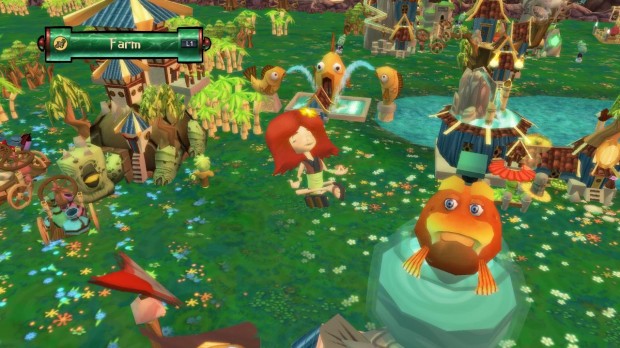 Akimi Village is certainly a fun game and worth purchasing if you’re looking to relax from a stressful day at work. It’s a nice little break for anyone that doesn’t need realistic graphics or blood to entertain yourself. While playing, I had a strange feeling that if EdEN had created a video game, this would be it, don’t ask me why though. As a long time fan of Harvest Moon, I have always loved tidying things up and this reminded me of that, which was nice. Some mechanics will appeal to those who like real time strategy games and others might enjoy the weird sense of humor. This is a unusual game, where the player sets all the rules and challenges and utterly decides how much fun can be had with it, so if you’re up for it, this shall definitely be much appreciated.

This review is based on a retail copy of the PS3 version of Akimi Village provided by NinjaBee.