Your quest is to find the Warlock’s treasure, hidden deep within a dungeon populated with a multitude of terrifying monsters. You will need courage, determination and a fair amount of luck if you are to survive all the traps and battles, and reach your goal…

This PSN-exclusive version of Fighting Fantasy: Warlock of Firetop Mountain features a Tarot Card character generation system and choice of classic dice-rolling or all-new Battle and Luck systems.
With an intuitive Inventory system and Log Book to aid you in your endeavour, this is the perfect way to relive the classic adventure that started it all.

May your Stamina never fail!

I got to review the first minis release in the Fighting Fantasy series, Talisman of Death, so be sure to follow the link to get an idea of how this game series (we WILL get more, right?) works. Once you’re done, be sure to rush back to THIS review so you can see what Warlock of Firetop Mountain is all about.

Fighting Fantasy: Warlock of Firetop Mountain is actually the first book created by Steve Jackson and Ian Livingstone and now we have a chance to enjoy it on our PSP or our PS3. Reading is ALWAYS fun! The wikis of the pedias brings us this information on the series, EXCLUSIVELY tailored for your entertainment:

[spoiler intro=”But Will It Blend Genres?”]
The Fighting Fantasy gamebooks were created by British writers Steve Jackson (not to be confused with the US-based game designer of the same name) and Ian Livingstone, co-founders of Games Workshop, and provide an original twist on traditional fiction in that the reader takes control of the story’s protagonist, being required to make choices that will affect the outcome.

The text does not progress in a linear fashion but rather is divided into a series of numbered sections (usually between 300-400). Beginning at the first section, the reader chooses a non-sequential option (e.g. Section 1 to Section 180) which in turn provides an outcome for the decision and advances the story. The story continues in this fashion, the player continuing to choose other numbered sections, until their character is either stopped/killed or completes the quest.

Fighting Fantasy books typically feature a system whereby the protagonist is randomly assigned scores in three statistics (named Skill, Stamina, and Luck) which, in conjunction with the player rolling a six-sided die, are used to resolve combats and test the protagonist’s success in certain situations. Some titles use additional statistics or additional conflict resolution mechanics. A typical Fighting Fantasy gamebook tasks players with completing a quest, with players then making choices in an attempt to successfully finish the adventure. A successful play of a Fighting Fantasy gamebook usually ends with the player reaching the final numbered section of the book. Many of the titles only featuring one path to the solution, and in some cases this can only be achieved by obtaining various story items.[/spoiler] 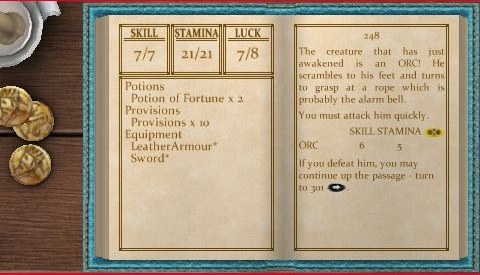 What’s different this time around? Not much really… but not much needed to be changed. The book is blue this time around (it was red for the last book. Trust me, I checked to make sure). My only complaint about Talisman of Death was how the logbook would “reset” every time you went back to the game which meant that if you wanted to check if I you had already visited a particular page or if you’re repeating a previous action you’d have to change the logbook section to that you could browse the pages you’ve already “solved”. Now, the logbook remembers what section you browsed last time which considerably speeds up the whole process. 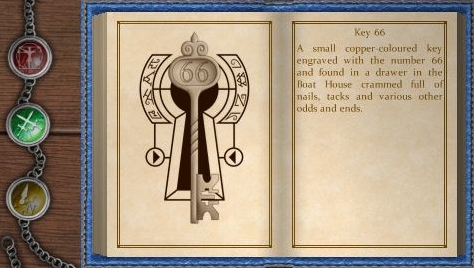 For some reason, the whole game felt faster. Maybe some changes were made to the coding, or maybe I got used to how the game works after playing Talisman of Death for so many hours. But, unlike in the last game in the series which had more of a set path and you didn’t do any backtracking at all, in Warlock of Firetop Mountain you can end up going in circles if you’re not careful. This makes sense since you’re actually working your way through a dungeon and a maze, so maybe it was because of it that I felt a bit of an adrenaline rush every time I found the access to the next section, and that in turn made the game feel faster. Oh well. We might never know!

Fighting Fantasy: The Warlock of Firetop Mountain is a very fun game that brings us another release in the Gamebook series in a tight and well made digital package. There’s still a LOT of Fighting Fantasy games so I hope we get a chance to experience them all in this way. Do hurry and pick up this awesome game today!

[review pros=”Another Fine Entry in the Gamebooks series available for your PS3 and PSP!
Improvements to the Log Book
Very Fun and Addictive” cons=”We want all the other books as well!” score=92]

– A copy of the game was supplied by the publisher for this review.
– Game was completed before writing this review.
– Total amount of time played: 8.5 hours.

This review is based on a retail copy of the PSP version of Fighting Fantasy: The Warlock of Firetop Mountain provided by Laughing Jackal.