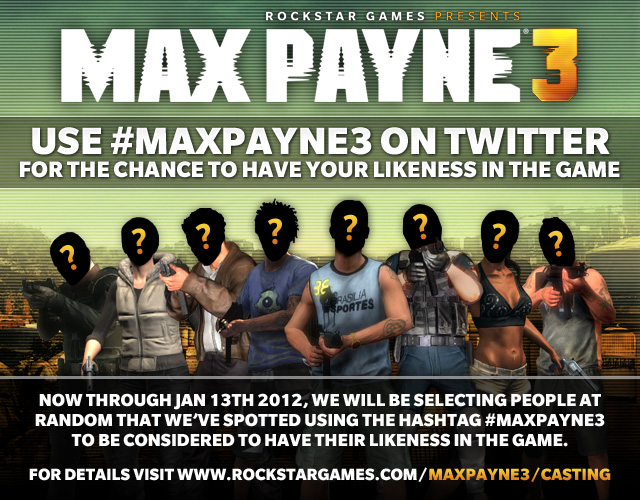 Now through January 13th, 2012, Rockstar is offering their Twitter followers an “opportunity to be immortalized as one of eight Max Payne 3 multiplayer gang characters, just by using the #MaxPayne3 hashtag on Twitter.”

Read below for all the details!

Every week from now until January 13th, we’ll be selecting ten people at random that we’ve spotted using the #MaxPayne3 hashtag. If youâ€™re one of those chosen, we’ll contact you either via tweet or direct message to request a picture of you for consideration. We’ll then pick two people from each group each week (eight people in total) who will have their likeness appear as a multiplayer gang character in our upcoming action shooter Max Payne 3.

Make sure you’re following @RockstarGames on Twitter.
Make sure you’re using the hashtag #MaxPayne3 when you talk about the game.
Keep an eye on your twitter replies and direct messages for us to contact you through January 13th, 2012. All fans that we contact will only have 48 hours to respond.
Visit the casting page for all of the details, and the official rules.