The story takes place in Sumaru City, Japan, population 1,280,000. Its protagonist attends Seven Sisters High School (“Sevens” for short), whose emblem is considered a status symbol even amongst students from other schools.

Soon, though, a rumor that Sevens emblem was actually cursed, and that wearing it would disfigure one’s face, had spread around the city. Even worse, the rumor came true… And it was only the beginning of a string of rumors becoming reality, one after another…

Before long, the protagonist discover the power to summon another side of them called “Personas”, which they use to investigate the strange incidents around the city, all while facing their own personal demons as well.

Time is once again on the march…

Personas are the manifestation of power from one’s other selves lurking within them. These Personas with otherworldly abilities and appearances of gods from worldwide mythos are drawn from the unconsciousness of of Persona-users to appear in the real world, lending their power to the wielder. The “you” that others recognize is only one of the countless selves that exist, and of these innumerable selves, there are those with the compassion of gods, the cruelty of demons, and even those with the capacity to wield swords or guns. Personas are no more or less than “another you”.

Up until this point the game was a Japan-only release (12 years had to pass for it to see a release outside of that wonderful island). We DID get the second half of Persona 2 (Eternal Punishment), and back in the day we had no idea we were missing out on a huge part of the picture. How has this game aged during all this time? Let’s find out!

There’s a lot of great anime cut scenes in all the game, as you’ll immediately notice right after booting up the game. Animated cutscenes are always a nice extra, and you can watch them in original, medium or widescreen format. Isn’t technology wonderful? There’s also an updated and remixed soundtrack you can choose in case you don’t like the original one. All in all, it’s great music that truly brings this experience to life. The remixed music really shines. The original tracks were taken in for a tune-up and all its intricate elements and nuisances really pop (there’s a limited edition available at retail comes with a soundtrack CD so track down that one!). You also have the option of installing a 200 MB+ portion of the game to the memory stick to reduce load times. Since there’s A LOT of random battles (oh, happy days!) and the install time is only 1-5 minutes at most…the install is time well spent.

Before getting started, players have the option of picking between easy, normal or hard difficulty. The higher the difficulty, the harder it will be to defeat the many, many, maaaaany demon’s you’ll run into. But Easy isn’t really THAT easy, as it will still require the player to carefully plan their approach to every fight. Unless they want to die a LOT. This isn’t a simple game, but it is just what we needed.

Controls are easy to understand. You can use the analog stick or the D pad to move around. L and R are used to move the camera around (very important since most of the time the camera plays tricks on you and blocks NPCs or items on purpose). X confirms choices and O cancels them. Oh, and the triangle button activates the auto-battle feature during fights, which takes into consideration the last set of actions performed by your party and replicates them until you cancel out of it.

You can move around a Town Map to select the next location to visit. You can even talk to people (represented by green arrows) in the town map to obtain new info. You can travel between different zones by exiting the world map and selecting another area you’ve already opened up in the new menu that will pop out.

Now, with that out of the way, let’s take a moment to meet our party of intrepid youngsters that will save the world this time around: An 18-year-old young man attending Seven Sisters High. He is tall, handsome, and has a mature, cool demeanor which has won him the admiration of female and male classmates alike. Heâ€™s a loner who does his
best to avoid getting involved with anyone.

A 17-year-old girl nicknamed â€œGinkoâ€ who also attends Seven Sisters High. She has beautiful blonde hair, blue eyes, and a figure thatâ€™s the envy of other girls her age. Because she was born to parents who were naturalized as Japanese citizens, she looks Caucasian, but she speaks fluent Japanese. 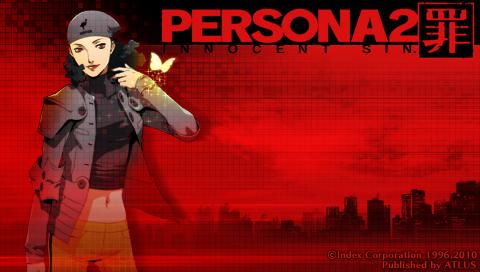 An active twenty-year-old student at vocational school for photography. Sheâ€™s grown out her hair and settled down a little since her days at St. Hermelin High. Her goal is to become a professional
photographer and sheâ€™s now working as an apprentice to a freelancer. 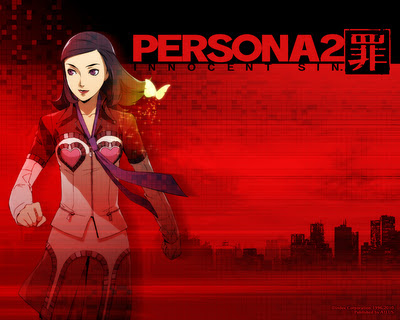 A 23-year-old reporter for a teen magazine. Sheâ€™s a beautiful, cheerful woman who naturally draws others
to her with her considerateness and affable nature.

A 16-year-old and second-year at Kasugayama High, less flatteringly known as Cuss High, who refers to himself as â€œMichel.â€ He is the Boss of a gang of delinquents at Cuss High and also front man in his band.
He tends to take what people say too personally, is easily swayed, and is often a bit too taken with himself. A 17-year old young man with slender, feminine looks. He transfered to Kasugayama High, but hasn’t been seen attending classes for some time. He loves flowers and always wears fresh blossoms such as an iris or iceland poppy.

As usual, you can change the name of the characters in your party. You can even decide what nickname to give them. Me? I just leave then as is since it’s how the story was written. No need to add my own name to the mix as I’m pretty sure I’ll remember I’m the one that is playing the game.

Want to make something become a reality? Spread a rumor about it and see how it goes! First one is free (mmm, where have we heard that before?) but the others will cost you dearly. Also, you must first HEAR a rumor straight from a rumormonger’s mouth before you can pay the Head of the Detective Agency to start the rumor machine. Rumors play a big part in our adventure, even more so when we remember that this whole thing started because of one single rumor. You’ll be able to decide the type of items sold at each store, how awesome a prize you can get from the lottery, open up new areas to progress the story, etc. Rumors are what makes the world go round!

Your first shopping experience will be at the Kameya Alley. Each store has an icon next to their name and this can help you identify at first glance what each one of them deals in. A sword means its a weapon store. A jacket identifies an armor store. A fork and knife means its a restaurant or a food store. A little silhouetto of a man (Scaramouche, scaramouche, will you do the fandango?) is there to let you know there’s gossip to be heard, learned or spread. A red cross sign is for places you can heal your wounds at (HP and SP restore and all status ailments dissapear for the whole party). The characters in your party get hungry from time to time. Buying something to eat will give them a temporary boost to one of their stats which will last until they’re hungry again. Gotta try them all! And you must also remember that some armor is gender specific (a hairpin, for example, is female-only) before you go purchase crazy, and start spending all of your hard-earned money. And yes, hard-earned is definitely the way to describe this.

After you complete one of the demonic battles you’ll wage against… demons that are demonic, you’ll be rewarded with experience points and money you can use to upgrade your equipment or for items that can help you in battle. The currency is expressed in Yen and, I don’t know about you, but for me, a Japanese game that uses Y as the in game currency is just crazy and completely goes against the atmosphere and feeling of this adventure.

A very intersting element in Persona 2 is the Pacts you can make with Demon’s. You start things of by making Contact (talk) with them while in a fight (and, sometimes, the Demon’s are the ones that initiate things) to try and convince them to give you items, info, tarot cards, money or to heal you. They have for attributes (eager, happy, scared and angry) that increase from each action you select once contact has started (Tetsuya can, for example, do impressions), OR from the answer you give a demon to the question they’ve presented to you. Get them to full eager or happy and they might ask you if you want to enter into a pact… and this is how you get better items, money and other extras from them once you find them again in battle AND fill their eager or happy metes during the new encounter. Should you make them angry they will break the pact (if one existed) and attack you.

Tarot Cards, demons, and Personas all have an associated Arcana. A Personaâ€™s Arcana indicates which Arcana of Tarot Cards is necessary to summon it. Negotiating with demons can earn you Tarot Cards of the same Arcana that the demon belongs to. The higher a demonâ€™s level, the more Tarot Cards youâ€™ll receive through negotiation with it. More cards are necessary to summon high-level Personas. Negotiate with strong demons to quickly gather enough cards to summon the better Personas.

As is always the case with old-school RPGs, grinding is not an option, it IS a requirement. I grew up with random fight, turn-based RPGs back in the day and I’m very happy to finally get a chance to play Innocent Sin. I own Persona 3, P3 FES and 4 on PS2 as well as the first Persona that was also released on PSP. Thus, I was only missing Innocent Sin and Eternal Punishment (the second released in the Persona 2 world) to have a complete set. Grinding for money and experience, while also increasing my Personas, is just part of the fun experience you can enjoy in this game.

Persona 2 has been a long time coming, and we should be happy about finally having it officially released over here. A solid combat system, the crazy but interesting story, the remixed soundtrack, the great 16:9 cutscenes and overall presentation, all contribute to make this a very welcome addition to the still growing number library of the PSP. Any Persona fan should run to buy this right now to tell Atlus that we want more Persona games!

This review is based on a retail copy of the PSP version of Persona 2 – Innocent Sin provided by Atlus.