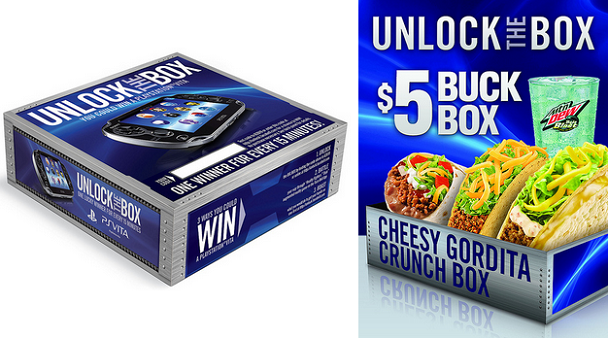 Mark your calenders for January 26th folks, as the good people of Taco Bell will give you a chance to win PS Vita systems before they even go on sale in stores! According to the official PlayStation blog, Taco Bell will offer you 3 ways to win a PlayStation Vita system every 15 minutes until the 11th of March. Winners will get a prize pack that will include a PS Vita 3G/Wi-Fi System, one copy of Little Deviants, a 4GB PS Vita memory card and a choice of one of the following games: ModNation Racers: Road Trip, MLB 12 The Show, LittleBigPlanet.

Here is how you win:

BATTLE: Download Taco Bellâ€™s new mobile app to check out the exclusively designed Reality Fighters Dojo game where you can â€œbattleâ€ your friends to win a PS Vita.

BOAST: Taco Bellâ€™s online contest will encourage you to submit a photo or video â€œboastingâ€ about what youâ€™re willing to do for a PS Vita. Submissions will then go into an online gallery where you and your peers can vote for the winners â€“ it could be you!