Welcome to the abandoned and (reportedly) demolished halls of Heavenly Host Elementary School, where vengeful spirits dwell and the fires of corporeal existence are repeatedly and mercilessly snuffed. We hope you enjoy the tour, as it’s not about to end anytime soon. It may even last an eternity…

At this accursed school, a series of incidents occurred in which, ultimately, four students were kidnapped… and murdered. And though this ocurred 30 years ago, the corpse party still continues to this very day.

Now the site if a perfectly ordinary high school, one unlucky class representative with a penchant for telling ghost stories makes the mistake of invoking a forbidden charm know as “Sachiko Ever After”, a charm that unknowlingly serves as the invitation to another space — a shifting, almost sentient echo of the long-closed school wherein these horrific mutilations occurred so long ago.

And once you’ve been invited to this party, you have no choice but to attend.

Willingly or no, all who find themselves in the dilapidated halls of Heavenly Host must persevere, fort their only companions along the way are the mournful spirits of the dead and forgotten… along with a few who consider themselves the very arbiters of lie and death. Will you remain a guest here forevermore? Or will you have the power to defy the saddest and strongest fate of all?

Corpse Party is not your average scary game. It does have some strong images, and the content is sure to make you feel a little woozy, but there are no cheap scares in some dark corridors here. Instead, the excellent story is what sets the tone for the whole thing. At the very start of the game, a tale is told with just a handful of images lit by candlelight and from there, things just get spookier. Just watching the first 30 minutes of the game will give you nightmares about those damned children. Yes my friends, even the bravest of us will squeal at the sight of this game. 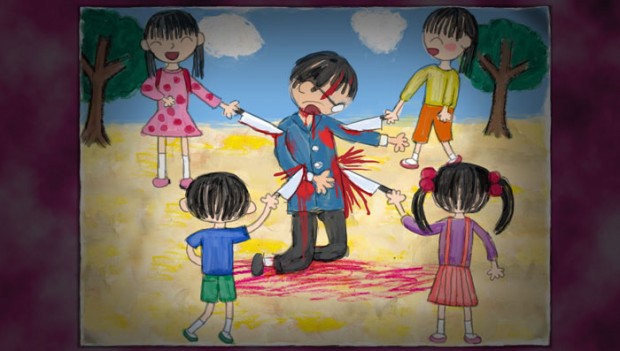 This game was actually created in RPG Maker several years ago, and it was later ported to the PSP last year. Here’s some insight into this, directly from XSEEED Games:

Believe it or not, Corpse Party has actually existed since 1996!

The very first appearance of Corpse Party was as an independently-developed freeware game for the popular Japanese NEC PC-9800 series of computers, created by a small software startup who call themselves “Team GrisGris.” The title was put together using the popular game creation software RPG Maker (specifically, a PC98 adaption of it called RPG Tsukuuru Dante98), and billed itself as a no-holds-barred horror adventure reminiscent of Japanese 8- and 16-bit classics such as Capcom’s Sweet Home and Human’s Clock Tower.

In 2008, perhaps spurred by the runaway success of similarly-themed horror titles like Higurashi: When They Cry, Team GrisGris released a Windows-based reimagining of their original opus titled Corpse Party: BloodCovered. This was not a mere port, but an upgrade in every sense: the graphics, the music, the gameplay and even the story itself were all changed, improved and expanded upon (and the initially unnamed side characters who later starred in Corpse Party Zero had their names retroactively applied to them, as a nod to the dedicated fans who kept the series alive during Team GrisGris’ long hiatus). The title was split into five chapters which were sold episodically at conventions, fan events and through an online store. This updated remake was also ported to cell phones, allowing Japanese gamers to horrify themselves on the go.

XSEED Games fell in love with Corpse Party: BloodCovered: …Repeated Fear just after Halloween 2010, and negotiated a license with 5pb to release it in the English-speaking world. Since no other version of the game has ever been officially published outside of Japan, we felt it prudent to drop the dual subtitles and release this game under the name that started it all: Corpse Party. Short, simple and catchy! It is, after all, the beginning of the story. 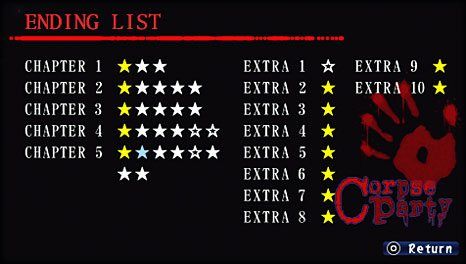 While it was a full PSP release in Japan, itâ€™s a PSN-only release over here. Honestly though, Iâ€™m just glad we got the game at all. It has some pretty meaty content with 5 main chapters to play and up to 10 extra ones that can be unlocked depending on your actions (you gotta to love multiple endings!). Each extra chapter is a small insight into other characters and their journey from here to the other side, and take about 1-5 minutes each at most. Bringing new information and perspective to the whole story is what they’re all about. Some of them you donâ€™t even play, since you just read about the interactions and conversations.

In this unusual experience youâ€™ll do a LOT of reading, but we embrace that change with open arms.
Itâ€™s good to actually read something instead of button mashing my way across yet another action game. Every line of dialogue is voiced (in Japanese) with English subtitles added for those of us that can’t really tell one word from the other. 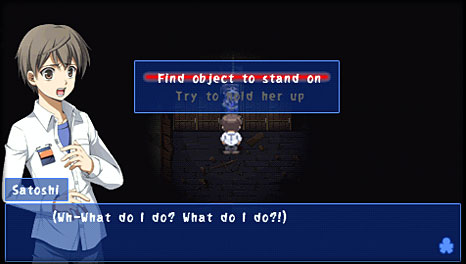 The gameplay is simple, you use the D-Pad to move (analog doesnâ€™t work), use the triangle button to open the menu, and use X to interact with everything else. Since itâ€™s a digital release, loading times are down to a minimum and wonâ€™t break your experience. There is a lot of revisiting the same spaces over and over, which might sound boring, but since youâ€™re actually trapped inside a school, but each group is in a different dimensions, and every time you revisit places they change! How you interact with the (dead) people is what defines your actions and the story outcome. It isnâ€™t about surviving, but rather about choosing how youâ€™ll die. No one is safe, and all will eventually meet their end in this macabre journey. Or is there still a small ray of hope in all this twisted and macabre darkness?

You’ll find the decaying remains of those that were trapped before you, and that could never find their way home. You can collect their name tags to add their information to your list. You’ll be surprised to learn how many have already seen their flame disappear, suffocated by this crazy place that slowly eats away at your mind and your soul.

Sound plays a huge part in this game. Be sure to use your headphones and set volume as high as possible. Playing at 12 am with the lights off will also get you in the right mindset, though nightmares may wake you up in the middle of the night. You see, imagination is a veeeeery powerful thing. Not being able to see what is going on, but being told about it and listening to screams, blood splatter, breaking glassâ€¦ that is certain to mess with your head. Graphics are simple (16-bit goodness!) and the illustrative images that pop out every once in a while are horror manga at its prime.

Corpse Party is a must buy for every PSP owner. Visual Novels are hard to find, and when we’re given one of such high quality as Corpse Party, it is our duty to support them by buying ASAP. You’ll play for 15+ hours in order to see everything the game has to offer which, for a $19.99, is really a great value. XSEED Games wants us to join the party, and the dead want to lead us into the afterlife… 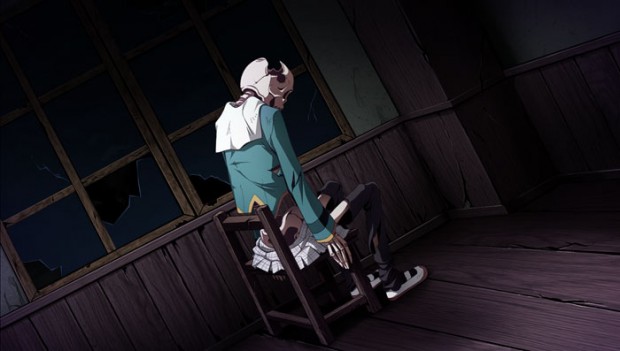 This review is based on a copy of Corpse Party provided by XSEED Games. 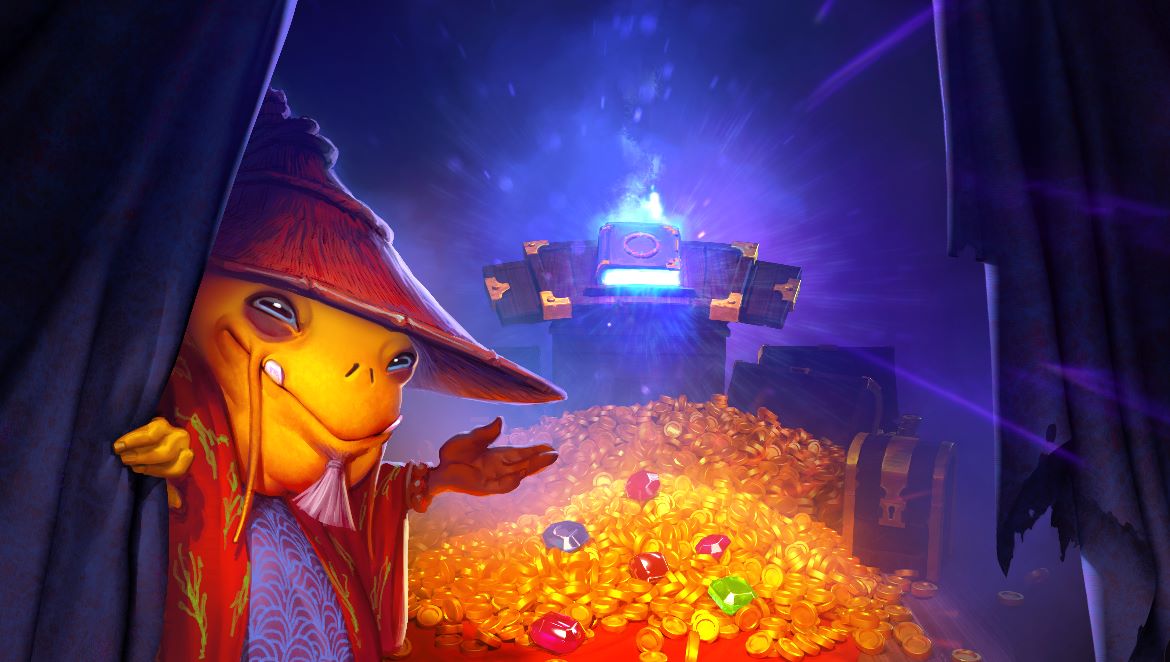 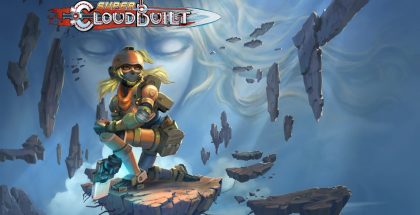