The three main characters in Trine 2 are icons in the gaming industry. They represent to us, gamers, the mysterious dungeons, the prized weapon at the end of a painful quest, and above all, the classic old school RPG that we all adore. However, Trine 2 is NOT an RPG. It’s best described as a side-scrolling action adventure/puzzler/platformer/ … OK, so Trine 2 might not have a definitive nature, or a remarkable story, but I’ll tell you what it does have: lots of charm, sharp controls, and some of the most beautiful visuals Iâ€™ve seen. Surprisingly, that combination works! 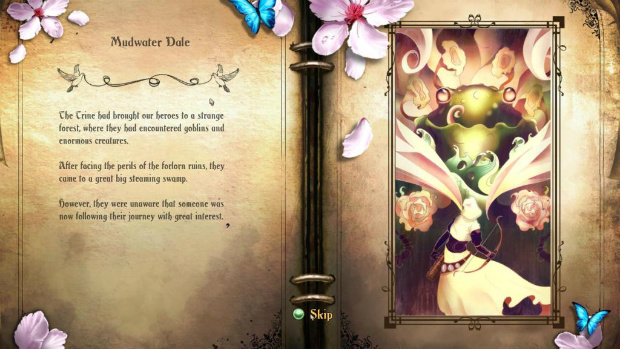 Regardless of the weak story, storytelling in Trine 2 is surprisingly satisfying!

Trine 2 tells the story of 3 companions’ adventure through an ordinary tale to save a princess. The iconic trio (Amadeus the wizard, Zoya the thief, and Pontius the knight), return to the magical forests to fight goblins and solve more puzzles, while discovering their path and unveiling the secrets of the Trine 2 universe. You will uncover more of the story through poems found in some of the treasure chests distributed evenly through-out the game. While I found the poems a bet helpful to storytelling, I was a bit disappointed after spending a good amount of time reaching my first chest.

You see, the chests in the first Trine were more rewarding, as you can acquire some cool items (armors, weapons …etc) to aid you in your battles. While the story is fairly simple, it has nothing new to offer in general and I found it was merely put for the purpose of transitioning between levels. 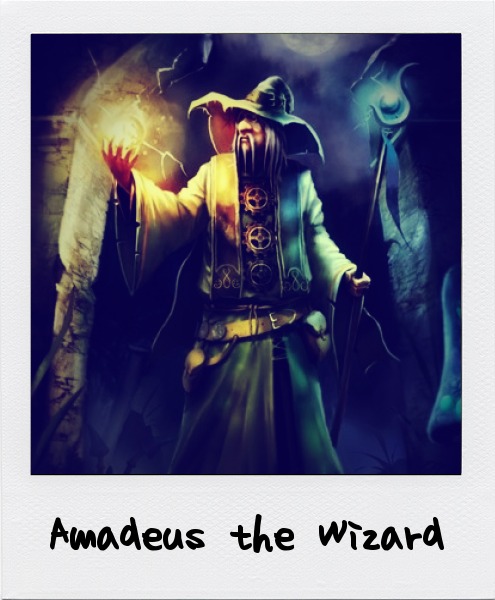 Despite his ongoing research for finally learning the Fireball spell, the Wizard’s talent is for conjuring peculiar boxes, and occasionally even planks. He can also levitate small inanimate objects. Amadeus is married to a lady by the name of Margaret. They have three children, all of whom know the Fireball spell.
.
.
. 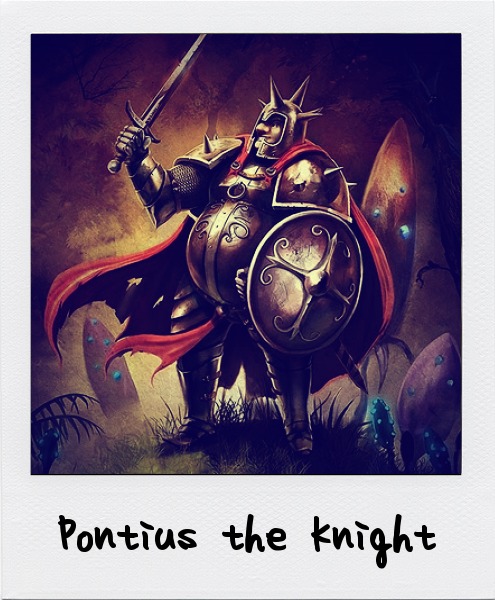 The Knight is an eager champion of the kingdom, the protector of the common man with a great sense of justice. Armed with his sword, his shield and the powerful Storm Hammer, he’s a formidable fighter. Pontius’s great weakness is food. This shows around his waist.
.
.
.
. 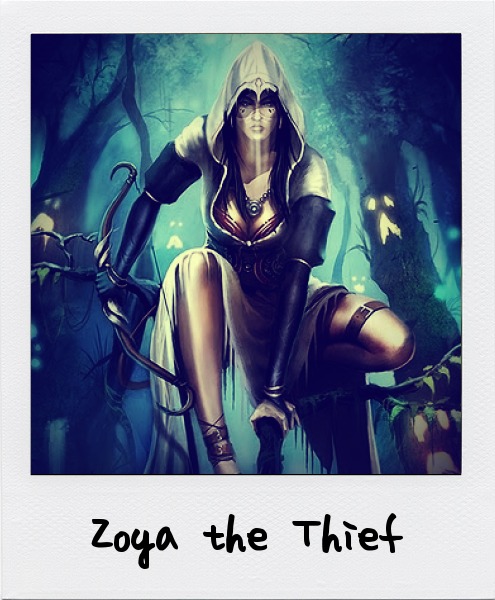 The Thief makes her way up to rooftops and over walls with her trusty grappling hook. Zoya is not so concerned about family or duty, but she is content to be a hero of the Trine, for she loves adventure. Zoya’s love for treasure, however, often leads her astray.
.
.
.
. 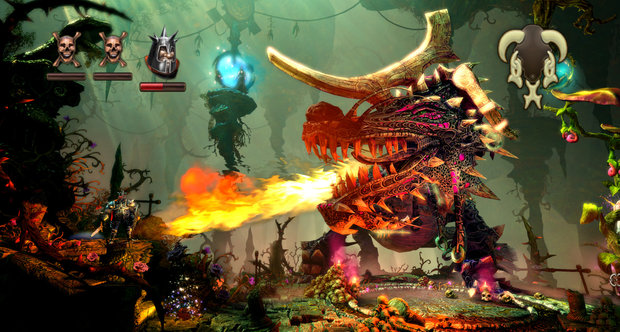 While Trine 2 lacks in the story department, it still packs some of the most beautiful visuals and outstanding game mechanics ever created for a platformer. Each of the main characters has a set of unique abilities and you can switch between characters easily during the game by simply pressing the R1, or R2 buttons on your Dualshock 3 controller.

The wizard is the most important character when it comes down to solving puzzles especially if you are running solo. He can create boxes and planks (can be upgraded up to 4 boxes on screen), move certain objects around (including goblins), which was indeed useful and um .. fun, giving the fact that the wizard was proven completely useless during combat in the first game.

The knight is the most useful character during combat, as you can use either your sword and shield or hammer to fight enemies, bash certain walls, and deflect incoming projectiles. As for the thief, well .. I found myself using the thief 50% of the time due to her unique ability of grappling onto wooden surfaces, which was proven useful both in combat and in solving puzzles. The thief can also strike with her icy bow (which can be upgraded to fire arrows), simply by using the right analog stick.

Each of the characters have their own life meter. If a character runs out of life, he will die and you will be forced to switch to one of the other main characters. Life meters will refill instantly once a checkpoint is reached. Throughout your journey, you will also find magical vials. If you collect 50 of these, you will receive a skill point, which can be used to purchase a single upgrade for one of your characters, keeping in mind that some of the upgrades will require more than 1 skill point.

The skill tree in Trine 2

Despite the small improvements made to combat, fighting scenes are barely challenging. The game keeps throwing enemies at you with the intention of slowing your puzzle solving process, which makes it feel a bit forceful, rather boring, and relatively unnecessary. Enemy AI should have been managed differently, with regards to quality over quantity. Although, I have to point out that I’ve enjoyed some of the combat scenery simply based on the smooth responsiveness of the controls.

Trine 2 also offers a unique prospective on the way you approach puzzles, as you are given the complete freedom to use all the tools you have to reach treasure chests, get to higher ground, and/or move to the next stage. Each of the three main characters will offer a different approach. Sometimes you will find yourself using a combination of all three. I’ve also found that some areas are inaccessible without the help of a partner, which will force you to either get online, or call in a friend for help. This makes the whole cooperative experience worth checking and adds a bit of a replay value to the campaign.

Aside from the upgraded graphics engine, the most distinguished new feature in Trine 2 is the new online cooperative support. You can play with up to 2 other players both locally and/or online. I was able to test this new feature with 3 players online in a quick match. How this works is fairly simple: a player can host a game, keeping in mind that the skill tree (unlockable perks) is based on the hosting player’s progress and only the host can allocate skill points, you assume the role of one of the three main character and if you die, your friends can revive you at the next checkpoint.

Having more than one friend helps A LOT in terms of solving some of the inaccessible puzzles in the singleplayer mode and defeating gigantic bosses. I found it rather entertaining to brainstorm some puzzle solving ideas with people I met online. The game will force you to communicate with your partners rather than just running around and killing stuff. As much as I’ve liked the idea of online co-op, I’ve also found it unequally satisfying, merely for the fact that only the host’s characters will gain experience, rather than you all achieve equal progress.

Regardless of the limited story, Trine 2 undeniable charm, soothing soundtrack and outstanding visual design will make for an unforgettable experience through the mind of developer Frozenbyte. The added feature of online co-op brings something extra to the table and defy the way you approach puzzles and fight enemies. If you are looking for a simple entertaining and casual co-op adventure, Trine 2 will deliver.

Trine 2 is developed by Frozenbyte and published by Atlus
Price on PSN is $14.99

This review is based on a copy of the PS3 version of Trine 2 provided by Oly (thanks mate). Also, a demo is currently available on the PlayStation Network, so make sure you check that out.

2012: The Year Of The Fighters Preview