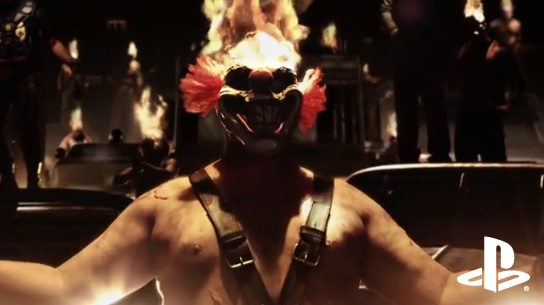 The highly anticipated Twisted Metal PS3 lands on PSN today just in time for the community event being held on their facebook page, which can be found here.They have some nice prizes for the winners. Read on below.

Winner of the Twisted Metal Multiplayer Tournament will receive a Twisted Metal laser-etched PS3, and special prizes will be given away to participants and the top 10 players. David Jaffe and company will also be handing out special Twisted Metal items (exclusive to this event!) all night long. Youâ€™ll need to be present to win!

David Jaffe has just jumped in on some of the community’s questions over at Sony.

Will Twisted Metal feature a Party System for easy play with friends?

100%! The new Twisted Metal supports Party and Clan systems allowing players to easily jump into ranked and unranked matches together. The party system was key, not just because itâ€™s a staple for online games, but because we heard from so many players who came up playing this game with friends (be it as little kids, or college students) and now their crew have scattered across the globe and they were asking us for a fast, easy way to jump into games with friends so they could relive some of those fun memories (and ideally make a lot more new ones)!

Split screen local co-op has been a staple of the series since TM2 and itâ€™s back and better than ever. The campaign that you and a buddy can go through together is more varied than any other TM campaign weâ€™ve done. And the other split screen modes- for 2 to 4 players on the same tv- allow for free for all and team games with lots of host options for players so they can tweak and adjust the game so it always says fresh. In 2 player split the players have 30+ levels to choose from. In 3 and 4 player split, players can choose from 10 battlegrounds.

Is there any gameplay relevance related to the pedestrians in the environments, mechanics and trophies?

Yes to all three questions :). A good example: in the level called BLACK ROCK STADIUM- which is this â€˜hi tech meat grinder-meets-Roman Gladiator Colosseumâ€™ players can park their vehicles on pressure plates. Sitting on these plates long enough causes audience members to get ejected from the stands. Each audience member that is ejected is wearing one of two kinds of vests: a vest with a cross on it and a vest with a question mark. Hitting cross vested peds yields health. Hitting mystery peds yields a random weapon pick up.
If you kill an enemy, the drive and gunner eject from the explosion and their burning bodies go running around in terror. After a few seconds they die, but if you can hit the gunner before he dies, you get a random weapon. If you hit the driver before he dies, you get a little extra health.

Which characters are some of the Twisted Metal teamâ€™s other favorites?

All of the human characters in the new Twisted made it in mainly because they represent the teamâ€™s favorite from a 50+ roster of characters that live in the Twisted Metal universe. So besides Tooth, weâ€™re all big fans of Calypso, Mr. Grimm, Dollface, and Preacher. We also tend to dig No Face and Minion. As for vehicles, we love the cast of vehicles in the new Twisted and thatâ€™s a big reason they made the cut. We do miss some of our old friends however, such as Thumper, Pit Viper, Yellow Jacket, Twisted, and Mr. Slam.

[Review] Lord of the Rings : War in the North