Jurassic Park, the groundbreaking Steven Spielberg film series has long been a franchise that our team at Telltale wanted to tackle. As a property Jurassic Park is a story of survival and interpersonal relationships under extreme circumstance, something that traditional game genres simply are not built to address authentically.

Our designers truly pushed our traditional design boundaries further than ever before to create a game to focus the experience on this story of survival. With a design laser focused to follow the franchise tenants like no other film based game has ever done itâ€™s a format weâ€™ve labeled as a cinematic adventure. A design built not for the hardcore gamer but rather for the hardcore Jurassic Park fan, one that has always dreamed of spending some time on Isla Nublar. The final product has been polarizing with traditional game critics, but one thing that just about everyone can agree on is Jurassic Park: The Game delivers on our original vision – an authentic and cinematic Jurassic Park experience.

Let’s get this out of the way RIGHT NOW: Jurassic Park: The Game is NOT a point and click adventure. It doesn’t play like Sam and Max, Back to the Future, Puzzle Agent or any other of the Telltale Games releases we’ve enjoyed in the past.

Still here? Good. Let me tell you about how you control this game so you can get a better understanding of how this interactive adventure works. You could describe Jurassic Park: The Game as a Quick Time Event (QTE) extravaganza, since said interactions are available during most of the game, and they’re how you control each of the characters that you interact with, you better love them. Sure QTE are not for everyone, but in this case they do work as intended. 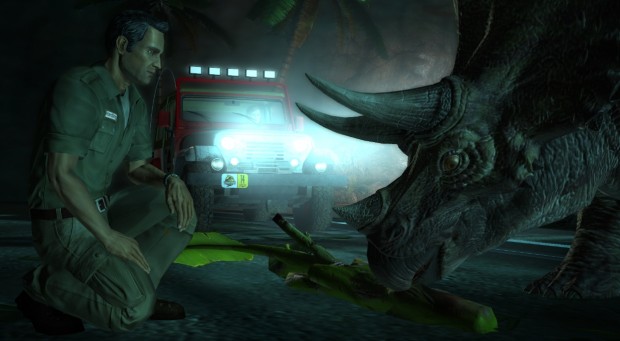 While viewing the game, you can interact by pressing the prompt button that will appear in the screen (as is the case during the opening sequence where your character is running away from some deadly creatures) or that you’ll find by moving around the camera view during those moments on which you’re not in immediate danger. You use the left analog stick during said moments in order to adjust the view, which could also trigger new buttons that might be pressed to interact with objects, persons or dinosaurs. The right analog stick is also used in here to perform some motion actions that translate from controller to screen, and that feel natural and make the gameplay flow from scene to scene. 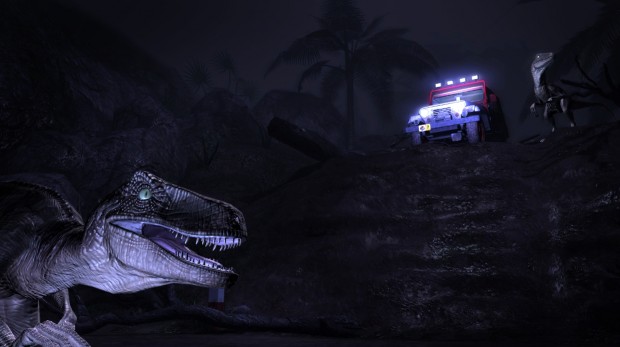 There’s a nice graphical evolution here when compared to Back to the Future: The Game, as we can easily spot a better use for shadows and lighting in order to get the most out of each of the 12 scenarios you’ll be playing in this first Episode. Sure, there’s a small hiccup here and there in the animations, but nothing that can ruin your experience as a whole.

The story for Jurassic Park: The Game Episode 1 takes place at Isla Nublar during the events we witness during the first movie (based on the original 1990 book by Michael Crichton). We will visit Isla Nublar while playing as several characters that find themselves trapped in this amazing slice from the past on the night that the power goes out and the dinosaurs come out to play. 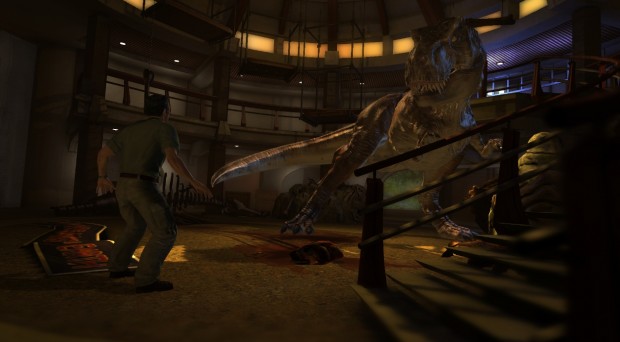 You’re graded in real time on each scenario on how well you’re doing (Gold, Silver, Bronze), and not dying during any of the action sequences will help you obtain a trophy after completing the episode. Speaking of which, you can replay scenarios (which is great news for us trophy hunters) in case you didn’t nail a sequence because, remember, you must really pay attention and be on alert at all times. This is trial-and-error gameplay at its finest, and the 12 scenarios available in Episode 1 will put you to the test.

Jurassic Park: The Game is a great new adventure from Telltale Games, that brings back a great series for a 21st century audience. It is a very tense game that has us glued to our screens from start to finish, and you do feel like you’re trapped in an island full of dangerous dinosaurs that can end your existence in an instant.

This review is based on a copy of Jurassic Park: The Game provided by Telltale Games.