We Introduce To You, 4Gamers

Before I begin, I’d just like to briefly introduce 4Gamers – a UK based PlayStation Approved accessory brand.

4Gamers have been developing quality console accessories for over 6 years, and have since established themselves as a quality brand whose products can be found in every gaming establishment, supermarkets and online stores within the UK.

4Gamers are an Official PlayStation Approved Accessory developer, so you can have the peace of mind that you are buying a product which has been carefully designed and pieced together, and has met the seal of approval from the big cheeses within the Sony corporation.

Their products range from affordable PS3 and the more recent PS Vita cases to headsets and packaged kits which appeal to the more prominent gamer. Currently their products are not available in the US, however this is about to change very soon!

I was recently invited to the 4Gamers UKHQ to see their products first hand, and I’m still wondering how I can share with you everything that I saw and had the opportunity to play with.

I met with Tony Walton, Product Development Manager for 4Gamers – the genius behind the product design. We sat down in the main board room, where the walls were covered in numerous accessories they’ve developed over the years. After a brief introduction, Tony advised me that I was about to see products which currently are in the public domain, and some which have only just been approved by Sony themselves and haven’t yet been revealed to the outside world.

Although I would love to share with you everything that was presented to me, today I’m going to focus on one particular piece of kit which I feel is the must-have kit for any PS3 gamer, new or old.

so, without delay – let me present to you, the COMM-PLAY Performance Gaming Kit! 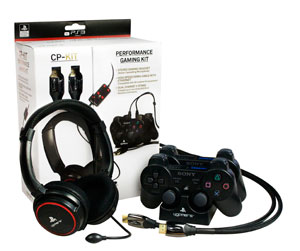 What’s Included In The Box

Presented in a very sleek box, the package includes the following products:

The headset looks VERY sleek – it sports a leather strap across the headband, it’s extremely light, comes packed with some nice and tidy cables – and the major plus for me, a noise cancelling microphone. 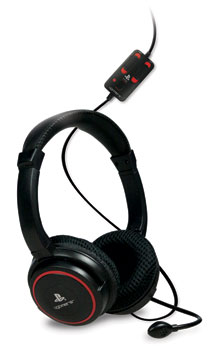 Before I go into specifics I’d like to mention that I currently own a set of Turtle Beach P11’s – and I couldn’t help myself but compare the 4Gamers’ headset to the P11’s – due to both being very similarly priced.

The first and most obvious difference I noticed between both headsets were the volume controls. Whilst the P11’s controls aren’t all that bad, the 4Gamers’ headset’s controls just look and feel far superior – with the solid sliders giving you more control over the volume levels. The headset’s controls were very robust, and had a solid feel to them.

Whilst playing with the P11’s controls, I felt like I’m 8 years old again, back in the 80’s playing around with the volume control dial on my Sony cassette player/Walkman. We’re in the 21st Century and to be honest, we should be moving away from circular dials regardless of the feature it controls.

The other noticeable difference was the shape of the earcups. The P11’s consists of oval/eggshaped earcups, whilst the 4Gamers’ headset consists of round earcups – with both headset’s cups nicely padded, making them very comfortable to wear.

Next up was the noise cancelling microphone offered by 4Gamers. This is a mega plus point, whereas my P11s unfortunately do not offer a NC mic. If you’re wondering what noise cancelling is all about, here’s a quickie from the Wiki:

“A noise-canceling microphone is a microphone designed to filter out ambient noise from the desired sound, especially useful in noisy environments.”

The mics on both headsets are different in length – with the 4Gamers’ mic being shorter. When testing the 4Gamers headset via an online session of Battlefield, although I hadn’t told my friends I was donning a different headset, they had obviously noticed the difference by telling me I actually sound much clearer.

Both headsets sport a metal adjustable arm on the mic, making it nice and sturdy and ensure the mic doesn’t drop from it’s adjusted position.

How often do you feel that there’s just too much cabling between you, your headset and your PS3? I get this all the time with my P11s. Although the P11s offer a generous 3.7m of cabling, it quite annoys me that I have to interconnect quite a few cables to then connect upto my PS3 – making the floorspace in front of me look like a mess. OK – so sue me, I’m complaining about the wiring in front of me.

Let me put it this way, I have my P11 headset, connect the headset to the USB slot in your PS3 and then to the audio splitter cable. You then connect the audio splitter cable to your PS3 A/V cable which is then plugged into the back of the PS3. So, all in all you have to connect multiple cables each time you want to use your headset – it can be a pain when you’re trying to get online quickly.

I thought this was one of the better features of the 4Gamers’ headset. No extra cables to interconnect, the headset had one 4m cable, consisting of a USB and A/V plug – which were adequately spaced out and seperated, which. All that was required was to plug the headset into your PS3 and got on with your gaming. Easy peasy!

Finally, the most important feature of any headset – the audio quality. I must say my ears have been put through quite a lot over the years and although this is the case I can confidently say they are still in mint condition. Although I tend to tune out of my wife’s nagging – that’s a special skill that doesn’t take long to learn, my ears were picking up all the little sounds you would normally miss when you’re playing your games on your 42″ TV!

I noticed very little difference in terms of audio quality. The P11’s had a slightly higher level of bass, but this for me wasn’t the dealbreaker. The 4Gamers’ headset on the other hand, was crystal clear! I was exceptionally happy with the sound quality generated by the 4Gamers headset. Once I was involved in my game, I didn’t really care about the bass levels – I was more bothered about whether I could hear opposition creeping up behind me, or the tank taking me out from my right hand side – and it didn’t let me down in that department. 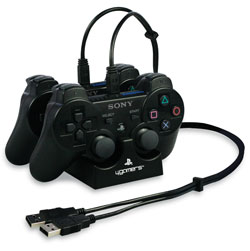 I’ve occasionally found myself with 2 USB cables just dangling out of my PS3 with 2 gamepads lying in the middle of the room, charging whilst my wife gets her daily dose of Come Dine With Me. For folks across the Atlantic, Come Dine With Me is a reality show where 4 or 5 individuals cook for each other over a span of 5 days and they then score each other on how good the food was and how their evening went – it is quite amusing! The winner takes away with them Â£1000 GBP.

However, the 4Gamers Dual Charge ‘N’ Stand doesn’t have any functional features. Although there’s no major added value to it, I love the way it adds a little style to your TV unit/PS3/room. To charge your pads, if not already done so, simply sit your pads onto the stand, plug your USB cables into your pads and let them recharge themselves without worrying about someone tripping over the wires!

If you’ve not yet switched over to HDMI, then you’re missing out on a fantastic trick. Once you’ve played your PS3 in HD, you will never go back to A/V! The HDMI cable included in this pack offers the following:

The cable itself consists of a robust build. The one feature that stood out for me was the triple shielded covering – it looks solid! When a few of my friends saw the cable, they instantly wanted one as they do look very nice, and like they will last for a loooong time. 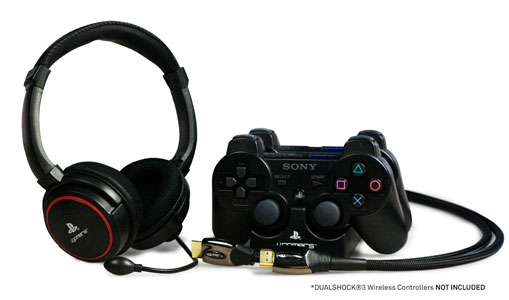 I’m VERY impressed with the quality of the goods developed by 4Gamers. It’s no surprise they’re receiving raving reviews for their products. If I need another headset, this package would definitely be on top of my shopping list. The package itself is certainly value for money. The quality and build of each of the products is of a high standard, and as they’re PlayStation Approved – that gives me peace of mind and comfort knowing they will have been through some thorough testing before Sony will have rubber stamped their approval for mass production.

For those that reside in the US, although these products are currently not on sale within the States, 4Gamers are working very hard behind the scenes to bring their products to you very soon. The next time you’re in a games store – keep an eye out for some 4Gamers gear – you may just find a 4Gamers COMM-PLAY Performance Gaming Kit sitting on that shelf!

Last but not least, keep your eyes on this site – we’re going to be giving one of these packages away to ONE lucky winner!

Please note: Dualshock Wireless Controllers are not included in the package.

The End Of Metal Gear Online