Today I got a look at two things I have yet to get my greasy gamer paws on: the Playstation Vita and the Vita game “Tales From Space: Mutant Blobs Attack!”. While the Vita I immediately reached for was only a dev unit, it was rather weighty and much larger than its predecessors. That’s not the focus of this article though, Mutant Blobs is what I’m going to talk about. And talk about it we shall; in great detail.

A blustery, windy, chilly day in the city is no surprise. Conducting an interview with a calm, collected, zen-like master like Ryan MacLean … is. Plus he’s got a beard (I’m still rocking my SF Giants World Series beard) so i instantly feel at ease with the CEO of DrinkBox studios. MacLean greeted me warmly and I found myself a seat on the couch via the opposite corner of MacLean. Like a hyperactive 6 year old, I immediately grab the Vita. Not stopping and thinking, “Hey, I’m supposed to conduct an interview here..”. MacLean takes the reins and talks about DrinkBox Studios (a small Toronto based company) and tells me “a total of 8 people” worked on the game and followed it through to it’s completion. 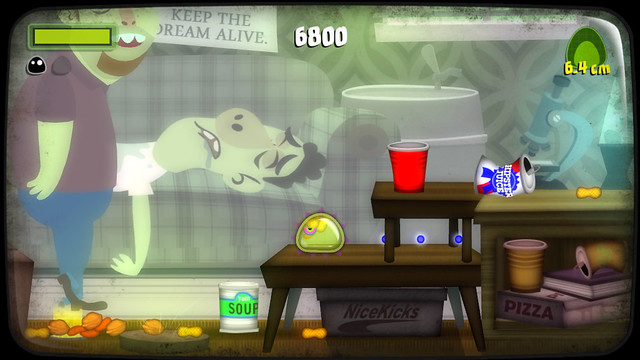 The main protagonist of this Vita downloadable game is a friendly looking green blob that can mold, attach, squish, roll, eat, enlarge and steamroll its way into your heart. Sackboy lovers prepare to make room in your heart for what I think is a shoe-in for the “new mascot” nomination for the Vita. The overall gameplay if I had to compare it to another Playstation title would be “Little Big Planet” meets “Uncharted”. Combined with multi-cultural references in the back and foreground of this highly addictive side-scrolling title, you’ll be sliming your way through levels and avoiding laser beam pitfalls. On top of all that, you have collectibles to go after. A set number of collectibles reside in each level and let me share a secret with you: they’re a little tricky to get. It takes patience and a slick understanding of each level to snag’em.

The following is a true fact: I have never played the Vita…until now.

Now with this in mind, Mutant Blobs is my first crack at any Vita game. After about 15 minutes in and on much higher levels that MacLean was kind enough to show/walk me though, I started learning the ropes. Although there came a puzzle part which I had no idea what to do, so I handed the Vita to MacLean and said “You do it!”. Not frustratingly mind you, but I didn’t want to make the man suffer and watch struggle with this like two pigs fighting over a milk dud.

Gameplay in itself is fascinating and there’s so much to engage the gamer. There’s laser beams and giant pitfalls and even bigger cog wheels you can attach to and repel off of. Places in-game to perform smash moves to break through even bigger destructible barriers. What can you say to a game like this – other than: “Let’s shake it and break it!” I then dove in with Ryan MacLean, giving me pointers and the occasional bailout move. What’s even more cool about the game is it utilizes everything the Vita has to offer, including a nice little trophy list.

Maybe not a jaw dropping fact in itself, but when you go through Mutant Blobs gameplay and all the gaming control, touch control, trigger controls, tilt control, graphics, smooth animation, jazzy music, smile-inducing cutscenes… that’s kind of a tall order. What’s even more fascinating is the price point being offered for Mutant Blobs: it’s a paltry $7.99 USD. Available on the Playstation Store starting February 21. I then concluded my guided tour of three levels hand-picked by MacLean himself, I then decided to ask some questions that came to mind. 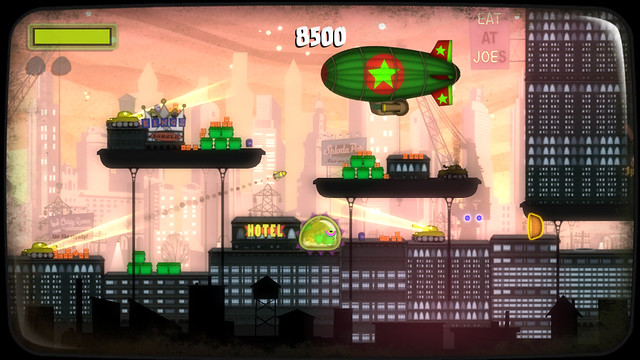 First up was my inquiry about the “Pass-N-Play” feature on most handheld gaming rigs? Not in this case would be the answer. Co-Op is also not going to be in this game reveled MacLean. Don’t fret true believer, MacLean was quick to deter any previous bad news with “anything is possible” and DLC for this Vita downloadable was hinted at, but certainly not confirmed. MacLean & the DrinkBox crew were quick to add bits of information like bonus levels that are included and unlock as you progress through the game, creating an even bigger and more expansive experience for the Vita gamer.

I was then shown and allowed to play a bonus level.

Now this is right up my alley! Using only tilt controls for this particular bonus level, I became a rolling ball of destruction. Swallowing and engulfing anything onscreen, people feared me, cars trembled at the sight of me and construction zone barriers became tasty little morsels. A chaotic and destructive pinball-like level, the blob gets bigger with every item/person/car you eat and the more you eat – the BIGGER you get – until you’re pretty much unstoppable. The bonus level has a quirky bezel design, that being of a GameBoy bezel (aptly renamed GameBro) and when I asked if PlayStation had said something to say to DrinkBox about the obvious nod to the Nintendo handheld? The official response was: “they didn’t seem to have a problem with it”, I joked back with “I’m sure they probably were a little sour grapes with it”. We all had a nice little chuckle together and I finished the bonus level with a respectable (noobish) score and was left seriously wanting more of this amazing downloadable title. 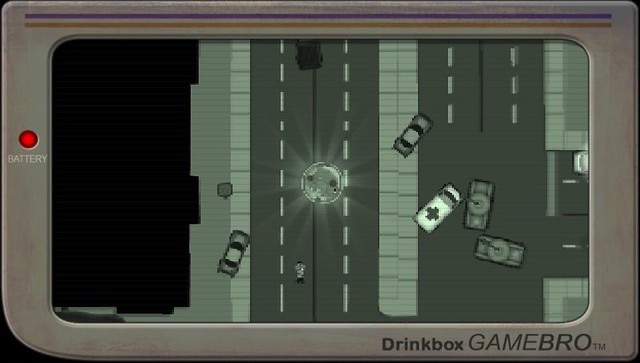 The PlayStation Vita is still in its infancy stage with developers still working on games and figuring out way to make a game that truly works on the Vita. DrinkBox has done just that: they’ve made a game that works. It finds an odd and sometimes very odd balance to a gaming handheld that few Vita titles have been able to master. As far as being a Vita title, this is definitely a must own for any Vita owner. And if you plan on picking up a Vita make sure to pick this title and slime your way to the PSN store and grab this title for an amazingly affordable price point of $7.99 USD starting on February 21.

This review is based on the PS Vita version of Tales From Space: Mutant Blobs Attack! developed by DrinkBox Studios.

With that being said and mainly because yours truly is so awesome. Mr. MacLean was kind enough to extend a free version of the game included on this game voucher (see picture) he gave me at the end of the interview. Here’s what you got to do:

What name would you give the blob in Tales From Space: Mutant Blobs Attack? 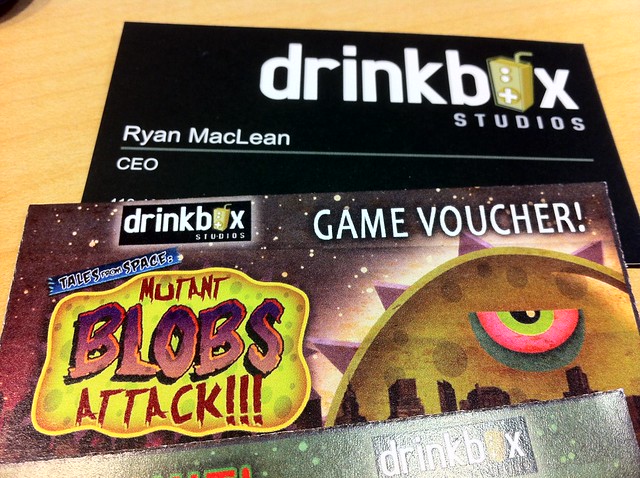 And be sure to show DrinkBox some love via the official Mutant Blobs Attack blog at www.mutantblobsattack.com, @MutantBlob on Twitter, and DrinkBox Studios on Facebook. Having a Vita or planning to get a Vita will also help with this contest, as the game is only for the Vita. Contest will end on February 20, so it gives everyone enough time to enter.