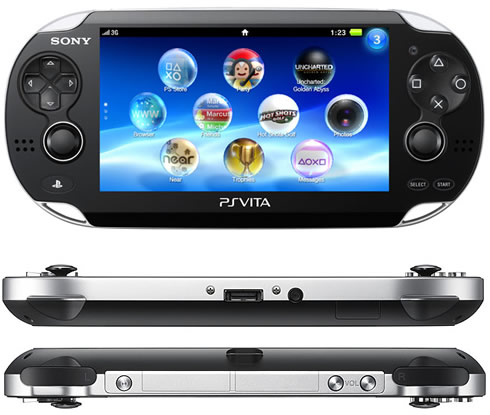 When you first turn on the Vita, it needs to do a system update. DO NOT use your existing PSN/SEN login until after the update is done and you’ve passed the initial setup step. If you logically choose to use your existing PSN/SEN login, then the Vita will error saying you need to install the system update first. But you can’t install the system update until you’ve passed those setup screens. This is basically a major setup bug with an easy workaround. I spent hours frantically trying to get this thing to update via the PS3 and my Windows laptop (you don’t need either) before I posted my issue online, and figured out the simple but illogical workaround.

Having hybrid controls — both console sticks/buttons and smartphone touch/tilt — is amazing. Touch works so much better for any type of menus or item management screen. Physical buttons and sticks are critical for action mechanics. The back-touch is brilliant for touch control when you don’t want to hide the screen with the player’s finger.

One wish list item: the sticks and buttons are rather small. The biggest problem is that the analog sticks have limited range and precision. I’m hoping the Vita gets some quality aftermarket stick extenders (like these). Actually, stick extenders are completely inevitable.

A second wish list item: why don’t games allow tilt to look? Have you used Google Sky Maps where you physically move your phone or tablet and it acts like a virtual window to see the stars? Why can’t they have games like that, where you move the Vita itself to see into the game, rather than using an analog stick?

The web browser is way better than PS3, but still way behind a decent smartphone. That seems to be a general pattern. My Android phone does all the non-gaming functionality much better, but I’m still glad the Vita has usable versions of these apps.

The OS is generally much nicer than PS3/360. A phone-style touch screen centric interface is much easier than XMB. Jumping in and out of a game is lightning responsive, but starting a download, or activating any network feature seems sluggish. Still, this is a big improvement over the PS3.

Wishlist: Don’t show games in the main browse area that require a cartridge to play when the cartridge isn’t installed. Personally, I’m buying most of my games as downloads so I don’t have to deal with this.

Stardust is the perfect starter game for me, because it’s so familiar and still fun to play. It has a lot of improvements since the PS3 version. The optional “Delta” controls are silly, but the core game controls are perfect. The main action controls are just like PS3, the Vita’s small analog sticks work perfectly, and this game adds a subtle tilt-look effect and touch-screen menus. This has tons of cool game modes and is a very content rich title.

Lumines is the best in the series. They added some really mind blowing graphic effects to the different skins. For a falling block game, I really didn’t expect amazing visuals like this. There are tons extras, modes, leveling RPG mechanics that I have only started to scratch the surface of. $35 (on PSN) seems like a lot of a Lumines game, but there’s definitely a lot of content and depth here.

Escape Plan is a clever puzzler that uses the touch + back touch in a natural and fun way. So far it’s a great puzzler.

Uncharted looks technically amazing. I’m not in the mood for an action adventure game, but this is a nice game to see the graphical potential and polish of the Vita.

Overall, a great launch lineup. Stardust and Lumines are established franchises, but these iterations have deep improvements and are surprisingly content-rich; usually launch games are simpler, shallower experiences.

2012 has a really strong lineup ahead. Personally, I’m dying to play Motorstorm RC, Sound Shapes, LittleBigPlanet, and possibly Gravity Rush. Additionally, I’m hoping to see some of the great third party 2012 titles show up on Vita as well.