Uncharted is a game that needs no introduction. Nathan Drake and friends have molded themselves deeply in the hearts of many gamers in the past with Uncharted 1, 2 and 3 on the PS3, and Golden Abyss is no different.

Sony Bend made Golden Abyss in such a fashion that it shows off most of the new control schemes for the Vita. Some are cumbersome while others work very well.

One of the first things I noticed was the stick sensitivity for aiming. I had a hard time getting heads shots, or any shots at all for that matter, but after messing with it for a while, I noticed that tilting the Vita helped hone in on shot accuracy. Basically you move the aiming reticule as close to an enemy as possible, then just slightly tilt/yaw the Vita to maximize accuracy. My only problem with it is the tilt motion is inverted with no option to reverse it that I can find.

Like Uncharted 1, there are a few QTE’s involved in the gameplay, but unlike the first Uncharted, these are done with the touch screen. Several fights will require you to swipe the screen in a certain direction. Cutting bamboo may force you to basically draw a letter Z on the screen. All of this is done pretty well, with the exception of having to clean off objects or treasures that you find along the way. 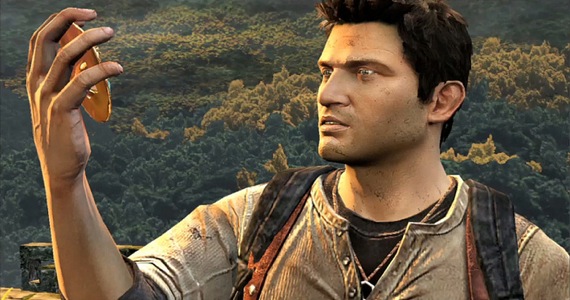 Speaking of treasures, if you are one of the OCD treasure/trophy finders in games, then Uncharted: Golden Abyss will tickle your fancy. There are tons of treasures everywhere, with a unique journal method of documenting them. All treasures are put into categories. When you complete a category, you get an additional trophy, but these treasures could be spread over several chapters and once completed will queue a monologue to tell you about the final result of all the clues that you found.

Many of these treasures are well hidden, even more so than the PS3 versions in my opinion. However, not all are shiny golden treasures. Some hidden treasures fall under the “mystery” category, such as taking a picture of certain objects with Drakes handy little camera (this thing must be rugged because Drake takes a beating, yet his camera always works…). Other mysteries are charcoal rubbings which makes use of the touch screen as well.

The story is good, but did not suck me in like the other Uncharted titles did. It just seemed a little dull overall. Drake has a friend with a questionable moral compass who leads Drake through several inconvenient situations where he meets a girl with good intentions and gets very close, which results in him getting into even more trouble than if he had just stayed with the horrible friend to begin with.

All in all, Uncharted: Golden Abyss is a GREAT game and an excellent way to introduce a new console. The game does feel like the console versions through and through, but with portable gaming style additions which do not detract from the immersion at all.

*You will notice below that I put “PS3 experience on a mobile device” as a pro and as a con. Some people really like that idea, others do not. As such, it can’t really be called a pro or a con but it is important enough to potentially sway someone’s opinion of the game so I felt the need to add it in.