– Making of DVD – interviews with the developers from Piranha Bytes who delve deeper into the production of Risen 2.
– Soundtrack CD – The gripping tunes of the Risen 2 soundtrack will immediately absorb the listener into this fantastic pirate world.
– Double-sided poster – a large sized map of the game world on one side and an epic artwork featuring the hero and his crew on board their impressive ship.
– Pirate Flag – with the skull motif from Risen 2.
– Amulet – a pendant that every pirate and Risen 2 fan will be proud of.
– The Art of Risen 2: Dark Waters – an exclusive collection of art cards on high quality-paper.
– Three Risen 2 stickers. 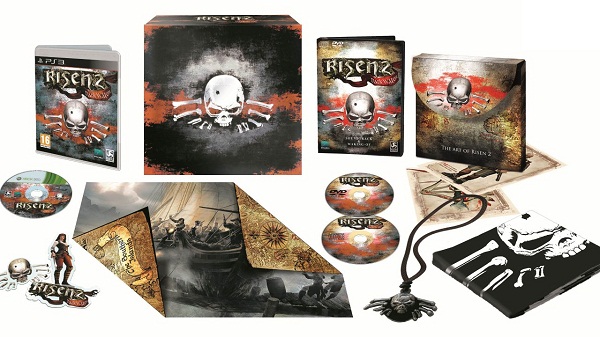 Risen 2 was officially announced by Deep Silver back in 2010. The game will offer a semi-open world, as you will be able to move freely within each island. Not all islands will be reachable, but they will become so once the story unfolds. Risen 2: Dark waters will be available on April 24th, 2012. For more information, visit Risen 2 official website. There are a few gameplay videos from the beta available on youtube. Also, check out the official cinematic trailer below.