Cast your mind back to a distant past, November 15 in the year 2011 to be exact. Modern Warfare 3 and Skyrim have just been released and Uncharted 3 has been out for 2 weeks alreadyâ€¦ even Whitney Houston is alive. Need for Speed: The Run was released on this day. Now you might be asking what was so significant about this event to be brought up now? Was Need for Speed: The Run a truly amazing game that slipped us by? Letâ€™s find out in our review.

EAâ€™s fixation with going fast has taken a dramatic turn in NFSâ€™ 18th outing, adding a plot to the action once again, along with foot chases to complement its car based action. Rather than doing a Driver 2 and allowing you to walk around, these are reduced to quick time events, so I hope you like pressing X not to die! The plot is little more than an excuse for the action with a simple set up: win the race from coast to coast otherwise, the world will end or something of equal dramatic effect. In fact, weâ€™re never given a reason why these mobsters want him dead or what he needs the money for. Maybe Jack didnâ€™t pay his gas bill or will be forced to repeat a year at school if he doesnâ€™t win. It made me so unempathetic towards the Jack and his impossibly attractive female companion, even the ending is more anti-climactic than Lostâ€™s. 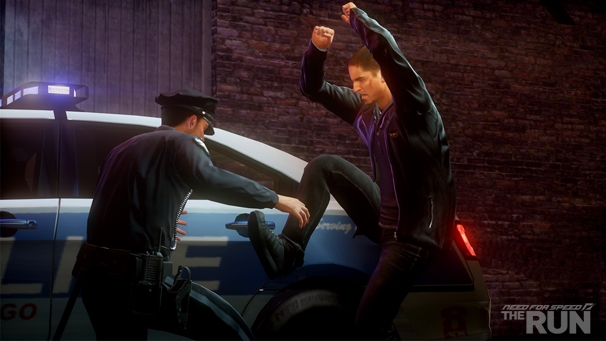 The plot merely serves as a reason to drive from point A to point B across the USA as fast as possible. The only difference in events being whether you overtake a certain amount cars, make checkpoints in time, or avoid hazards whilst evading police/the mob. There isnâ€™t as much diversity as in the previous Hot Pursuit, which featured weapons and swapping sides to the police in pursuit. In fact, the lack of means to defend yourself leads to some frustrating races towards the end as your car gets turned to Swiss cheese whilst youâ€™re trying to win a race. Youâ€™ll get to the end quickly, too, with The Run mode lasting around 2 hours. Itâ€™s not long game by any stretch of the imagination, especially when I recall driving from SF to Vegas in real life taking a few days.

Itâ€™s a racing game, though, so plot doesnâ€™t matter. Itâ€™s all about the on track action and it canâ€™t get that wrong, surely? Unfortunately, this is where things get even worse, as The Run displays some of the heaviest, bogged down and perennially understeering cars ever to grace a video game. These Porsche 911 Carreraâ€™s, Mustangs and Audi R8s are supposed to be supercars, yet, they all handle like front wheel drive tanker ships missing every apex. Trying to coerce them into a drift is like asking your divorced parents to get along for your birthday; they try to get along but ultimately just donâ€™t cooperate, ending in an awkward mess. 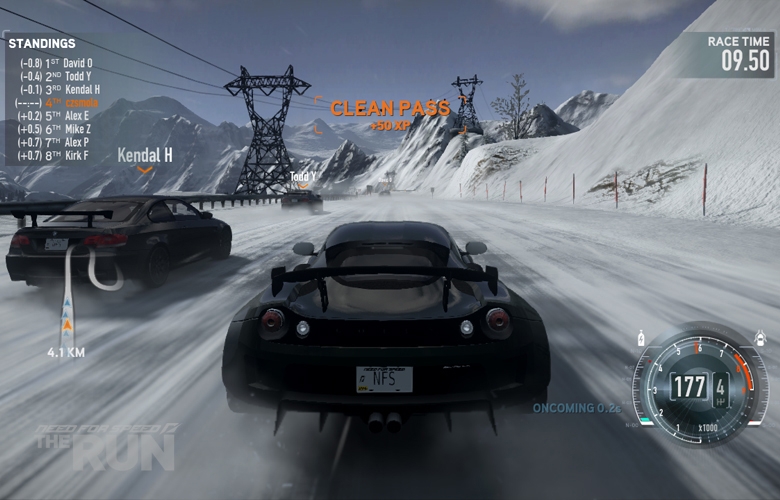 Thankfully Autolog makes another fine appearance in The Run, adding a Speed Wall to every event. Itâ€™s still a genius idea that adds life to a short career mode for those who enjoy one-upping their friends. Updates alert you when your records are broken and experience points are earned for beating your friendsâ€™ records. These experience points and unlocks carry over into all the game modes on and offline, unlocking cars, avatars and profile backgrounds, allowing you to go back to that previous event with a faster car.

Driving coast to coast in the USA provides ample variety in racing locations, from the Plains to Death Valley and the Rockies, with dust storms and avalanches creating some interesting hazards to keep you on your toes. All the racing action takes place on public roads and even subways, resulting in plenty of traffic to evade, particularly in the busy streets of Las Vegas, New York and San Francisco. Driving around Chicago has a nice cinematic feel, too, due to many blockbusters being filmed there in recent years and being underused in the gaming sphere.

The Run, in fact, aspires to be like the blockbusters it is emulating a little too well. It might all be Teal and Orange with over the top action, but itâ€™s also desperately light on plot and fun. Include the awful handling and a cripplingly short run time with challenges that offer little variety, and you have quite the box office flop. Need for Speed: The Run leaves you with that same unsatisfied feeling after watching that big, dumb summer flick with some short thrills, nice visuals and sound design, but ultimately offers little else. Itâ€™s impossible to recommend The Run when there is a vastly superior Hot Pursuit was released just a year ago. Buy that instead.

*A review copy was sent to PS3Blog.net by EA for reviewing purposes.